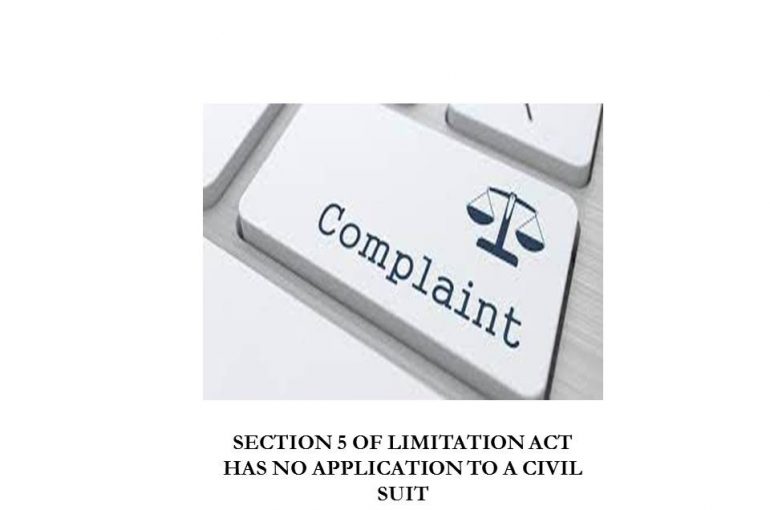 A Division Bench of the Hon’ble Supreme Court of India comprising of Justices Sanjiv Khanna and Bela M. Trivedi passed a Judgment dated 21-01-2022 in the case of Sunil Kumar Maity & Anr. v. State Bank Of India And Anr. {Civil Appeal 432 of 2022 (Arising out of SLP (Civil) No. 21711 of 2019} and held that Section 5 of the Limitation Act, 1963 does not apply to the institution of civil suit in a Civil Court.

For the convenience of the readers, Section 5 of the Limitation Act pertains to extension of prescribed time in an appeal if the Court is satisfied that there is sufficient cause for the delay caused  by the litigant and that the litigant should be allowed to file the appeal or application as he has been able to show sufficient cause for the delay.

—Any appeal or any application, other than an application under any of the provisions of Order XXI of the Code of Civil Procedure, 1908 (5 of 1908), may be admitted after the prescribed period, if the appellant or the applicant satisfies the court that he had sufficient cause for not preferring the appeal or making the application within such period. Explanation.— The fact that the appellant or the applicant was misled by any order, practice or judgment of the High Court in ascertaining or computing the prescribed period may be sufficient cause within the meaning of this section.

The Complaint was allowed by the Consumer Forum. Aggrieved an Appeal was filed in the SCDRC by the Respondent-Bank. The SCDRC upheld the Order of the Consumer Forum vide Order dated 25-10-2017 except to the extent of fine imposed. Thereafter, the Respondent Bank approached the NCDRC by way of Revision Petition. The Revision Petition was allowed by the NCDRC and the Complaint was dismissed, giving liberty to the Appellant to approach a competent civil court.

The Bench while allowing the Appeal opined that:

“12. The National Commission therefore has grossly erred in observing in the impugned order that the appellant-complainant would be at liberty to seek remedy in the competent Civil Court and that if he chooses to bring an action in a Civil Court, he is free to file an application under Section 5 of the Limitation Act, 1963, recording the statement of Ld. Counsel for the SBI that it will not press the issue of limitation if action is brought by the complainant in a Civil Court. Such an observation/order passed by the National Commission is in utter ignorance of the provisions of the Limitation Act, in as much as Section 5 of the Limitation Act does not apply to the institution of civil suit in the Civil Court. Be that as it may, the impugned order passed by the National Commission solely relying upon the suo-moto report called for from the respondent-bank during the pendency of the revision application, being highly erroneous, deserves to be set aside and is accordingly set aside.”

Generally, Section 5 of the Limitation Act, 1963 which talks about sufficient cause for condoning a delay in filing of an appeal or application, applies to cases where the litigant is able to show sufficient cause for not being able to file the said appeal or application within the prescribed time. However, that is not to say that Section 5 can extend the time limit for filing a civil suit if the litigant decides to do so after the prescribed time is over. For filing of civil suits, the law is very clear that once limitation starts it continues running till the period is over and cannot be extended for any reason. Hence, the NCDRC Order was completely off the point and has rightly been set aside by the Apex Court.