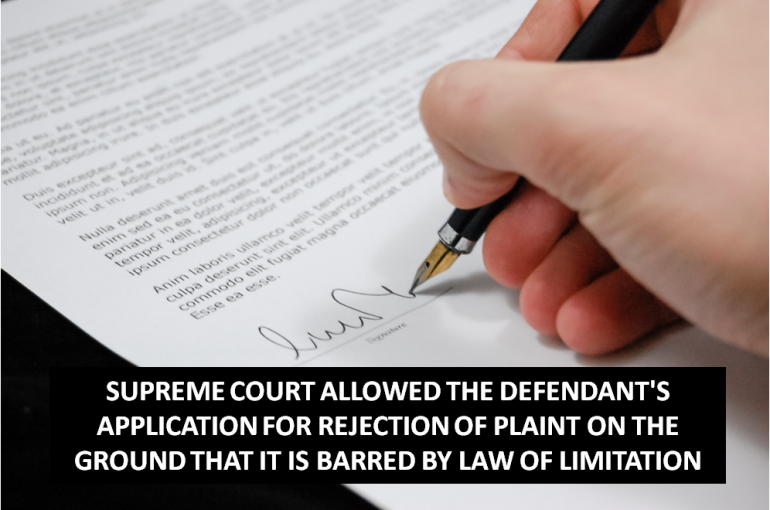 A two Judge Bench of the Supreme Court presided by Justice M.R.Shah and Justice Krishna Murari, passed a Judgment dated 30.09.2022 in C.S. Ramaswamy vs V.K. Senthil & Ors. in CIVIL APPEAL NO 500 OF 2022 and other connected cases and thereby quashed the Orders passed by the Madras High Court rejecting the Applications filed by the Defendants under Order VII Rule 11 of Code of Civil Procedure, 1908 (CPC) (Rejection of Plaint) seeking rejection of the respective Plaints filed by the Appellant.

The Original Plaintiffs (Seller/Owner) had filed the Suits before the learned Trial Court for cancellation of Sale Deed executed by the Plaintiffs in favor of the Appellant–Defendant (Buyer) as null and void and also to declare that the Plaintiffs are the absolute owners of the Suit Schedule Property and consequently restrain the Defendant from alienating the Suit Schedule Property in any manner.

The Appellant- Defendant filed Applications before the learned Trial Court seeking rejection of the respective Plaints under Order VII Rule 11(d) of the CPC mainly on the ground that the respective Suits were clearly barred by the law of limitation. The Plaintiffs resisted the Sale Deeds contending that it was obtained by fraudulent misrepresentation of the character of the document, i.e., as if it is a Joint Development Project, and was executed without knowing the contents of the documents.

The learned Trial Court dismissed the Applications under Order VII Rule 11 CPC by observing that the issue of limitation is a mixed question of law and facts. The Defendant filed the Revision Petitions before the Madras High Court which was also dismissed and therefore, Civil Appeal was filed before the Supreme Court.

Shri Kapil Sibal, Learned Counsel appearing on behalf of the Appellant submitted that the Sale Deeds, which sought to be cancelled, were executed in the year 2005 and the sale consideration was paid by demand drafts and the same were credited into the bank accounts of the Plaintiffs. As per Article 99 of the Schedule under the Limitation Act, 1963, time period to bring in a suit to set aside a sale by a civil court is one year from the date when the sale is confirmed or would otherwise have become final and conclusive. However, the Suits have been filed in the year 2016, i.e., after a lapse of more than 10 years and so the said Suits are clearly barred by the law of limitation. It was vehemently submitted that vague averments with respect to the date of knowledge of the alleged fraud and the documents cannot be permitted to bring the Suits within the purview of limitation issue.

It cannot be said that the Plaintiff was not aware that the sale deeds were for the purpose of Joint Development Project, as with respect to the said sale deeds, earlier a suit was filed by a minor to which some of the original Plaintiffs were also parties and the said suits came to be dismissed in the year 2014.

Shri Sushil Kumar Jain, on behalf of the Respondents submitted that there is specific cause of action pleaded in the respective Plaints and the issue with respect to limitation is a mixed question of law and facts and therefore, such an issue of limitation is required to be considered at the time of trial.

It was also submitted that under Section 17 of the Limitation Act, the period of limitation shall begin to run only from the date of discovery of such fraud and as per the averments and allegations in the Plaints, the Plaintiffs came to know about the fraud in the year 2015 and therefore, the Suits cannot be said to be barred by limitation.

The Supreme Court considering the averments and allegations of the Parties, observed that even according to the Plaintiffs, the cause of action for the Suit arose on 19.09.2005, the date on which the Plaintiffs executed the Sale Deed in favor of the Defendant. The Apex Court further said that it is not understandable how on visiting the Suit Property, the Plaintiffs could have known the contents of the Sale Deed and/or about the alleged fraudulent sale.

The Supreme Court observed that “Even the averments and allegations in the plaint with respect to fraud are not supported by any further averments and allegations how the fraud has been committed/played. Mere stating in the plaint that a fraud has been played is not enough and the allegations of fraud must be specifically averred in the plaint, otherwise merely by using the word “fraud”, the Plaintiffs would try to get the Suits within the limitation, which otherwise may be barred by limitation.” Further it also held that “The Plaintiffs cannot be permitted to bring the Suits within the period of limitation by clever drafting, which otherwise is barred by limitation”.

The Apex Court relied on a decision in the case of Raghwendra Sharan Singh Vs. Ram Prasanna Singh (Dead) by Legal Representatives, (2020) 16 SCC 601 where it had considered all earlier decisions on exercise of powers under Order VII Rule 11 CPC in paragraphs 6.4 to 6.9 as under:

“6.4. In [T. Arivandandam v. T.V. Satyapal, (1977) 4 SCC 467], this Court in para 5 has observed and held as under , “5………….The learned Munsif must remember that if on a meaningful — not formal — reading of the plaint it is manifestly vexatious, and meritless, in the sense of not disclosing a clear right to sue, he should exercise his power under Order 7 Rule 11 CPC taking care to see that the ground mentioned therein is fulfilled. And, if clever drafting has created the illusion of a cause of action, nip it in the bud at the first hearing by examining the party searchingly under Order 10 CPC. An activist Judge is the answer to irresponsible law Suits.”

6.5. In Church of Christ Charitable Trust & Educational Charitable Society v. Ponniamman Educational Trust, (2012) 8 SCC 706], this Court in para 13 has observed and held as under: “13. While scrutinizing the plaint averments, it is the bounden duty of the trial court to ascertain the materials for cause of action. The cause of action is a bundle of facts which taken with the law applicable to them gives the Plaintiff the right to relief against the Defendant. Every fact which is necessary for the Plaintiff to prove to enable him to get a decree should be set out in clear terms……….”

“12. A cause of action means every fact, which if traversed, it would be necessary for the Plaintiff to prove in order to support his right to a judgment of the court. In other words, it is a bundle of facts which taken with the law applicable to them gives the Plaintiff a right to relief against the Defendant. It must include some act done by the Defendant since in the absence of such an act no cause of action can possibly accrue.………”

6.7. In Sopan Sukhdeo Sable [Sopan Sukhdeo Sable v. Charity Commr., (2004) 3 SCC 137] in paras 11 and 12, this Court has observed as under: “11. In ITC Ltd. v. Debts Recovery Appellate Tribunal [ITC Ltd. v. Debts Recovery Appellate Tribunal, (1998) 2 SCC 70] it was held that the basic question to be decided while dealing with an application filed under Order 7 Rule 11 of the Code is whether a real cause of action has been set out in the plaint or something purely illusory has been stated with a view to get out of Order 7 Rule 11 of the Code. 12…….”.

6.8. In Madanuri Sri Rama Chandra Murthy v. Syed Jalal, (2017) 13 SCC 174, this Court has observed and held as under: (SCC pp. 178- 79, para 7) “7…..It is needless to observe that the power under Order 7 Rule 11 CPC can be exercised by the court at any stage of the Suit. The relevant facts which need to be looked into for deciding the application are the averments of the plaint only……”

6.9. In [Ram Singh v. Gram Panchayat Mehal Kalan, (1986) 4 SCC 364], this Court has observed and held that when the Suit is barred by any law, the Plaintiff cannot be allowed to circumvent that provision by means of clever drafting so as to avoid mention of those circumstances, by which the Suit is barred by law of limitation.”

Thus, based on the aforesaid grounds, the Supreme Court allowed the Appeals and Applications seeking Rejection of Plaints on the ground that the Suit was barred by law of limitation. As a result, the Impugned Judgment and Order dated 30.09.2022 of the Madras High Court was set aside.