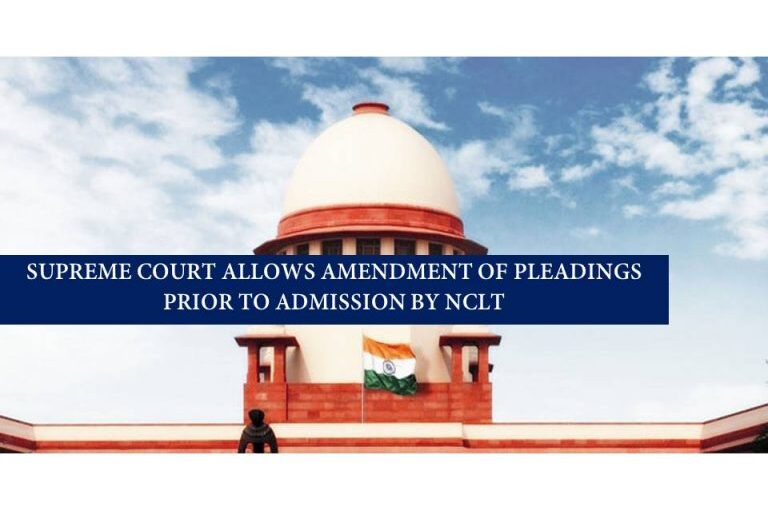 SUPREME COURT ALLOWS AMENDMENT OF PLEADINGS PRIOR TO ADMISSION BY NCLT

Recently, the Bench of the Hon’ble #SupremeCourt of India in the case of Dena Bank vs. C. Shivakumar Reddy [CA 1650/2020] vide its Judgment dated 04-08-2021 held that there is no #bar in allowing #amendment or filing of additional documents with respect to Application for initiating Corporate Insolvency Resolution Process (#CIRP) under Section 7 of the Insolvency and Bankruptcy Code, 2016 (#IBC).

Thereafter, the Appellant Bank filed an Application before the Debt Recovery Tribunal, Bengaluru (DRT) being O.A. No.16/2015 under Section 19 of the Recovery of Debts and Bankruptcy Act, 1993 in 2015. However, the Corporate Debtor requested for restructuring of the Term Loan and gave a proposal for one time settlement of the Term Loan Account, upon payment of Rs.5.50 Crores. The Appellant Bank did not accept the same.

Thereafter, the Appellant Bank issued a Demand Notice to the Corporate Debtor and filed the Insolvency Petition being CP(IB) No.244/BB/2018 before the Adjudicating Authority under Section 7 of the IBC in the year 2018.

The Appellant Bank filed an Application in CP (IB) No.244/BB/2018 before the Adjudicating Authority for permission to place on record additional documents, including the Final Judgment and Order dated 27.03.2017 of the DRT in OA No.16/2015 and the Recovery Certificate No. 2060/2017 dated 25.05.2017 issued by the DRT. The Respondent contended that the said Company Petition was barred by limitation.

The Adjudicating Authority, vide its Order dated 04-02-2019 allowed the Application and directed the Appellant Bank to file an amended petition enclosing the documents referred in its Application.

The Supreme Court answered the aforesaid issue in negative and observed that:

In view of this, the Supreme Court set aside the NCLAT Order and upheld the NCLT Order dated 21-03-2021. It further held that there is no bar in law to the amendment of pleadings or to the filing of additional documents in an Application under Section 7 of the IBC in the absence of any express provision which either prohibits or sets a time limit for filing of additional documents.