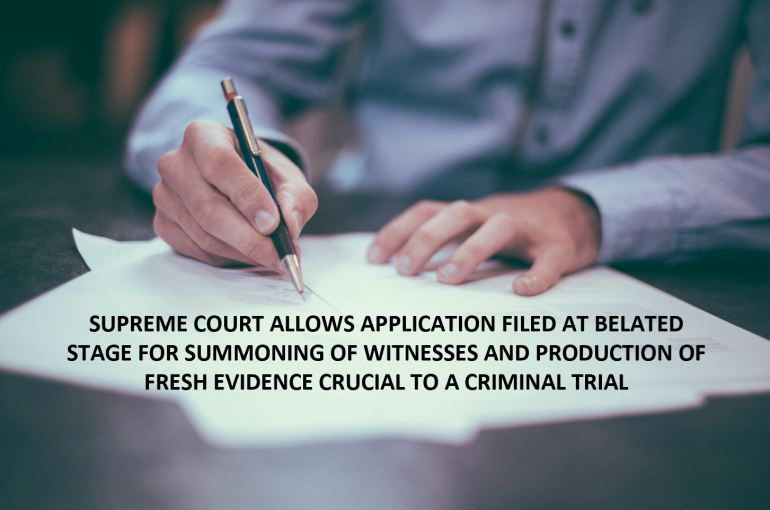 Recently, a two Judge Bench of the Supreme Court comprising of Justice D.Y. Chandrachud and Justice A.S. Bopanna made an observation regarding the power of Courts to allow examination of witnesses and adducing of fresh evidence at belated stage of trial, vide Judgment dated 08-08-2022 passed in the matter of Varsha Garg vs The State of Madhya Pradesh & Ors., Criminal Appeal No. 1021 of 2022.

In this case, one, Mrs Varsha Garg’s husband, an Advocate, (Deceased) was murdered outside his Office on 18-11-2015 around 11.30 pm. Following the incident, a First Information Report (FIR) bearing Criminal Complaint No. 734 of 2015 was registered at Mhow Police Station, Indore on 19-11-2015 under Section 302 of the Indian Penal Code 1860 (IPC) (Punishment for murder) read with Section 34 IPC (Acts done by several persons in furtherance of common intention). During the police investigation, the Post-Mortem Report indicated that the homicide was caused due to a firearm injury. Thereafter, the Police arrested Vikas (Accused No. 2), Sawan (Accused No. 3), Mangilal (Accused No. 4), Suresh (Accused No. 5) and Raju (Accused No. 6) and submitted a Charge-Sheet on 15-02-2016 and a Supplementary Charge-Sheet on 20-11-2016 and the case was committed to the Court of the Second Additional Sessions Judge, Dr. Ambedkar Nagar, District Indore (Trial Court) in Sessions Trial 227 of 2016 for trial as follows:

ii) In the Supplementary Charge-Sheet, Certificates of Nodal Officers of various Telecom Companies including Airtel, Reliance, Idea and Vodafone were submitted before the Trial Court along with call details of the Accused persons in a compact disc (CD). However, the Station House Officer (SHO) had not filed any certificate in respect of the CD as required under Section 65B of the Evidence Act 1872 (Admissibility of electronic records).

iii) Later, the CD was found to be corrupted. Hence, the State filed an Application before Trial Court for requisition of a copy of the CD which was available at the Police Station (First Application).

iv) The Trial Court allowed the First Application vide Order dated 15-11-2019 and directed the SHO to produce the CD on the next date, which he failed to comply with. Hence, the Trial Court rejected the First Application, as evidence of SHO had already been recorded and a last opportunity was given to him to produce the CD, which he failed to do so.

vi) Thereafter, the State filed an Application before the Trial Court on 15-03-2021 under Section 311 CrPC (Power to summon material witness, or examine person present) for summoning of decoding register to know the location of the call made by the Accused (Second Application). The relevant provision is reproduced below for easy reference:

viii) A Fourth Application was filed on 16-07-2021 by the State under Section 311 CrPC seeking permission to summon the Nodal Officer of Idea and under Section 91 CrPC (Summons to produce document or other thing) to produce the call data records of two mobile numbers.

x) Meanwhile, the Trial Court vide Order dated 13-11-2021 rejected the Second Application for production of the decoding register, as the said document was not part of the Police investigation. On the same date, the Trial Court also recorded that the evidence of Prosecution stood closed.

Aggrieved, the Appellant, wife of the Deceased, challenged the aforesaid Trial Court Order dated 13-11-2021 before the MP High Court invoking its jurisdiction under Section 482 CrPC (Saving of inherent power of High Court) in Misc. Criminal Case No. 57152 of 2021. A Single Judge of the Indore Bench of the MP High Court rejected the said Petition vide Judgment dated 08-04-2022 on the ground that (a) the decoding register was not part of the Police Case Diary or the Charge-Sheet, (b) the Prosecution had already closed its evidence and (c) the Second Application for production of the decoding register was filed at a very belated stage.

Aggrieved, the Appellant filed an Appeal before the Supreme Court challenging the High Court Judgment dated 08-04-2022 passed in respect of rejection of Second Application seeking production of the decoding register. The Apex Court passed a Judgment dated 08-08-2022 and made the following observations regarding the power of Courts to allow examination of witnesses and adducing of fresh evidence at belated stage of trial:

1) That as per Section 311 CrPC, the Trial Court may summon any person as a witness / for examination of any person / for recalling any witness who has already been examined. This power can be exercised at any stage of trial. Thus, the first part of Section 311 CrPC is discretionary.

4) Nevertheless, the Trial Court has ample power under Section 311 CrPC to summon any person as a witness / recall and re-examine any such person even if the evidence on both sides is closed and under Section 91 CrPC to issue summons to a person for production of any document or a thing, in the event that the Court feels that such evidence is essential for investigation / inquiry / trial / other proceedings. It is the duty of a Criminal Court to allow the Prosecution to correct an error in the interest of justice.

Thus, the Apex Court allowed the Second Application filed by the Prosecution for production of decoding register and for summoning of witnesses of the Telecom Companies for the said purpose and directed the Trial Court to conclude the Sessions Trial 227 of 2016 by 31-10-2022. As a result, the Appeal was allowed and the Trial Court Order dated 13-11-2021 and High Court Judgment dated 08-04-2022 were set aside.