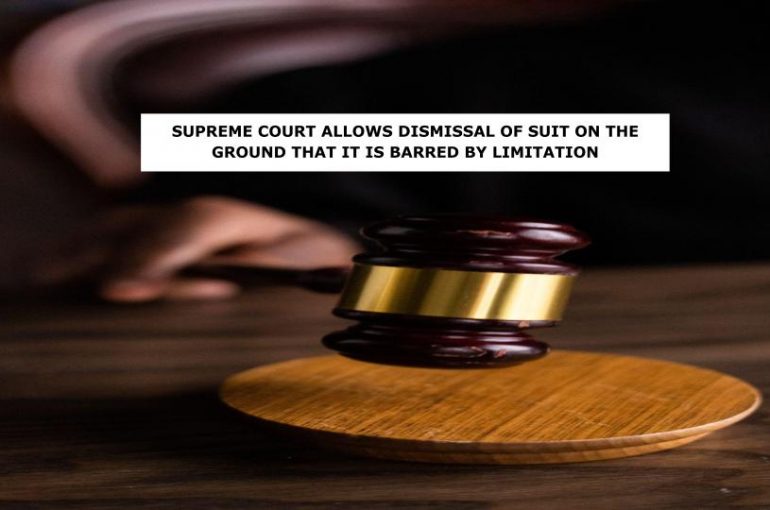 Recently, a two Judge Bench of the Supreme Court comprising of Justice Ajay Rastogi and Justice C.T. Ravikumar passed a Judgment dated 29-09-2022 in Sukhbiri Devi & Ors. Vs Union of India & Ors. Civil Appeal No.10834 of 2010, held that there is absolutely no perversity or illegality in the concurrent findings of the Trial Court and Appellate Court regarding dismissal of Suit on the ground that it was barred by limitation.

In a Village Naraina (Delhi), Shri Rama Nand, the predecessor-in-interest of the Appellants, Sukhbiri Devi and Others, was the bhumidar of agricultural land. The ownership of said land was vested by acquisition in Shri Rama Nand via Award No. 19/75-76 on 09.01.1976. Later the said land owner died leaving behind two sons – Nahar Singh and Dhan Singh and four daughters – Smt. Shakuntala Devi, Smt. Krishna Devi, Smt. Parvati Devi and Smt. Santhosh.

Due to change in Policies, the land of bhumidars were undertaken by the Government and in lieu of it, alternative plot was allotted. As per Letter No. No.F-31(11)/8/87/L&B/ALT/8226 dated 08.03.1991 alternative plot was allotted by Respondent Nos.1 to 4 in the exclusive name of one, Dhan Singh, Son of Deceased Rama Nand, via Registered Relinquishment Deed dated 21.10.1985. The above mentioned Deed came to the notice of Shri Nahar Singh, the other Son of Deceased Rama Nand, who thereupon filed an objection on 05.04.1991. He contended that alternative plot shall not be allotted in the exclusive name of Dhan Singh and fraud was practiced in obtaining the Registered Relinquishment Deed. However, on 14.05.1993, Nahar Singh died. The further legal actions were carried out by his widow and children.

In Suit No. 410 of 2000 filed on 14.06.2000, above mentioned averments were made in the Plaint. The Cause of Action as per said Plaint arose when an Application for alternative plot was made by the Defendant by playing fraud and claiming himself to be the sole and exclusive heir of Deceased Rama Nand. Thus, by way of the said Suit they sought to obtain declaratory decree.

The Trial Court vide Judgment dated 13.05.2005, dismissed the Suit on the ground that it was barred by limitation, as the Suit was filed in 2000, when the cause of action arose in 1985, i.e. beyond 12 years. Aggrieved by the said Judgment, the Plaintiff filed an Appeal in the High Court. The Appellate Court dismissed the Appeal No.99/2005 vide Judgment dated 08.12.2006. The Appellant then filed a Special Leave Petition No.34648 of 2009 under Article 136 of the Constitution of India before Supreme Court.

As related to the first Issue, two fold contentions have been raised by the Appellants. The Trial Court and Appellate Court were under mistake of law, as, if at all the Preliminary Issue on limitation was to be considered, it ought to have been made under Order VII CPC (Particulars to be contained in Plaint) Rule 11 (Rejection of Plaint) and then, at the most the Plaint could have been rejected in terms of Clause (d) of Rule 11 of Order VII, CPC. However, the said Courts adopted the wrong course by considering limitation issue under Order XIV Rule 2(2) CPC (Court to Pronounce Judgment on all Issue).

On this Respondent Counsel contended that the Plaintiffs did not seek to set aside Registered Relinquishment Deed dated 21.10.1985, as fraud was contended by them. Further, the Suit is barred by limitation as per the Act and the said Court had rightly dismissed as nothing further could survive for adjudication in the Suit thenceforth.

Numbers of Precedents in terms of Clause (d) of Rule 11 of Order VII, CPC were cited. As in Natarajan Vs. Ashim Bai & Anr. (2007) 14 SCC 183 it was held that “the plaints were rejected on the ground of being barred by Order VII, Rule 11(d), CPC unlike the case on hand where the suit was dismissed in accordance with the decision on the preliminary issue. This Court held that Order VII, Rule 11(d) would apply if the averments in the plaint were given face value and taken to be correct in their entirety appear to be barred by any law. Furthermore, it was held that in that regard the Court would not be entitled to consider the case of the defence”. With reference to Period of Limitation in Mt. Bolo vs. Mt. Koklan AIR 1930 PC 270 it was held “involving question of limitation in a suit for declaration of a deed as sham, this court considered the question of limitation under Article 120 of the Limitation Act, 1908 and held that the ‘right to sue’ would accrue when the defendant clearly and unequivocally threatened to infringe the right asserted by the plaintiff in the suit. Further it was held that every threat to such a right would not amount to a clear and unequivocal threat to compel him to file a suit and whether any particular threat would give rise to a compulsory cause of action would depend on the question as to whether that threat effectively invades or jeopardise the said right. In case on further deliberation a consideration of the case on hand in the light of the above decisions became inevitable, then we will undertake such an exercise”.

That the Plaintiff in the Plaint repeatedly averred that the said Deed was obtained by fraud. However, conspicuously the date of the Deed was not even mentioned. Similarly, Shri Nahar Singh even after having knowledge of the Deed, he has preferred his objections on 05.04.1991 which is beyond the period of limitation. He neither made attempt to cancel the Deed or set aside the Deed on the ground of fraud.

The Trial Court while dismissing the Suit No.410/2000 had determined the preliminary issue regarding the period of limitation with reference to the averments in the Plaint, hence, the dismissal of the Suit was in accordance with the decision on the said preliminary issue.

With respect to the second Issue, the Supreme Court observed that there was no sufficient cause for extending period of limitation beyond 12 years in the present case.

Thus, the Apex Court upheld the Trial Court and Appellate Court’s Orders for dismissal of Suit on the ground that it was barred by limitation and thereby, dismissed the Appeal.