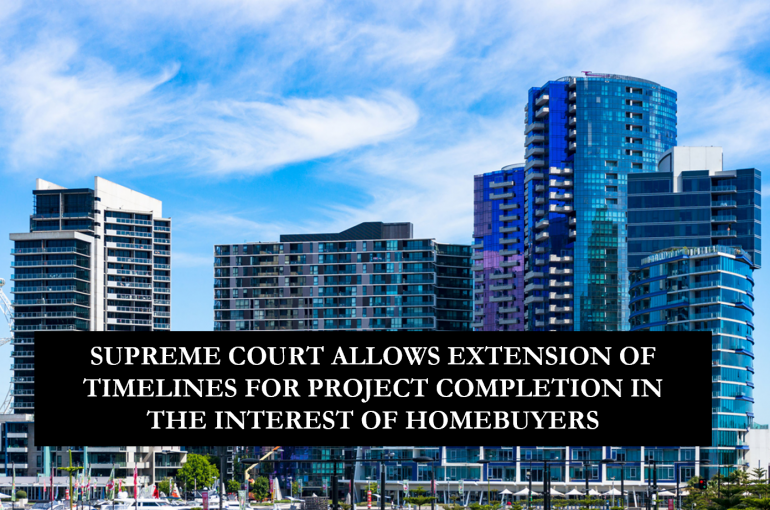 A Two Judge Bench of the Hon’ble Supreme Court of India comprising of Justice L. Nageswara Rao and Justice BR Gavai has recently passed a Judgment dated 27-04-2022 in the matter of Anand Murti vs Soni Infratech Pvt Ltd and Anr. Civil Appeal Nos. 7534 of 2021 and observed that if homebuyers prefer completion of housing project over seeking refund of advance paid and the promoter of the project is willing to complete the construction as per the timelines and conditions mutually agreed with the homebuyers, then it would be in the interest of the homebuyers to allow the housing project to be completed.

In the present case, the Respondent No. 2-Allottee had booked a flat in a housing project launched by M/s Soni Infratech Pvt Ltd (Corporate Debtor). Subsequently, owing to incomplete construction of the Housing Project, the Respondent No. 2-Allottee sent a Letter dated 31-07-2018 to the Corporate Debtor seeking cancellation of allotment of flat and refund of amount paid i.e. Rs. 32,27,591/-. When the Corporate Debtor failed to make refund of the amount, the Respondent No. 2-Allottee filed an Application under Section 7 of the Insolvency and Bankruptcy Code 2016 (IBC) before the Hon’ble National Company Law Tribunal, New Delhi (NCLT) seeking initiation of corporate insolvency resolution process (CIRP) in respect of the Corporate Debtor. As per Section 7 of IBC, allottees under a real estate project are considered as financial creditors and an application for initiating CIRP can be filed before NCLT jointly by not less than 100 of such allottees under the same real estate project or not less than 10% of the total number of such allottees under the same real estate project, whichever is less.

The NCLT, in this case, passed an Order dated 22-11-2019 and thereby, admitted the Section 7 Application and initiated CIRP in respect of the Corporate Debtor. An Interim Resolution Professional (IRP) was appointed by NCLT.

Aggrieved by the NCLT Order dated 22-11-2019, the Appellant, Mr Anand Murti, who is the Suspended Director of the Corporate Debtor, filed an Appeal before the National Company Law Appellate Tribunal (NCLAT) in Anand Murti vs Soni Infratech Pvt Ltd and Anr., Company Appeal (AT) (Insolvency) No. 1507 of 2019. The NCLAT passed an Order dated 19-12-2019 and directed the IRP not to constitute a committee of creditors (COC). The Appellant submitted that he was willing to settle the matter with the Respondent No. 2 and that the Project was 70-75% complete. The NCLAT vide Order dated 31-01-2020 directed the Appellant to file proposed settlement terms and details of completion of the Housing Project. Accordingly, the Appellant filed proposed settlement terms on 13-02-2020 and the IRP submitted his Report on 11-02-2020 stating that most of the allottees were willing to take possession of flats. Meanwhile, the Appellant and the Respondent No. 2 settled the matter. However, despite such settlement, the NCLAT vide Order dated 26-02-2020 modified its earlier Order dated 19-12-2019 and directed the IRP to go ahead with the CIRP process and constitute the COC on the ground that the settlement was only in respect of the Appellant and the Respondent No. 2 and not in respect of other allottees.

In pursuance of the Apex Court Order dated 05-03-2020, the Appellant filed a Modification Application being I.A. No.1115 of 2020 before the NCLAT in Anand Murti vs Soni Infratech Pvt Ltd and Anr., Company Appeal (AT) (Insolvency) No. 1507 of 2019. However, the NCLAT vide Order dated 22-11-2021, rejected the said Modification Application and further directed the parties to submit settlement terms, if executed with all the allottees for completion of Housing Project. The NCLAT further directed the IRP to hold COC meeting within ten days from the date of the said Order and decide the future course of action about resolution for completion of CIRP of the Corporate Debtor.

Aggrieved by the Impugned Order of the NCLAT dated 22-11-2021, the Appellant filed the Civil Appeal Nos. 7534 of 2021 before the Supreme Court. The Apex Court passed a Judgment dated 27-04-2022 and made the following observations in this case:

1) That as per the directions of the NCLAT, the COC Meeting was convened on 23-10-2021, wherein, the promoter and the authorised persons of Edelweiss Asset Reconstruction Company Ltd. (Financier of the Housing Project) presented a Modified Resolution Plan to the homebuyers and most of their concerns had been agreed to be taken care of by a statement made on behalf of the Financier.

2) That additionally, the Promoter of the Corporate Debtor submitted an Affidavit dated 27-12-2021 before the Supreme Court that they would return the money to those homebuyers who requested for refund, at 6% per annum interest, after completion of Phase-1 of the Project and that they would give possession of flats to the other homebuyers who requested for possession, after completion of construction within 6-15 months extendable by 3 months and that they would not escalate the cost of the flat and would strictly honour the Builder-Buyer-Agreement executed by the Corporate Debtor with the homebuyers.

3) However, the NCLAT failed to take into consideration the Minutes of the Meeting of 23-10-2021, the Revised Status Report dated 03-11-2021 submitted by the IRP and the Affidavit dated 27-12-2021 submitted by the Promoter of the Corporate Debtor, in which most of the issues stood resolved.

Thus, based on the aforesaid observations and the undertaking given by the Promoter of the Corporate Debtor, the Apex Court observed that it would be in the interest of the homebuyers if the Appellant / Corporate Debtor is allowed to complete the Housing Project. Hence, the Supreme Court (i) set aside the Impugned Order of the NCLAT dated 22-11-2021, (ii) held that the Affidavit dated 27-12-2021 submitted by the Promoter of the Corporate Debtor would be treated as an undertaking given to the Supreme Court, (iii) further directed the Appellant / Promoter of Corporate Debtor to complete the Project in accordance with the deliberations that took place on 23-10-2021 and as per the Affidavit-cum-Undertaking dated 27-12-2021, (iv) the Modification Application stood allowed before NCLAT, (v) directed the IRP to submit quarterly reports to the NCLAT regarding progress of the Housing Project and to file Status Report before NCLAT on 22-08-2022.