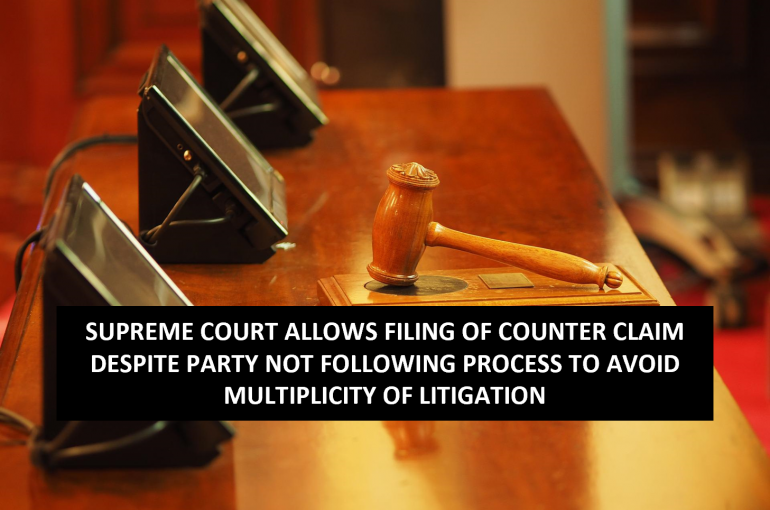 In a recent Judgment passed the Division Bench of Justice M.R. Shah and Justice Sanjiv Khanna in a matter titled as National Highway Authority of India Ltd vs Transstroy (India) Ltd. (Civil Appeal No. 6732 of 2021) decided on 11-07-2022, the Supreme Court allowed the Appellant to file a counter claim in order to avoid multiplicity of proceedings.

In the present case, National Highway Authority of India Ltd (NHAI) and Transstroy (India) Ltd. (TIL) entered into an EPC Contract for improvement and augmentation of certain sections of the National Highway. According to NHAI, the Contractor-TIL was in continuous breach of obligations under the Contract for which NHAI had issued Curation Notices. However, despite service of such Notices, the Contractor-TIL failed to cure the defects, compelling NHAI to issue a Notice of Termination of the Contract on 12-04-2016 under Clause 23.1.2 of the EPC Contract.

Upon termination, Contractor-TIL sent a Letter to refer the disputes for amicable settlement under Clause 26.2 of the Contract. The Contract provided for a two-way step for amicable dispute resolution, one, by way of conciliation and in the event that such a step did not bear results, arbitration. Accordingly, an Arbitral Tribunal was appointed for deciding the disputes between the Parties.

The Contractor-TIL filed its Statement of Claim and NHAI filed its Statement of Defense reserving its rights to claim damages and file a counter claim subsequently. NHAI also wrote to the Arbitral Tribunal after filing the Statement of Defense seeking extension of time for filing counter claim. The Arbitral Tribunal however rejected the said Letter and stated that NHAI had not moved any application under Section 23 (2A) of the Arbitration and Conciliation Act 1996 for filing its counter claim. Further, the Arbitral Tribunal was of the opinion that there was a mechanism agreed between the Parties for dispute resolution that made it mandatory that NHAI should first follow the procedure as laid down under Clause 26.1 and 26.2 of EPC i.e. the Dispute Resolution Clause, after which it could file its counter claim. For the ease and convenience of the reader, we have reproduced Section 23 (2A) of the Arbitration and Conciliation Act 1996 below:

(1) Within the period of time agreed upon by the parties or determined by the arbitral tribunal, the claimant shall state the facts supporting his claim, the points at issue and the relief or remedy sought, and the respondent shall state his defence in respect of these particulars, unless the parties have otherwise agreed as to the required elements of those statements.

(2) The parties may submit with their statements all documents they consider to be relevant or may add a reference to the documents or other evidence they will submit.

(2A) The respondent, in support of his case, may also submit a counterclaim or plead a set-off, which shall be adjudicated upon by the arbitral tribunal, if such counterclaim or set-off falls within the scope of the arbitration agreement.

(3) Unless otherwise agreed by the parties, either party may amend or supplement his claim or defence during the course of the arbitral proceedings, unless the arbitral tribunal considers it inappropriate to allow the amendment or supplement having regard to the delay in making it.

(4) The statement of claim and defence under this section shall be completed within a period of six months from the date the arbitrator or all the arbitrators, as the case may be, received notice, in writing of their appointment.

The Senior Advocate appearing for NHAI argued that the counter claim of NHAI should have been allowed as the counter claim was based on common / overlapping cause of action. She further submitted that the arbitration invoked by the Contractor arose out of a Termination Notice, which was challenged by the Contractor. Since the counter claim also arose out of the said Termination Notice there was no purpose in seeking to hair split the dispute between the Parties which would eventually lead to multiplicity of proceedings and unnecessary costs for deciding the same dispute. She further argued that there was no question of bypassing the procedure laid down in Clause 26 of EPC, as the said Clause does not state that the process has to be invoked separately or repetitively in an overlapping cause of action.

She further argued that the Arbitral Tribunal and the High Court have lost the very object and purpose of Section 23 (2A) of the Arbitration Act which is meant to provide convenience to the Parties in being able to file their claim or counter claim.

To this the Senior Advocate appearing for the Contractor-TIL argued that Clause 26 of EPC Contract mandatorily required the Parties to first attempt to amicably settle the disputes (identified and crystallised prior to the reference) as a pre-condition to invocation of arbitration. He further argued that the terms set out in Clauses 26.1.1 and 26.2 defined ‘Disputes’ to be strictly construed to mean those disputes identified by any party. Such an identification was not done by NHAI before filing its counter claim. He further argued that NHAI by merely reserving its right to file for damages and other reliefs if allowed after the Contract was terminated would not mean that it can bypass the two-step process prior to invocation of the arbitration process. He elaborated by saying there has to be a ‘Notification of Disputes’ and after such notification, resolution by amicable settlement in accordance with conciliation, failing which, the Parties can go for arbitration. The Ld. Senior Advocate relied on few Supreme Court judgments in which the Court had held that if Parties agree to any special mode for resolution of disputes, they are bound to comply with the mode prescribed under the agreement. Therefore, they cannot jump to the second step, without complying with the first step.

The Supreme Court after examining Clause 26 of EPC Contract was of the opinion that the counter claim claimed reliefs that were a result of the Termination Notice. Hence, as far as the said Termination Notice was concerned, the dispute upon termination would include claims and counter claims. The Apex Court further held that the Notice invoking arbitration also clearly states that the arbitration covers any dispute that has arisen between the Parties. Therefore, the Contractor-TIL cannot now contend that the counter claim was without following the correct procedure.