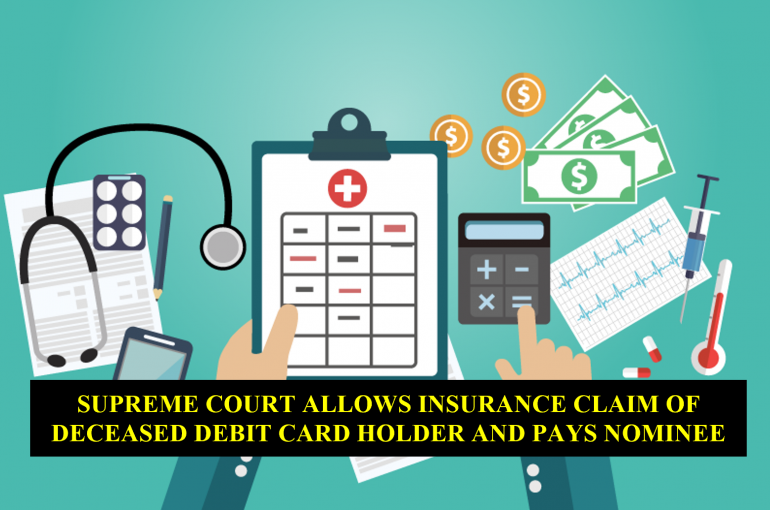 Many Debit and credit card holders are not aware that their debit and credit cards issued by banks come with a complimentary personal accident insurance cover. The Hon’ble Supreme Court of India recently dealt with such personal accident insurance cover and the terms and conditions attached with it, while deciding an appeal against the judgement of National Consumer Disputes Redressal Commission (NCDRC), in the case of Anju Kalsi v. HDFC Ergo General Insurance Company Limited and Another.

A two-Judge Bench of the Supreme Court, comprising of Justice Dr DY Chandrachud and Justice Surya Kant, in the case of Anju Kalsi v. HDFC Ergo General Insurance Company Limited and Another, decided on 21.02.2022 that while issuing a debit or credit card, the bank must put the consumer on notice about all the terms and conditions of the personal insurance cover, complimentary with the card.

The Appellant made a consumer complaint before the District Forum against this repudiation and the complaint was allowed on 16.07.2014 for the amount of Rs 5 lakhs together with interest at 9% per annum from 01.02.2014 and compensation and costs quantified at Rs 20,000/-. This Order of the District Forum was challenged by the Appellant as well as the by the Insurance Company. The State Commission dismissed the Appellant’s case for enhancement of compensation granted by the District Forum. However, the appeal by the first Respondent, the insurance company was allowed, stating the deceased had failed to use the debit card with a non-ATM transaction during the period of three months immediately prior to the date of the accident, which is an essential condition to avail the insurance amount.

This Order of the State Commission was affirmed by the National Commission (NCDRC) on 24.03.2017. Thus, aggrieved by this judgement the Appellant made an appeal against it before the Hon’ble Supreme Court.

The Supreme Court observed that the insurance cover was provided by the first respondent to the second respondent, but the debit card holders of the bank were beneficiaries of the cover of insurance. The Court discussed Special Conditions 5 and 9 of the insurance policy which was issued by the first respondent to the second respondent. The Special Condition 5 read that non-ATM swipe (transaction) is mandatory i.e., on or before 6 months from the date of loss for claims eligibility. As per Special Condition 9 “For accidental death coverage the following conditions should be fulfilled – under platinum card only:

Step I: Base cover – Rs 50,000 per card by doing one POS transaction in the last three months.

Step II: Accelerated cover up to Rs 5,00,000/- (Total of up to Rs 10,00,000/-) for over Rs 1 spent on purchase through the Platinum Debit Card, sum assured increases by five times the spent amount (subject to minimum spends of Rs 20,000) in the last 12 months as per the latest bank statement of the customer.”

The Supreme Court observed that the major issue which is to be decided is whether the Special Conditions of the policy which was issued by the Bank to the Insurer were drawn to the notice of the account holder. The counsel for the Appellant contended that except for the covering letter of the Debit card which indicated about the complimentary insurance cover, the deceased was not furnished with any conditions or documents relating to the insurance cover.

The Court further added that, “unless the respondents were able to establish on a cogent basis that the special conditions of the policy which was issued by the first respondent to the second respondent were drawn to the notice of the account holder for whose benefit the insurance cover extended, the claim ought not to have been rejected.”

Therefore, the Supreme Court set aside the order of the NCDRC dated 24.03.2017, while restoring the order of the District Forum and stated that the Appellant would be entitled to compensation in the amount of Rs 5 lakhs together with interest from 01.02.2014 at 9% per annum. The Court also found the Appellant to be entitled to compensation and costs quantified at Rs 20,000/- as awarded by the District Forum.

By and large insurance companies are very quick in repudiating insurance claims once the same becomes due and payable. At the time of selling the insurance all false promises are made and the consumer is generally misled to believe that his claim would be accepted. However, the stark reality is that insurance companies do not want to pay and always look for some loophole to bail them out. The Supreme Court has once again come to the rescue of the victimized policy holder or in this case the nominee.