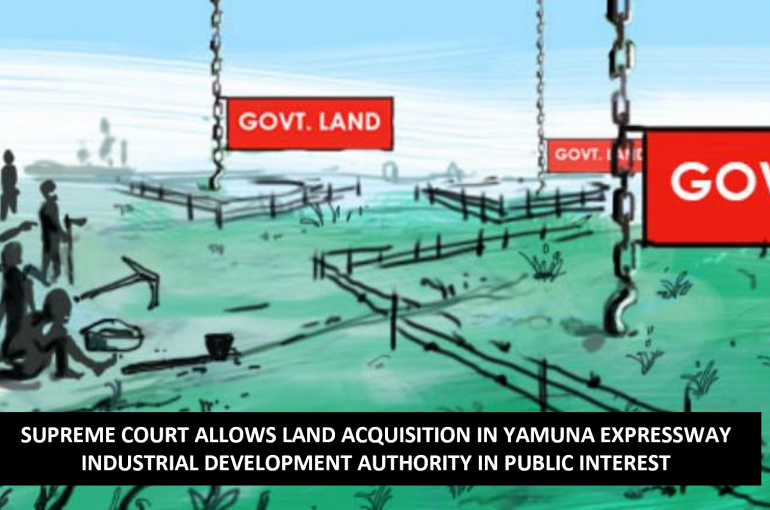 A Two Judge Bench of the Supreme Court comprising of Justice L. Nageswara Rao and Justice BR Gavai passed a Judgment dated 19-05-2022 in Yamuna Expressway Industrial Development Authority etc vs Shakuntla Education and Welfare Society & Ors. etc Civil Appeal Nos. 4178-4197 of 2022 and other connected matters, and allowed land acquisition by Yamuna Expressway Industrial Development Authority as it was in the larger interest of farmers and in case of conflict between public interest and private interest, the former shall prevail.

In this case, the Government of Uttar Pradesh had acquired a vast area of land for public purposes, namely, for the benefit of Yamuna Expressway Industrial Development Authority (YEIDA). Thereafter, YEIDA invited applications for allotment of plots of land in the area developed by it. The Respondent No. 1, Shakuntla Education and Welfare Society and various other applicants applied for such allotment. They were allotted plots admeasuring different sizes. The Respondent No. 1 was informed by Letter dated 14-09-2009 by YEIDA that 50 acres of land has been allotted to them and thereafter, a Letter of Allotment dated 10-12-2009 was issued to Respondent No. 1 allotting Plot No.2 in Sector 7­A, having an area of 50 acres, i.e., equivalent to 2,02,350 sq. meter (Land) on lease. The Respondent No. 1 had to pay Rs. 1055 per sq. meter as premium for the said Land out of which they had already deposited 10% and balance to be deposited in monthly instalments. Additionally, the Respondent No. 1 has to pay 2.5% of total premium to YEIDA as annual lease rent. The said Land was in possession of YEIDA and after the acquisition proceedings were complete, possession would be handed over to Respondent No. 1. Meanwhile, a Lease Deed was executed on 22-01-2010 in favour of the Respondent No. 1 for a period of 90 years. Thereafter, YEIDA introduced a Policy, whereby the Respondent No. 1 was given an option to deposit the entire premium amount at a rebated price in lump-sum instead of paying it in instalments. Accordingly, the Respondent No. 1 paid the agreed lump-sum amount to YEIDA.

The State of Uttar Pradesh further made large-scale land acquisitions for the benefit of New Okhla Industrial Development Authority (NOIDA) and Greater NOIDA, which came to be challenged before Allahabad High Court by several farmers, on the ground that there was no urgency to acquire the land for public purpose in terms of Section 17 of Land Acquisition Act 1894 (Act) (Special powers in cases of urgency). The Petitioners were aggrieved as their right to objection under Section 5A of the Act was taken away. The High Court passed a Judgment dated 21-10-2011 in respect of NOIDA land acquisition case and observed that the urgency clause ought not have to been invoked and the famers were unlawfully denied their right to objection against land acquisition. However, as the land was already developed and third-party rights had accrued in it, hence, the High Court directed the Petitioners not to disturb the acquisition and in order to balance the equities, directed the Respondent Authorities to pay additional compensation of 64.7% plus some other benefits to the farmers.

As farmers whose land was acquired by NOIDA were being paid additional compensation, there was unrest amongst farmers whose land was acquired by YEIDA. Eventually, the Government agreed to pay them additional compensation of 64.7% on the condition that they withdraw pending litigations and to refrain from causing hindrance to YEIDA development work, vide Government Order dated 29-08-2014 (G.O.) and Resolution of YEIDA Board dated 15-09-2014 (Resolution). The said G.O. and Resolution also demanded for additional premium from allottees including Respondent No. 1 at the rate of Rs. 600 per sq.m for the land allotted and leased out to them.

Aggrieved by the said G.O. and Resolution, the Respondent No. 1 and other affected allottees filed Writ Petitions before the Allahabad High Court in Writ Petition No.28968 of 2018 and other connected matters. The High Court vide Judgment dated 28-05-2020 allowed the said Writ Petitions on the ground that the High Court Judgment in case of NOIDA land acquisition was not a judgment in rem and could not have been applied for YEIDA land acquisition and that the said G.O. and Resolution were violative of provisions of the Act.

Aggrieved by the High Court Judgment dated 28-05-2020, YEIDA, State of Uttar Pradesh and farmers whose land was acquired filed an Appeal before the Supreme Court. The Apex Court passed a Judgment dated 19-05-2022 and made the following observations in this case:

1) That the doctrine of promissory estoppel applies to Government as well and it is an equitable doctrine. However, it has to be shown that fulfilling the promise or representation would raise an equity in favor of the person to whom such promise was made, only then such promise would be enforced against the Government or public authority. The Courts are bound to consider all aspects including the interests of the public at large.

2) That in this case the farmers whose land was acquired by YEIDA felt aggrieved as they were paid less compensation in comparison to that paid to farmers whose land was acquired by NOIDA, hence, they agitated and stalled the project work. As a result, the aggrieved allottees approached the State Government for redressal of the problem. In those circumstances, the Government took cognizance of the problem and eventually passed the GO and Resolution along with YEIDA in the interest of the large section of farmers and to some extent, the allottees as well. Hence, the policy decision of the State Government was held to be rational and founded on ground realities, by the Supreme Court.

4) Moreover, it was the Respondent-allottees who had approached the State Government for redressal of problem in YEIDA land acquisition case where the project was stalled due to farmer agitation. Thus, when the Government changed its policy decision and agreed to pay additional compensation to the farmers in order to ensure that there is no hindrance to land development for the benefit of the allottees, the Respondent- allottees turned around and challenged the very same decision that paved way for land / project development for their benefit.

Thus, based on the aforesaid observations, the Apex Court held that the State Government had done wide range of deliberations with all stakeholders including farmers, allottees and YEIDA before formulating the policy decision. Hence, the High Court erred in holding that the Government policy decision was arbitrary and unfair towards allottees, on the ground that it was in the interest of the larger section of farmers and also to some extent, in the interest of the allottees. It is settled law that in case of conflict between public interest and private interest, the former shall prevail. Thus, the High Court Judgment dated 28-05-2020 was set aside and the Appeals were allowed.