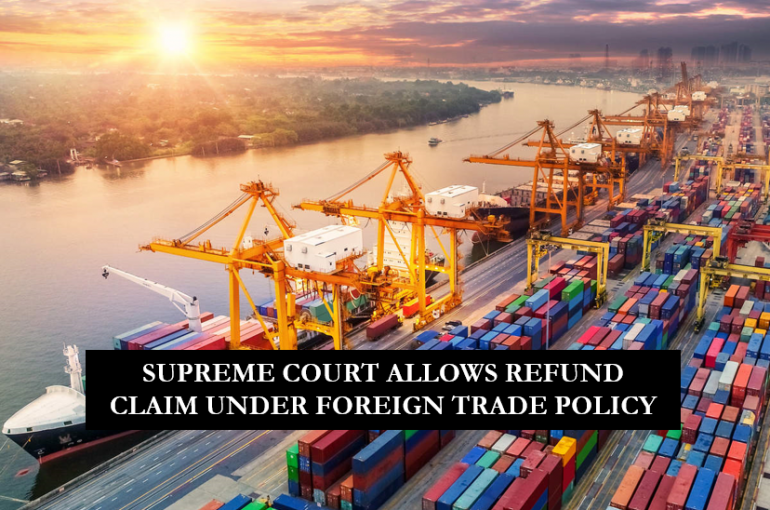 A Three Judge Bench of the #SupremeCourt comprising of Justice A.M. Khanwilkar, Justice Dinesh Maheshwari, Justice Krishna Murari, has in a recent case of Sandoz Private Limited vs Union of India and Others passed a Judgment dated 04-01-2022 and decided upon the issue of #rejection of #refund of #TerminalExciseDuty to #ExportOrientedUnit under #ForeignTradePolicy.

In this case, the Appellant, Sandoz Private Limited claimed to be a 100% Export Oriented Unit (EOU), having two factories, one in Navi Mumbai and the other in Raigad within the Domestic Tariff Area (DTA). The said EOU is engaged in manufacture of pharmaceutical products (Products) as described in Chapter 30 of Schedule to Central Excise Tariff Act, 1985 (Act).

The Foreign Trade Policy (FTP) defines EOUs and DTAs and their relevant entitlements as follows:

1) EOUs have been defined under FTP as those units undertaking to export their entire production of goods and services [except permissible sales in DTA] for manufacture of goods, including repair, re-making, reconditioning, re-engineering, rendering of services, development of software, agriculture related goods, etc.

2) Further, EOUs may purchase supplies from DTA units to use them to manufacture goods for exports.

3) Such supplies from DTA units to EOU units are considered as deemed exports under FTP.

4) In case of deemed exports, DTA supplier is eligible for relevant entitlements including refund of goods and services tax (GST), Terminal Excise Duty, etc under FTP.

5) The basic objective behind introducing the EOU Scheme under FTP is to promote exports, enhance foreign exchange earnings, attract investment for export production and employment generation.

In this case, the Appellant-EOU procured certain supplies from its DTA Unit for the purpose of manufacture of Products and paid Terminal Excise Duty (TED) for the same. Thereafter, the Appellant applied for refund of TED on 20-04-2012 in respect of excisable goods procured from its DTA Unit (Refund Application). However, the following year, DGFT issued a Circular dated 15-03-2013 (Impugned Circular) to clarify that Office of DGFT / Development Commissioner (EOU) should not provide any refund of TED, as supplies made by DTA units to EOUs are ab initio exempted from payment of excise duty. In general, refund of TED can be claimed only in a case where excise duty has been paid on manufacture / export of goods. But as excise duty is exempted for supplies made by DTA units to EOUs, thus, Appellant’s claim for refund of TED was rejected by Development Commissioner, vide Letter dated 01-04-2013 (Rejection Letter).

Aggrieved, the Appellant filed a Writ Petition before the Bombay High Court, thereby challenging the legality and validity of the Impugned Circular issued by DGFT and the Rejection Letter issued by Development Commissioner. The High Court vide Order dated 23-09-2014 directed the competent Authority to consider the refund claim of the Appellant afresh, after giving them an opportunity of fair hearing. Accordingly, the Development Commissioner accorded opportunity for personal hearing to the Appellant and thereafter, rejected its refund claim vide Order dated 06-01-2015 (Rejection Order).

Aggrieved, the Appellant filed another Writ Petition before the Bombay High Court in 2015, thereby challenging the Impugned Circular issued by DGFT and the Rejection Order of the Development Commissioner. The High Court dismissed the Writ Petition vide Impugned Judgment dated 01-08-2016.

Aggrieved, the Appellant filed an Appeal before the Supreme Court. The Apex Court passed Judgment dated 04-01-2022 and made the following observations:

(1) That FTP allows certain entitlements to DTA Units and EOUs. As per Chapter 6 and 8 of the FTP in 2012, in case of deemed exports, a DTA Unit is (a) exempt from payment of Central Excise Duty in respect of goods manufactured in DTA Unit and (b) is entitled to claim for refund of Terminal Excise Duty (TED), provided that the EOU does not avail CENVAT credit / rebate on such goods.

(2) Further, as per FTP and the Impugned Circular, in case of deemed exports, the EOU can purchase / import supplies from DTA Unit without any payment of duty.

(3) That in certain cases, EOUs are also entitled to the exemptions that DTA units are entitled to, such as refund of TED, etc, upon obtaining disclaimer from DTA supplier and upon compliance of other formalities stipulated in the FTP and the Impugned Circular.

In this case, the Supreme Court directed the Authority responsible to implement the FTP under the Foreign Trade (Development and Regulation) Act, 1992 i.e. Office of DGFT / Development Commissioner, etc, to deal with refund claim of the Appellant, subject to Appellant’s compliance of the aforesaid formalities.