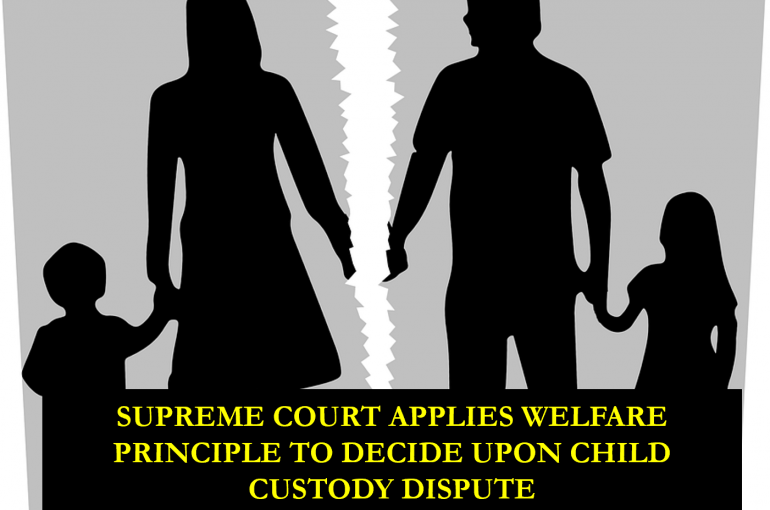 Recently, a Two Judge Bench of the Supreme Court comprising of J. Ajay Rastogi and J. Abahy S. Oka passed a Judgment dated 12-01-2022 in the matter of Vasudha Sethi & Ors. V. Kiran V. Bhaskar & Anr and made observations in a dispute between Parents with respect to the custody of their Minor Child.

In this case, the Appellant, Mrs. Vasudha Sethi and the Respondent, Mr. Kiran Bhaskar were married in New York, USA on 13-01-2011 and a son was born out of this wedlock in USA on 21-01-2016. The Respondent has Permanent Residency of USA till 16-08-2031 and the Minor Son, Aaditya Kiran, has US Citizenship. Unfortunately, the Minor Child was diagnosed with Hydronephrosis (i.e. Kidney issues), which required surgery. But the Parents could not afford medical surgery in USA and hence, both Parties mutually agreed to get the Surgery done in India at Max Hospital, Saket. As the Minor Child is a US Citizen, thus, the Parents entered into a Mutual Consent Document on 04-02-2019 that recorded the fact that the Appellant-Mother would be travelling to India with the Minor Child for a period of 05-02-2019 to 26-09-2019 and in case any change in the plan has to be made, it has to be mutually agreed by both Parents.

Accordingly, the Appellant and the Minor Son left for India on 05-02-2019 and the Child underwent Surgery on 14-03-2019 at Max Hospital, Saket. At the time of Surgery, the Respondent-Father visited the Hospital and later, flew back to USA for work. One, Doctor Anurag Krishna Director, Paediatrics and Paediatric Surgery of Max Hospital, Saket, New Delhi issued a Certificate dated 17-09-2019, which recorded that he had examined the Child on 12-07-2019 when he found that the Child was doing well and that he has to be reviewed 6 to 7 months post-Surgery along with a fresh ultrasound and renal scan. As a result, the Appellant and the Minor Child had to overstay in India.

Aggrieved, the Respondent filed a Petition on 30-01-2020 before the Circuit Court of Benton County, Arkansas, USA, seeking primary care, control, and custody of the Minor Child, as the Appellant has violated the International Travel Consent by detaining the Minor Child in her illegal custody in India beyond 26-09-2019.

The US Court passed an Interim Order dated 03-02-2020 granting the said relief and directed the Appellant-Mother to return the Minor Child to the Respondent.

Thereafter, the Respondent filed a Writ of Habeas Corpus Petition before the Punjab and Haryana High Court seeking custody of his Minor Son. The High Court allowed the Writ Petition vide Judgment and Order dated 31-08-2021 on the ground that the Parties had not mutually consented to the change in the travel plan. Hence, the High Court directed the Appellant-Mother to return to USA with his Minor Son, failing which she must handover the custody and Passport of the Minor Child to the Respondent-Father.

Aggrieved by the High Court Judgment and Order dated 31-08-2021, the Appellant-Mother filed an Appeal before the Supreme Court.

The Apex Court passed a Judgment dated 12-01-2022 and made the following observations in this case:

1) That Section 13 of the Hindu Minority and Guardianship Act 1956 (Act) provides the principle that “welfare of a minor child” is the predominant consideration in a custody dispute.

2) That as per Section 6 (a) of the Act, the custody of a minor boy / an unmarried girl (i) who is less than 5 years in age, shall ordinarily be with the mother and (ii) above that age, with the father.

4) Hence, when a Court decides that the best interest of a minor child would be if he/she remains in the custody of one of the parents, then the rights of the other parent would naturally be affected. However, the Court may grant visitation rights to the other parent.

5) That the Act is enacted to protect the rights and interests of the children and not the parents. Therefore, the consideration of the well-being and welfare of the child must get precedence over the individual or personal rights of the parents.

6) In this case, the Supreme Court noted the fact that the Minor Son has spent more than 3 years in USA and 2 and ½ years in India. Therefore, it cannot be said that there is a complete integration of the child with the social, physical, psychological, cultural and academic environment of either USA or India.

7) But the High Court rightly held that it is in the best interest of the Minor Child to return to USA, as the Appellant could not produce any medical document or evidence to show that the Minor Son required further medical examination in India and she also could not establish that the Respondent-Father had any temperamental issues because of which it is not safe for the Minor to return to USA with the Respondent-Father. Thus, the High Court Judgment has been upheld in that respect.

8) But the High Court, while dealing with a Writ Petition, cannot direct a parent to leave India and to go abroad with the child, as otherwise, it would affect the right to privacy of that parent.

Thus, in this case, the Apex Court held that the Appellant-Wife cannot be forced to fly to US and/or stay with the Respondent-Husband. The Appellant may choose to travel to USA to contest the cases and child custody matters filed by the Respondent in US and the latter would bear suitable expenses for her travel and stay in USA and for the medical treatment of the Minor Son in USA. Further, the Supreme Court allowed temporary custody to the Respondent-Father in USA from 10AM-5PM on every Sunday, until further orders of the US Court. In the event, the Appellant-Mother chooses not to travel to USA, then she must hand over the custody of the Minor Son to the Respondent-Father and in such case, the Appellant-Mother would have a right to (video) call with the Minor Son at an agreed time. The Apex Court further held that the Parties may also adopt a joint parenting plan, if possible. As a result, the Appeal was disposed of.

Time and again, Courts in India have always considered the welfare the child as the most important factor in determining parenting rights. As already explained above, even in cases where the child is less than 5 years of age, a child can be handed over to the father if the petitioner can convince the Court that it is in the interest and welfare of the child. While Courts take an objective stand when it comes to a child’s custody, visitation, etc, parents are often subjective and only consider their emotional needs, overlooking the fact that the child’s welfare is and ought to be the primary consideration.