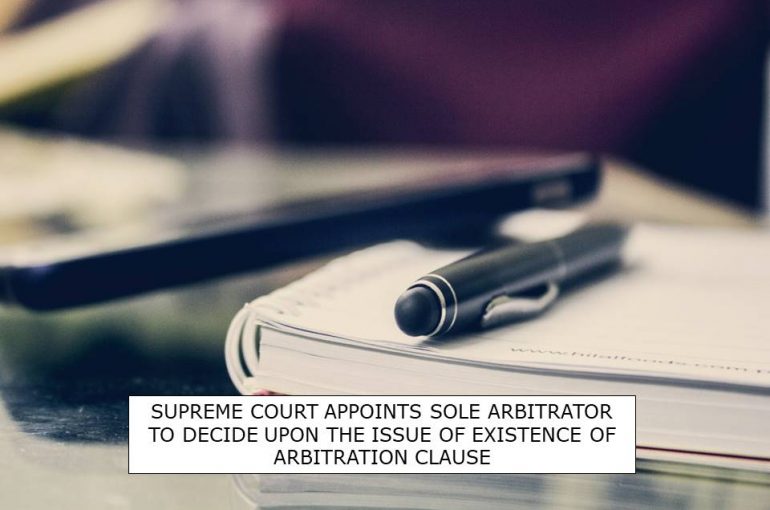 Recently, a two-Judge Bench of the Supreme Court comprising Justice B.V. Nagarathna and Justice B.R. Gavai passed a Judgment dated 23.11.2022 in M/s. Meenakshi Solar Power Pvt. Ltd. vs. M/s. Abhyudaya Green Economic Zones Pvt. Ltd. and Ors. in Civil Appeal No. 8818 of 2022 (Arising out of SLP (Civil) No. 11570 of 2021), and thereby appointed a Sole Arbitrator to decide upon the issue of existence of Arbitration Clause in the present case and further, held that the High Court erred in dismissing the Application seeking Appointment of Arbitrator by observing that the Arbitration Clause contained in the Share Purchase Agreement dated 24.09.2018 was superseded and novated by a subsequent Tripartite Agreement dated 03.04.2019 executed between the Parties.

Thereafter, a Tripartite Agreement dated 03.04.2019 was executed between the Appellant through its Affiliate i.e. Respondent No.4 with the Respondent No. 2 and 3 and the IFCI Venture Capital, thereby, recording the information about the earlier Share Purchase Agreement dated 24.09.2018 and payment of balance Rs. 50 Lakhs made thereunder.

The Appellant, as per Clause 10 of the Share Purchase Agreement, sent a Letter dated 22.06.2020 to the Respondent, for invoking Arbitration Clause thereunder for resolution of disputes. The Appellant nominated an Arbitrator and requested the Respondent Nos. 1 to 3 to nominate their arbitrators as well, so that the Arbitration Committee can be formed for adjudication purposes. However, there was no response from the Respondent’s side for the same.

Aggrieved by the High Court Order dated 12.02.2021, the Appellant approached the Supreme Court by way of the present Appeal.

As per the Respondent, as there was novation in the Share Purchase Agreement, the Arbitration Clause no longer existed. Thus, there was no scope to resolve the dispute through arbitration.

The Apex Court passed a Judgment dated 23.11.2022 and observed as follows:

In case of disputes in connection with a contract pertaining to its repudiation, frustration, breach, etc, it is only the performance of the contract that has come to an end but the contract is still in existence for certain purposes and hence, the arbitration clause also continues to operate for resolution of disputes in respect of the said purposes.

Thus, in this case, the Supreme Court held that the High Court erred in dismissing the Application seeking Appointment of Arbitrator by observing that with the execution of the Tripartite Agreement, there was novation in the Share Purchase Agreement and hence, Arbitration Clause was not effective. The said issue was further left to be decided by Ld. Sole Arbitrator, Hon. Sri Justice R. Subhash Reddy, Former Judge, Supreme Court of India, who was appointed by the Apex Court in this Judgment dated 23.11.2022 to arbitrate the disputes between the Parties in the present case.

As a result, the Apex Court allowed the Appeal and thereby, set aside the High Court Order dated 12.02.2021.