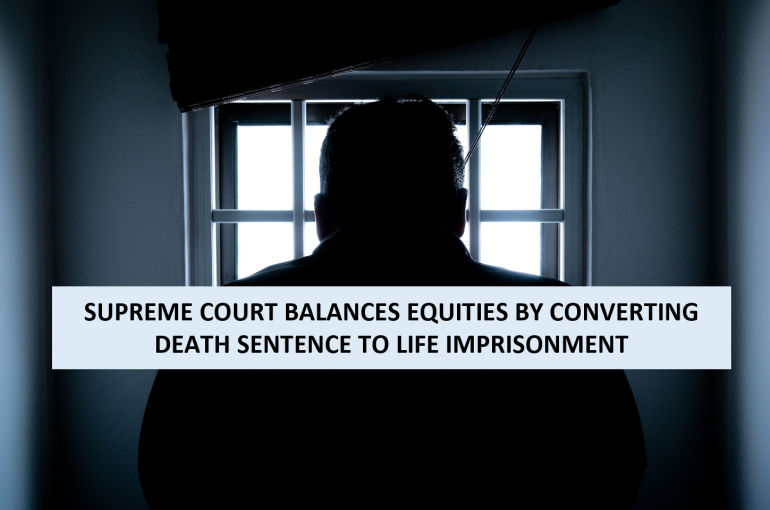 In a recent case of B.A. Umesh vs Union of India and others Criminal Appeal No. 1892 of 2022, a three Judge Bench of the Supreme Court comprising of the Chief Justice of India (CJI) Uday Umesh Lalit, Justice S. Ravindra Bhat and Justice Pamidighantam Sri Narasimha passed a Judgment dated 04-11-2022 and commuted the Accused-Appellant’s death sentence to life imprisonment on the ground that he was put in unlawful solitary confinement for about 10 years.

In this case, the Accused-Appellant, Mr B.A. Umesh was arrested for committing rape and murder of his wife on 02-03-1998 and was kept in police custody at Peenya Circle Police Station, Yeshwanthpur Sub-Division, Bengaluru City.

Thereafter, the Sessions Judge, Fast Track Court-VII, Bengaluru (Trial Court) passed a Judgment dated 26-10-2006 in Sessions Case No. 725 / 1999 and convicted the Accused for having committed the offences under Sections 302 (Punishment for murder), 376 (Punishment for rape) and 392 (Punishment for robbery) of the Indian Penal Code 1860 (IPC) and thereby, awarded punishment of death sentence, subject to confirmation of the High Court.

The Accused was then transferred to Belgaum Central Prison, where he was allegedly kept in solitary confinement for about 11 years.

A case for confirmation of death sentence was registered before the High Court of Karnataka as Criminal Reference No. 3 / 2006.

Further, the Accused filed Criminal Appeal No. 2408 / 2006 against the Trial Court’s Conviction Order. The High Court upheld the conviction and the death sentence vide Judgment dated 18-02-2009.

Aggrieved, the Accused filed Criminal Appeals Nos. 285-286 / 2011 before the Supreme Court, which were dismissed by the Supreme Court vide Order dated 01-02-2011, thereby affirming the Appellant’s conviction and death sentence.

The Accused-Appellant then filed a Writ Petition No. 53944 / 2016 (GM-Res) before the High Court of Karnataka seeking directions to commute death sentence to life imprisonment and further sought for declaration that execution of death sentence pursuant to the rejection of Mercy Petition by Office of the Hon’ble President of India is bad in law and also that the decisions to reject his Mercy Petitions by both the Hon’ble President of India and the Governor of Karnataka be declared as illegal and void and be set aside.

The High Court, vide Judgment dated 29-09-2021, dismissed the Writ Petition mainly on the grounds that there was no inordinate delay in deciding the Mercy Petitions. Additionally, the High Court did not accept the Petitioner’s plea that he was kept in solitary confinement.

Aggrieved, the Accused-Appellant filed an Appeal before the Supreme Court against the High Court Judgment dated 29-09-2021. The Apex Court made the following observations:

i) Though no time limit can be fixed for the Governor and the President, it is the duty of the executive to expedite the matter at every stage …

ii) delay exceeding two years in the execution of sentence of death should be considered sufficient to entitle the person under sentence to death to invoke Article 21 and demand the questioning of the sentence of death.

2) That in the present case, the Appellant’s Mercy Petition was rejected by the Hon’ble President of India on 12-05-2013, i.e. after about two years of filing the Mercy Petition on 08-02-2011. But during the said period of 2011-2013, the Supreme Court had granted stay of execution of death sentence on 09-03-2011 in Writ Petition No. 52 / 2011 that continued throughout the pendency of the proceedings until it was disposed off in 2014. Thus, it cannot be said that the Appellant was suffering due to any delay in execution of death sentence, due to pendency of Mercy Petitions, as his death sentence was stayed during that period.

3) Hence, based on the aforesaid observations, the Supreme Court held that it cannot be said that there was any “inordinate” delay in execution of death sentence on the part of the Authorities due to pendency of Mercy Petitions during 2011-2013.

4) Further, the Supreme Court made observations regarding commuting of death sentence on the ground of solitary confinement:

i) That the Accused was awarded death sentence by the Trial Court vide Judgment dated 26-10-2006 and the Hon’ble President of India disposed off his Mercy Petition on 12-05-2013. Thereafter, the Accused filed Writ Petition No. 53944 / 2016 (GM-Res) before the High Court of Karnataka seeking directions to commute death sentence to life imprisonment in 2016. Hence, all-in-all, the Accused was kept in solitary confinement for about 10 years, without the sanction of law.

iii) Thus, based on the aforesaid Letters, it was held that the solitary confinement indeed had shown ill effects on the well-being of the Appellant. Thus, the Appellant was held entitled to have the death sentence commuted to life imprisonment.

Thus, based on the aforesaid observations, the Apex Court partly allowed the Appeal and modified the High Court Judgment dated 29-09-2021 to the extent that the death sentence was commuted to life imprisonment with a minimum sentence of 30 years, on the ground that the solitary confinement was without the sanction of law and had shown ill effects on the health of the Appellant.

The law on life imprisonment implies that the person will be in prison till he attains natural death. However, under the Code of Criminal Procedure 1973 (CrPC) a sentence of life imprisonment can be commuted to a term of 14 years at the discretion of the Government. There are specified terms for life imprisonment in certain sections of the Indian Penal Code 1860 (IPC). These are in reference to heinous crimes and are covered specifically by the relevant section. For instance, Section 376 IPC which deals with rape, states that life imprisonment shall deem to be imprisonment till the natural death of the person. In the case discussed above, the life sentence was of 30 years as per the Apex Court.