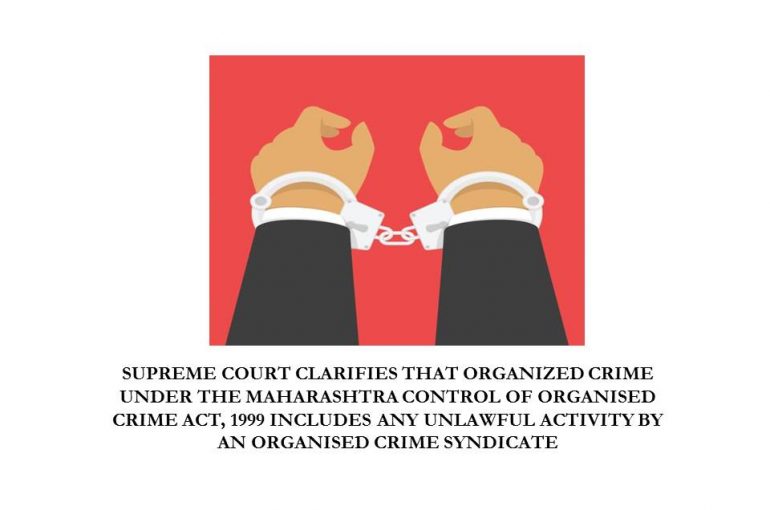 A Division Bench of the Hon’ble Supreme Court of India comprising of Justice Dinesh Maheshwari and Justice Aniruddha Bose passed a Judgment dated 20-05-2022 in the case of Abhishek versus State of Maharashtra & Ors. (Criminal Appeal No. 869 OF 2022 arising out of SLP (CRL.) No. 1157 of 2022) and held that continuous engagement with the objective of gaining advantages other than economic or pecuniary is also an “organized crime” under The Maharashtra Control Of Organised Crime Act, 1999 (MCOCA).

The Additional Commissioner of Police (Crime), Crime Branch, Nagpur City on 02.06.2020 examined the proposal submitted by the Police Inspector, Crime Branch, Nagpur City for addition of Sections 3(1)(ii), 3(2) and 3(4) of MCOCA in the said Crime No. 251 of 2020 against six accused persons, including the Appellant. The Additional Commissioner of Police vide Order dated 02.06.2020 approved the proposal submitted by the Police Inspector. Upon invocation of MCOCA, Application for pre-arrest bail filed by the Appellant on 11-05-2020 was rejected by the Sessions Judge, Nagpur. However, as the Appellant was out of reach, a proclamation was issued on 14-10-2020 under Section 82 of the Code of Criminal Procedure, 1973 (Cr.P.C.) read with Section 20(3) of MCOCA, declaring him as an ‘absconder’.

Thereafter, the Police filed the charge-sheet on 07-11-2020. Aggrieved, the Appellant filed a Writ Petition No. 667 of 2020 before the High Court of Judicature at Bombay, Nagpur Bench, Nagpur (High Court), challenging the Sanction Order dated 05-11-2020.

The High Court vide Impugned Judgment and Order dated 16-12-2021, rejected the Appellant’s challenge to the Order dated 05-11-2020 issued by the Additional Director General of Police and Commissioner of Police, Nagpur City and observed as follows:

Aggrieved and dissatisfied by the Impugned Judgment and Order dated 16-12-2021 passed by the High Court and the Sanction Order dated 05-11-2020, the Appellant approached the Hon’ble Supreme Court of India. The Apex Court after taking into consideration the facts of the case and the contentions raised by the Parties referred to the following relevant provisions of MCOCA:

Section 2(1)(d) defines “continuing unlawful activity” an activity prohibited by law for the time being in force, which is a cognizable offence punishable with imprisonment of three years or more, undertaken either singly or jointly, as a member of an organised crime syndicate or on behalf of such syndicate in respect of which more than one charge-sheets have been filed before a competent Court within the preceding period of ten years and that Court has taken cognizance of such offence;

Section 2(1)(e) defines “organised crime” as any continuing unlawful activity by an individual, singly or jointly, either as a member of an organised crime syndicate or on behalf of such syndicate, by use of violence or threat of violence or intimidation or coercion, or other unlawful means, with the objective of gaining pecuniary benefits, or gaining undue economic or other advantage for himself or any other person or promoting insurgency.

The Bench observed that the provisions of MCOCA have to be construed strictly and for the application of these Sections, an unlawful activity must fall within the ambit of “organized crime”. While referring to Section 2(1)(e), the Supreme Court observed that

The Apex Court held that the involvement of the Appellant in such crimes and unlawful activities which are aimed at gaining pecuniary advantages or of gaining supremacy and thereby, leading to other unwarranted advantages is clearly made out.

Therefore, the Apex Court rejected the contentions raised by the Appellant and upheld the Impugned Judgment and Order dated 16-12-2021 passed by the High Court and Sanction Order dated 05-11-2020.