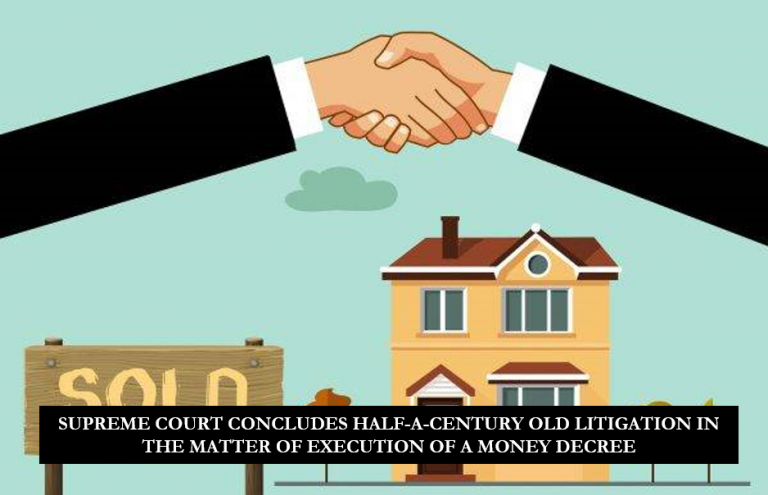 The Two Judge Bench of the #SupremeCourt has in the matter of Dipali Biswas v Nirmalendu Mukherjee passed a Judgment dated 05-10-2021 and made the following observations in a half-a-century old #litigation, which is at the stage of execution of a simple #moneydecree that started in 1971 and is still continuing its fifth round of litigation before the Apex Court.

In this case, the long pending litigation started as follows:

Aggrieved by Order of the High Court dated 28-03-2008, the Appellants filed the present Appeal before the Apex Court. The Supreme Court made the following observations in this case:

(1) That the Appellants and the Judgment Debtor have been able to run this half-a-century old litigation only because of Order 21 Rule 64 CPC. The said provision enables an executing court to order “that any property attached by it and liable to sale or such portion thereof as may seem necessary to satisfy the decree, shall be sold and that the proceeds of such sale or a sufficient portion thereof shall be paid to the party entitled under the decree to receive the same”.

(2) That the Judgment Debtor had sufficient opportunity in the earlier rounds of litigation to object to the inclusion of the entire Property for Auction, on the ground that only a part of the Property would be sufficient to satisfy the Decree, as per Order 21 Rule 64 CPC.

(4) Moreover, the sale has attained its finality after issue of Sale Certificate and only delivery of possession is left. It is not as if the appellants were not aware of the fact that the property in entirety was included in the proclamation of sale.

Hence, the Apex Court held that, now, at this delayed stage, the Judgment Debtor cannot raise this objection relating to Order 21 Rule 64 CPC, on the ground that a judgment-debtor cannot be allowed to raise objections as to the method of execution in instalments. Thus, the Apex Court dismissed the claim made on the basis of Order 21 Rule 64 CPC and thereby, dismissed the Appeal.