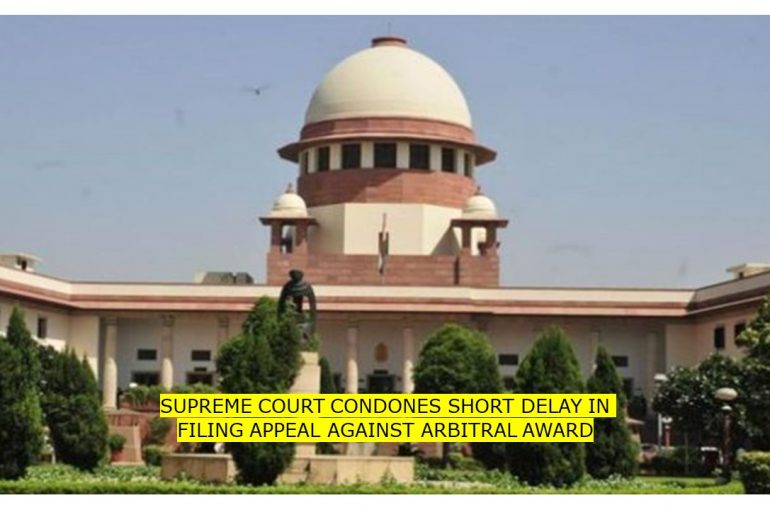 A Two-Judge Bench of the Supreme Court, comprising of Justice Ajay Rastogi and Justice Sanjiv Khanna, on 30.03.2022, held that a short and condonable delay in filing appeal against an Arbitral Award should not be dismissed without proper and full application of mind with reference to the provisions of the Limitation Act and the Arbitration and Conciliation Act, while deciding the case of Haryana Urban Development Authority v. M/s. Mehta Construction Company and Another, Special Leave Petition (Civil) NO. 6137 OF 2022).

The Respondent approached the Punjab and Haryana High Court for appointment of an arbitrator to resolve the dispute. An Arbitrator was appointed by the High Court vide an Order dated 19.10.2012. The Arbitrator by an Order dated 20.12.2013 awarded an amount of Rs.1,19,69,945/- along with interest @ 18% per annum on the delayed payment to the Respondent. Against this Award, an application was filed by the Appellant on 28.03.2014 before the Additional District Judge, Karnal, under Section 34 of the Arbitration and Conciliation Act, 1996 (the Act) along with an application for condonation of delay. The Additional District Judge, Karnal on 08.01.2018, passed an Order whereby it was held that the objections raised by the Appellant were barred by limitation and no plausible explanation was given to explain the delay. The Appellant approached the Punjab and Haryana High Court against this Order. However, the High Court dismissed the appeal vide an order dated 11.11.2019, on the ground that the Appellant failed to justify that the objections filed by them were within limitation.

As per sub-section (3) to Section 34 of the Act, an application for setting aside an award is to be made within three months from the date on which a party filing objections under sub-section (1) to Section 34 has received the arbitral award; or, if a request has been made under Section 33, from the date on which that request has been disposed of by the arbitral tribunal. However, the proviso states that the court may condone delay of a period up to thirty days in filing of the objections if it is satisfied that the applicant is prevented by sufficient cause from making an application under Section 34(1) of the Act.

The Appellant preferred an appeal before the Supreme Court against the Order of the High Court. The Apex Court observed that the in the present case, the application for setting aside of the Award dated 20.12.2013 was made on 28.03.2014 accompanied by an application for condonation of delay. The District Court, therefore, had the power to condone the eight days’ delay, which was less than thirty days, in terms of the proviso to sub-section (3) to Section 34 of the Act. In the application seeking condonation of delay filed, the Appellant explained the reasons for delay. It was stated that after receiving a copy of the Award at about 6:50 P.M. on 20.03.2014, the Appellant had engaged an empanelled advocate and the records pertaining to the arbitration case were constructed and examined. The short delay had also occurred as sanctions and approvals were required from the higher/competent authority.

The Supreme Court held that since there was a short and condonable delay, the reasons for which had been stated by the Appellant, the High Court and the Additional District Judge, Karnal were not correct in refusing to condone the delay. After observing the provisions of Section 34 of the Act, the Apex Court noted that the objections under Section 34 of the Act required consideration and in-depth examination and should not have been dismissed without proper and full application of mind with reference to the provisions of the Limitation Act and the Act.