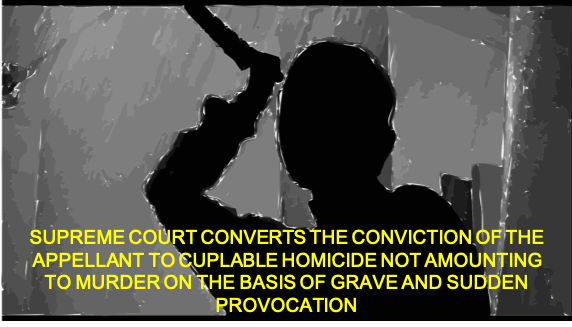 A Two Judge Bench of the Hon’ble Supreme Court of India comprising of Justice Sanjiv Khanna and Justice Bela M. Trivedi in the matter of Dauvaram Nirmalkar vs. State of Chhattisgarh Criminal Appeal No. 1124 of 2022 arising out of Special Leave Petition (Criminal) No. 2481 of 2022 passed a Judgment dated 02-08-2022 and partly allowed the Appeal and held that the death of one, Mr. Dashrath Niramkar (Deceased) was caused out of sudden and grave provocation by the Appellant and hence, converted the conviction of the Appellant from ‘murder’ to ‘culpable homicide not amounting to murder’ under the Indian Penal Code 1860.

The Trial Court in Chhattisgarh found the Appellant, Dauvaram Nirmalkar guilty of committing murder of his brother, Dashrath Nirmalkar under Section 302 (Punishment for Murder) of the Indian Penal Code (IPC) and was sentenced to life imprisonment and was directed to pay fine Rs. 1,000/- and in case of default, to undergo simple imprisonment for a period of six months. The Deceased received multiple fractures to his skull bone, as a result of which he slipped into coma due to shock. Dr. Nohar Prasad Jangde (PW-12), a Senior Medical Officer submitted that the death of the Deceased was caused due to multiple fractures of his skull bone. The High Court of Chhattisgarh upheld the Trial Court Order (details of the Trial Court and High Court Orders are not specified in the Supreme Court Judgment). Thereafter the Accused-Appellant filed a Special Leave Petition before the Supreme Court where he pleaded that the death of the Deceased was caused out of sudden and grave provocation.

The Apex Court upheld the Trial Court and the High Court’s observations on the question of involvement of the Appellant in the death of the Deceased. Even though all the Public Witnesses turned hostile, there is ample evidence and material to show the Appellant’s involvement in the crime. On 26.09.2011, the Appellant himself went to the Police Station and confessed the crime. Although in accordance with Section 25 (Confession to police officer not to be proved) of the Indian Evidence Act, 1872, the confession made by the Appellant is not admissible.  It was held in Khatri Hemraj Amulakh vs. State of Gujarat (1972) 3 SCC 671 that “Thus, no part of a First Information Report lodged by an accused with the police as an implicatory statement can be admitted into evidence. However, the statement can be admitted to identify the accused as the maker of the report. Further, that part of the information in the statement, which is distinctly related to the ‘fact’ discovered in consequence of such information, can also be admitted into evidence under Section 27 of the Evidence Act, provided that the discovery of the fact must be in relation to a material object”.

16. Applying the provocation exception, we would convert the conviction of the appellant from Section 302 to Part I of Section 304 of the IPC.

Thus, the Supreme Court held that the death of the Deceased was caused by the Appellant out of sudden and grave provocation and due to loss of self-control. Hence, the Apex Court partly allowed the Appeal and modified the sentence of imprisonment to the period already undergone i.e. 10 years by the Appellant and imposed fine of Rs. 1000/-.