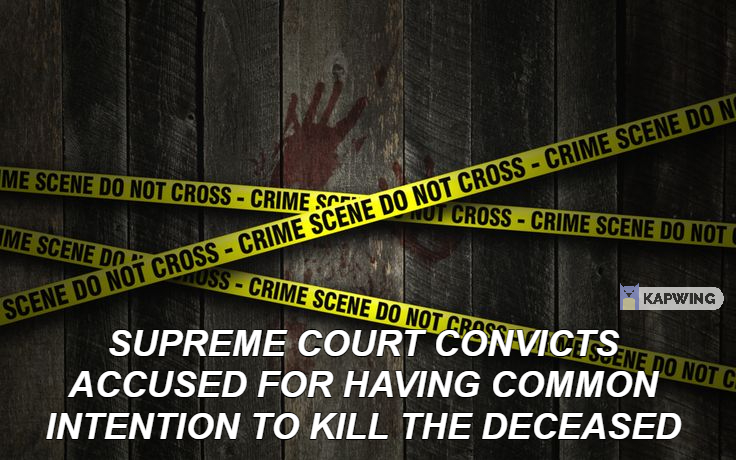 In a recent Criminal Appeal, the Supreme Court in – ‘State of Madhya Pradesh vs Ramji Lal Sharma’ Criminal Appeal No 293 of 2022 vide Judgment dated 09.03.2022 reversed the Madhya Pradesh High Court Judgment dated 13.12.2018 and held that it is immaterial whether the accused used the weapon or caused injury, if the common intention to kill the deceased is established.

Thereafter, an F.I.R was registered against all Accused under Sections 302 of the Indian Penal Code (IPC) (Punishment for murder), 307 IPC (Attempt to murder), 34 IPC (Acts done by several persons in furtherance of common intention) and Section 3(2)(v) of the Scheduled Caste and Scheduled Tribe (Prevention of Atrocities) Act 1989 (Punishments for offences of atrocities).

After due investigation, a Charge Sheet was filed on 09.07.2019 before the District Judge, Rajsamand, Rajasthan, against all the Accused for charges under Sections 302 IPC (Punishment for murder), 201 IPC (Causing disappearance of evidence of offence, or giving false information to screen offender) and 34 IPC (Acts done by several persons in furtherance of common intention) and Section 3(2)(v) of the Scheduled Caste and Scheduled Tribe (Prevention of Atrocities) Act 1989 (Punishments for offences of atrocities).

During the Trial before the Special Judge, Bhind in Special Case No.74/2002 (Sessions Court), the Prosecution examined all the witnesses. After appreciating all the oral and documentary evidences, the Sessions Court vide Order dated 24.02.2006 held that all the Accused shared common intention to kill the Deceased and sentenced them to undergo life imprisonment with a fine of Rs.5000/- each.

Aggrieved by the Order dated 24.02.2006 of the Sessions Court, the Accused No. 1 and 3 preferred an Appeal in Ramjilal Sharma and others Criminal Appeal No. 339 of 2006 before the High Court of Madhya Pradesh at Gwalior. The High Court vide Judgment dated 14-12-2018 allowed the aforesaid Appeal preferred by Accused No. 1 and 3 herein and observed that there are contradictions in ocular and medical evidenceand hence, gave them the benefit of doubt .

Feeling dissatisfied and aggrieved by the Impugned Judgment dated 14-12-2018 passed by the High Court wherein the Accused were acquitted, the State preferred an Appeal before the Hon’ble Supreme Court.

The Apex Court passed a Judgment dated 09.03.2022 and observed that once it has been established and proved by the Prosecution that all the Accused came at the place of incident with a common intention to kill the Deceased and shared the common intention, in that case it would be immaterial whether or not the Accused had used any weapon or not, and/or any of them has caused any injury to the Deceased or not.

Thus, the Apex Court set aside the Impugned Judgment dated 14-12-2018passed by the High Court of Madhya Pradesh at Gwalior in Criminal Appeal No. 339 of 2006 and thereby, restored the Sessions Court Order dated 24.02.2006 and the sentence imposed thereof.