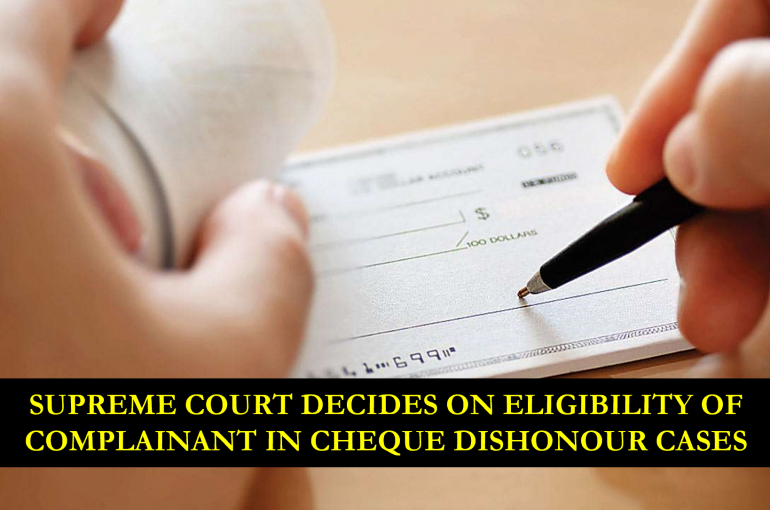 A Three Judge Bench of the Supreme Court comprising of Chief Justice of India N.V. Ramana, J. AS Bopanna, J. Hima Kohli passed a Judgment dated 22-02-2022 in M/s TRL Krosaki Refractories Ltd. Vs M/s SMS Asia Private Limited & Anr and decided upon the dispute regarding competence of a person prosecuting a complaint under Sections 138 and 142 of the Negotiable Instruments Act 1881.

Aggrieved, the Appellant filed a Complaint under Sections 138 and 142 of the Negotiable Instruments Act 1881 (Act) against the Respondent before the Hon’ble Sub-Divisional Judicial Magistrate, Jharsuguda (SDJM) in I.C.C. Case No. 422 of 2015. The Complaint was registered after taking the evidence of Complainant Company through Mr. Subhasis Kumar Das, General Manager (Accounting). On being satisfied that there is sufficient material in the Complaint filed against the Respondent-Accused, SDJM took cognizance of the Complaint and directed summons to the Respondent-Accused, vide Order dated 05-11-2015.

Aggrieved by SDJM Order dated 05-11-2015, the Respondent-Accused filed a Petition under Section 482 of the Code of Criminal Procedure 1908 (CrPC) before the High Court of Odisha in CRLMC No.1210 of 2017 on the grounds that (1) the Complaint was filed by an incompetent person, as the General Manager (Accounting) did not have any knowledge about the alleged transaction and he did not witness the same, also (2) the requisite averments were not made in the Complaint and (3) despite such shortcomings, SDJM took cognizance of the Complaint and issued summons. The Respondent-Accused thus sought for quashing of the SDJM Order dated 05-11-2015.

The High Court observed that the Complaint / Affidavit does not mention (i) when and in what manner the Company authorised its General Manager (Accounting) to represent the Company and to file the Complaint, as there is not board resolution or any authorisation letter, etc issued by Managing Director of the Company in favor of the Manager and (ii) whether the Manager had any knowledge about the transaction, etc. Thus, the High Court vide Order dated 14-12-2017, set aside SDJM Order dated 05-11-2015.

Aggrieved by the High Court Order dated 14-12-2017, the Appellant (original Complainant) filed an Appeal before the Supreme Court. The Apex Court passed a Judgment dated 22-02-2022 and made the following observations in this case:

1) That Section 142 (1) (a) of the Act provides that no court shall take cognizance of any offence punishable under section 138 except upon a complaint, in writing, made by the payee or, as the case may be, the holder in due course of the cheque. Hence, the only eligibility criteria prescribed by Section 142 of the Act is that the complaint must be made by payee or holder of the cheque in due course. In this case, the Payee is the Appellant Company, i.e. M/s TRL Krosaki Refractories Ltd, in whose name the Cheques were issued and the Complaint has also been filed by the Payee, i.e. the Appellant Company, through Mr. Subhasis Kumar Das, General Manager (Accounting).

2) Further, (a) an Authorisation Letter dated 23-05-2015 was issued by the Managing Director of the Company in favor of Mr. Subhasis Kumar Das, General Manager (Accounting), thereby authorising him to represent the Company and institute civil and criminal proceedings against the Respondent Accused including proceedings before SDJM; (b) the Managing Director himself has been delegated powers by the Board of Directors in respect of management and operation of the Company including powers to sub-delegate work to sub-ordinate officers, vide Document dated 06-04-1998.

3) That the transaction between Appellant and Respondent Companies is based on an Agreement dated 18-07-2014, in which Mr. Subhasis Kumar Das, then General Manager (Commercial) had signed as a Witness.

4) Furthermore, it was Mr. Subhasis Kumar Das, General Manager (Accounting) who had served Notices dated 14-04-2015 on behalf of the Appellant Company to the Respondent, when the Cheques were dishonoured.

5) That the aforesaid documents establish the fact that Mr. Subhasis Kumar Das, General Manager (Accounting) had sufficient knowledge about the transaction and was witness to the same and that he has been authorised to institute Complaint on behalf of Appellant Company.

6) Hence, it is established that an authorised person being witness to the transaction and having knowledge about the same, has filed the Complaint before SDJM. Thus, the requirement of Section 142 of the Act has been satisfied.

7) Even otherwise, a sworn statement in an affidavit to the effect that the complainant company is represented by an authorised person who has knowledge about the transaction, is sufficient to file a complaint under Section 138 of the Act. Such averment and prima facie material are sufficient for the Learned Magistrate to take cognizance and issue process.

8) However, if there is any serious dispute regarding the competence of the person prosecuting the complaint on behalf of the complainant company, then the accused may dispute the position and establish the same during the course of the trial and not by filing a petition under Section 482 CrPC before the High Court seeking quashing of Magistrate’s orders.

Therefore, based on the aforesaid observations, the Supreme Court held that the High Court was not justified in entertaining the Petition filed by Respondent-Accused under Section 482 CrPC and thereby quash the SDJM Order dated 05-11-2015. As a result, the High Court Order dated 14-12-2017 was set aside and the SDJM Order dated 05-11-2015 was restored with directions to the Parties to appear before the SDJM Court on 15-03-2022 and the matter be heard expeditiously as it is a 2015 matter.

In matters pertaining to companies where cheques have bounced, any person authorised by the company in initiating a cheque bouncing case is deemed to be adequately competent to initiate the case. In this case, as the Managing Director himself had authorised the GM (Accounting) to initiate the Complaint, it was rather surprising that the High Court held a contrary view about the competence of the GM to initiate the case.