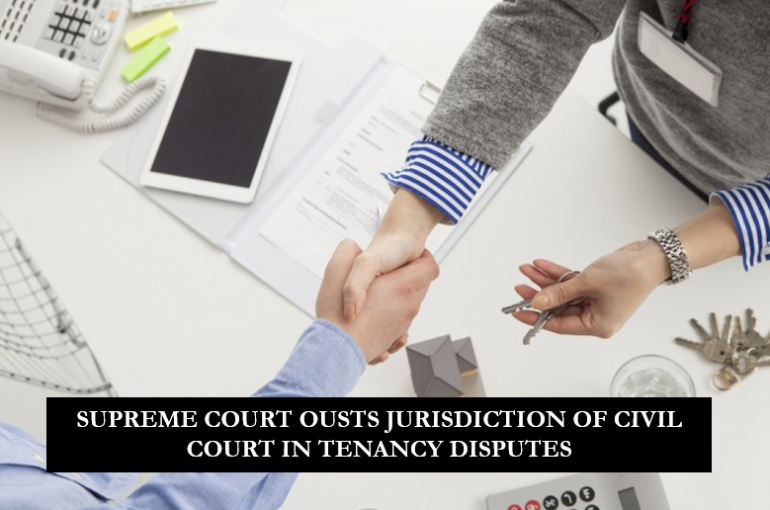 A Two Judge Bench of the Supreme Court comprising of Justice Ajay Rastogi and Justice Abhay S. Oka has passed a Judgment dated 28-01-2022 in the matter of Subhash Chander and Ors. versus M/s Bharat Petroleum Corporation Ltd. (BPCL) & Anr. and upheld the High Court Judgment dated 08-07-2019 holding that the Civil Court does not have jurisdiction to try a suit for possession of subject property, when an alternate remedy is available with Appellants to initiate proceedings for eviction of Respondents from the Suit Property under the Haryana (Control of Rent and Eviction) Act, 1973.

Prior to the expiry of the first 20 years Lease Period, the Central Government enacted the Burmah Shell (Acquisition of Undertakings) Act, 1976, whereby, it took over the rights of the Lessee and transferred the same to M/s Bharat Petroleum Corporation Ltd (BPCL) in exercise of Section 5 (2) read with Section 7 (3) of the Burmah Shell (Acquisition of Undertakings) Act, 1976. Thereafter, the Respondents renewed the Lease for another 20 years.

5. Central Government to be lessor or tenant under certain circumstances.

(2) On the expiry of the term of any lease or tenancy referred to in sub- section (1), such lease or tenancy shall, if so desired by the Central Government, be renewed on the same terms and conditions on which the lease or tenancy was held by Burmah Shell immediately before the appointed day.

As the Respondents did not vacate the premises of the Property, the Appellants filed a Civil Suit for Possession of the Property on 07-08-1998. The Respondents objected to filing of the Civil Suit on the grounds that (a) the Civil Court did not have jurisdiction to try the Suit, as the Haryana (Control of Rent and Eviction) Act, 1973 (the Haryana Act) is applicable to the Suit Property and (b) the disputes between landlord and tenant should be adjudicated as per the Haryana Act.

Aggrieved, the Appellants challenged the High Court Judgment dated 08-07-2019 before the Supreme Court. The Apex Court passed a Judgment dated 28-01-2022 and made the following observations in this case pertaining to the issue whether Civil Court jurisdiction is barred in this case and whether Eviction Petition would lie before the Rent Controller under the Haryana Act:

1) That upon enactment of the Burmah Shell (Acquisition of Undertakings) Act, 1976, the pre-existing right, title, interest of Burmah Shell Company stood transferred and vested in the Central Government, i.e. Bharat Petroleum Corporation Ltd. and by legal fiction, BPCL stepped into the shoes of Burmah Shell Company and became the Lessee of the Subject Property in the Lease Deed dated 04-06-1958.

2) That the Haryana (Control of Rent and Eviction) Act, 1973 is a complete enactment in itself determining the rights of a tenant / landlord, thereby impliedly excluding the other laws on the said subject matter.

Thus, based on the aforesaid grounds, the Supreme Court upheld the High Court Judgment dated 08-07-2019 and reiterated that the Civil Court jurisdiction is impliedly barred by the provisions of the Haryana (Control of Rent and Eviction) Act, 1973. As a result, the Appeal was dismissed.