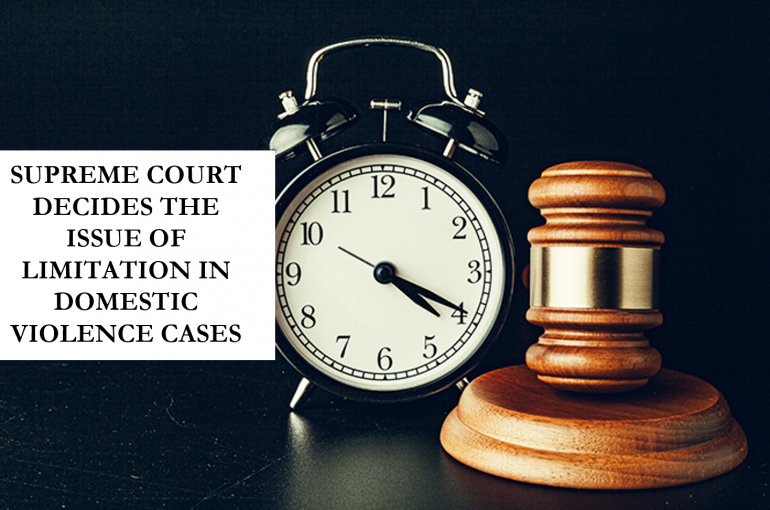 Recently, a two Judge Bench of the Supreme Court comprising of Justice Uday Umesh Lalit and Justice Pamidighantam Sri Narasimha passed a Judgment dated 13-04-2022 in a matter of Kamatchi vs Lakshmi Narayanan Criminal Appeal No. 627 of 2022 and decided upon the issue of limitation in a domestic violence case.

In this case, an Application bearing D.V.C. No.21 of 2018 was filed by the Appellant-Wife under Section 12 of the Protection of Women from Domestic Violence Act, 2005 (DV Act) (Application to Magistrate) before the Court of Judicial Magistrate, Ambattur, Chennai alleging domestic violence by the Respondent-Husband, her father-in-law and sister-in-law and thereby, sought for appropriate protection in terms of Section 17 (Right to reside in a shared household) and Section 18 (Protection orders) of the DV Act. The Protection Officer submitted his Domestic Inspection Report dated 21-08-2018 before the Magistrate and put forth various incidents of domestic violence and dowry harassment caused to the Appellant-Wife by her father-in-law, mother-in-law and sister-in-law since after her marriage with Respondent-Husband on 07-09-2007.

Soon thereafter, the Appellant’s father-in-law and sister-in-law filed Crl.O.P.No.27097 of 2018 and Respondent-Husband filed Crl.O.P. No.28924 of 2018 under Section 482 of the Code of Criminal Procedure, 1973 (CrPC) before the Madras High Court seeking quashing of the proceedings initiated under the DV Act on the ground that a matrimonial dispute is sought to have been given a criminal colour by the Appellant-Wife. The High Court passed a Judgment and Order dated 16-03-2020 and allowed the Petition filed by the Appellant’s father-in-law and sister-in-law and thereby, quashed the proceedings under DV Act against them. Provided that the Respondent-Husband would deposit a monthly sum of Rs. 5000 with the Magistrate as ad-interim maintenance, failing which the said Order would stand cancelled. The High Court also directed the Trial Court to complete the trial within six months and also directed the Respondent-Husband to appear before the Trial Court in the proceedings initiated under the DV Act.

Further, in so far as the Petition filed by the Respondent-Husband is concerned, the Madras High Court held that in view of Section 28 (Procedure), Section 31 (Penalty for breach of protection order by respondent) and Section 32 (Cognizance and proof) of the DV Act read with Rule 15 (6) of the Protection of Women from Domestic Violence Rules 2006 (Rules) (Breach of Protection Orders) and Section 468 (2) (b) of CrPC (Bar to taking cognizance after lapse of the period of limitation), the complaint ought to be filed within 1 year of the act(s) of domestic violence, failing which, such application is not maintainable. In this case, the Appellant left her matrimonial home in 2008, but she filed the Section 12 Application in 2018, i.e. 10 years later. Hence, the High Court held that on the ground of limitation, the entire complaint is a clear abuse of process of Court and hence, cannot be sustained. The said provisions are reproduced below for easy reference:

(1) Notwithstanding anything contained in the Code of Criminal Procedure, 1973 (2 of 1974), the offence under sub-section (1) of section 31 shall be cognizable and non-bailable.

(2) Upon the sole testimony of the aggrieved person, the court may conclude that an offence under sub-section (1) of section 31 has been committed by the accused.

(6) When charges are framed under section 31 or in respect of offences under section 498A of the Indian Penal Code, 1860 (45 of 1860), or any other offence not summarily triable, the Court may separate the proceedings for such offences to be tried in the manner prescribed under Code of Criminal Procedure, 1973 (2 of 1974) and proceed to summarily try the offence of the breach of Protection Order under section 31, in accordance with the provisions of Chapter XXI of the Code of Criminal Procedure, 1973 (2 of 1974).

(1) Except as otherwise provided elsewhere in this Code, no Court shall take cognizance of an offence of the category specified in sub-section (2), after the expiry of the period of limitation.

(2) The period of limitation shall be—

(a) six months, if the offence is punishable with fine only;

(b) one year, if the offence is punishable with imprisonment for a term not exceeding one year;

(c) three years, if the offence is punishable with imprisonment for a term exceeding one year but not exceeding three years.

The Apex Court passed a Judgment dated 13-04-2022 and made the following observations in this case:

1) That Section 486 (2) (b) CrPC provides that a court should take ‘cognizance’ within 1 year from the date of commission of offence, if the offence is punishable with imprisonment for a term not exceeding one year. Thus, if there be any offence committed in terms of the provisions of the (DV) Act, the limitation prescribed under Section 468 of the Code will apply from the date of commission of such offence.

2) That Section 31 of the DV Act provides that a breach of protection order passed under Section 12 of DV Act constitutes an offence and attracts imprisonment for one year or fine or both.

Thus, based on the aforesaid observations, the Supreme Court held that the High Court erred in reckoning the period of limitation under CrPC while dealing with an Application under Section 12 of the DV Act and observing that the said Application ought to have been filed within a period of one year of the alleged acts of domestic violence. As a result, the High Court Judgment dated 16-03-2020 in Crl. O.P. No.28924 of 2018 has been dismissed. Further, the Magistrate would hear and decide upon the issue that there is a long gap of 10 years between the Appellant leaving her matrimonial home in 2008 and filing the Section 12 Application in 2018. Thus, the Apex Court directed the Respondent-Husband to appear before the Trial Court within 2 weeks to file his response.