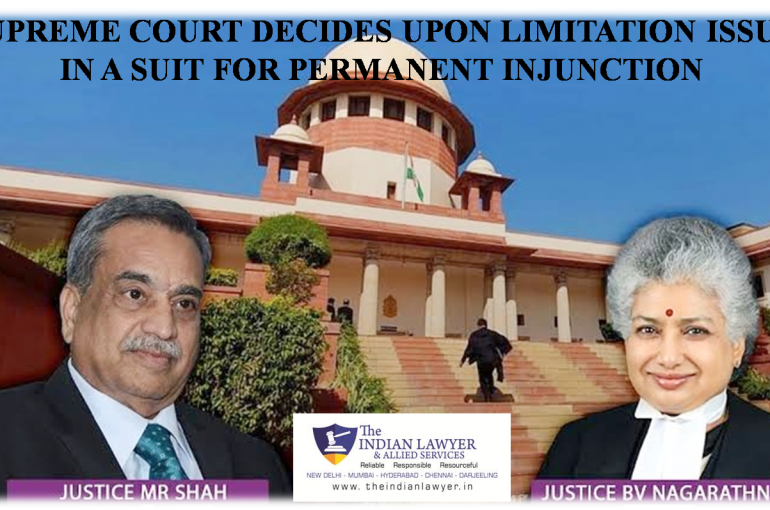 A Two Judge Bench of the Supreme Court comprising of Justice M.R. Shah and Justice B.V. Nagarathna passed a Judgment dated 14/03/2022 in Sri Biswanath Banik and Another v. Smt. Sulanga Bose and Others Civil Appeal No. 1848/ 2022 and decided upon the limitation issue in a suit for permanent injunction.

In the present case, one, Biswanath Banik (Appellants – original Plaintiffs) had instituted a Title Suit No. 166 of 2010 before the Court of Civil Judge, Senior Division, Sealdah (Trial Court) against one, Sulagna Bose (Respondents – original Defendants) seeking declaration of right, title interest in the Suit Property and for confirmation of Appellant’s possession, on the ground of part performance of contract as provided under Section 53A of the Transfer of Property Act 1882 (Part performance). The Appellants also prayed for enforcement of the agreement directing the Respondent to execute and register Deed of Conveyance in favour of the Appellants. In addition, the Appellants sought for a decree for permanent order of injunction restraining the Respondent  and his men and agent from causing any interference and/or any obstruction to the peaceful enjoyment and possession of the Suit Property and further restraining the Respondent from making any attempt to dispossess the Appellant forcefully and illegally from the Suit Property.

Having served with the Suit Notice, the Respondent submitted an Application before the Trial Court seeking rejection of Plaint filed by the Appellant under Order VII Rule 11 CPC (Rejection of Plaint) mainly on the ground that the Suit is barred by limitation and that the Suit for a declaration simpliciter under Section 53A of the Transfer of Property Act would not be maintainable. That the Trial Court vide Order dated 28-03-2017 rejected the said Application and refused to reject the Plaint in exercise of powers under Order VII Rule 11 CPC.

Aggrieved by the Trial Court Order dated 28-03-2017, the Respondent filed an Application under Order VII Rule 11 CPC seeking rejection of Plaint pertaining to Title Suit No. 166 of 2010 before the Calcutta High Court in CO/1417/2017 Sulagna Bose vs Biswanath Banik. The High Court passed a Judgment dated 28-04-2017 and observed that the cause of action to sue for specific performance arises on the date of refusal to perform, the suit had to be instituted within three years thereafter. The suit was instituted in the year 2010 though the deliberate avoidance of the execution of the deed of conveyance appears to have been in the year 2004. Further, the High Court held that suit for a declaration simpliciter under Section 53A of the Transfer of Property Act would not be maintainable against the actual owner.

Hence, as the Suit for specific performance was not instituted within the three-year limitation period, thus, the High Court allowed the Application filed by the Respondent under Order VII Rule 11 CPC seeking rejection of Plaint and thereby, quashed the Order passed by the Trial Court dated 28-03-2017. Aggrieved by the High Court Judgment dated 28-04-2017 that rejected the Plaint, the Appellant filed an Appeal before the Supreme Court. The Apex Court passed a Judgment dated 14-03-2022 and made the following observations:

After considering the submissions, the Supreme Court observed that only in a case where on the face of it, it is seen that the suit is barred by limitation, then and only then, a plaint can be rejected under Order VII Rule 11(d) CPC on the ground of limitation, and for the said purpose, the Court has to consider and read the averments in the plaint as a whole and cannot reject the plaint by reading only few lines or passages and ignoring the other relevant parts of the plaint.

Further, Justice Shah observed that when the suit is for a decree of permanent injunction and it is averred that the plaintiffs are in possession of the suit property pursuant to the agreement and thereafter, they have developed the land and that they are in continuous possession since more than twelve years and they are also paying taxes to the Corporation, the cause of action can be said to have arisen on the date on which the possession is sought to be disturbed.

If that be so, the suit for decree for permanent injunction cannot be said to be barred by limitation, as it is the settled proposition of law that the plaint cannot be rejected partially, added the Bench.

Justice Shah further said that whether the plaintiffs shall be entitled to any relief u/s 53A of the Transfer of Property Act or not has to be considered at the time of trial, but at this stage it cannot be said that the suit for the relief sought u/s 53A would not be maintainable at all and therefore the plaint is liable to be rejected in exercise of powers under Order VII Rule 11 CPC.

Accordingly, the Supreme Court set aside the High Court Judgment dated 28-04-2017 and thereby, restored the Trial Court Order dated 28-03-2017. As a result, the Appeal has been allowed.