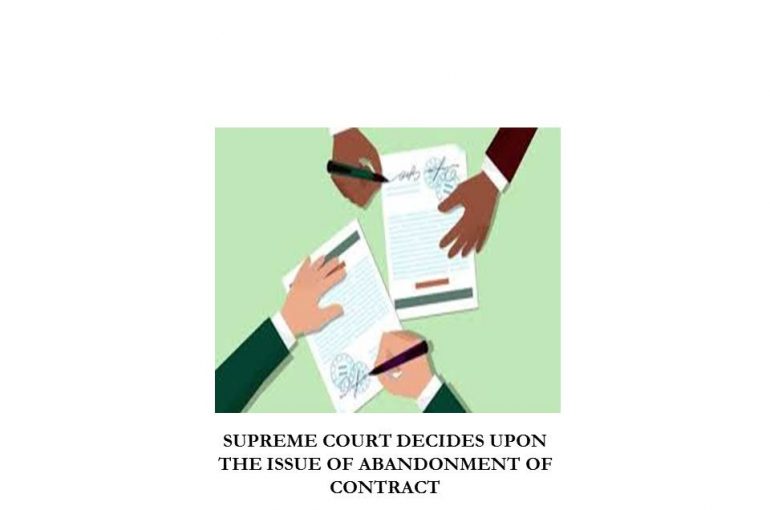 SUPREME COURT DECIDES UPON THE ISSUE OF ABANDONMENT OF CONTRACT

A Division Bench of the Hon’ble Supreme Court of India comprising of Justice Hemant Gupta and Justice V. Ramasubramanian passed a Judgment dated 30-03-2022 in the case of Shripati Lakhu Mane v. The Member Secretary, Maharashtra Water Supply and Sewerage Board & Ors. {Civil Appeal No.556 of 2012} and held that in case a contractor refuses to continue execution of his part of work till such time that the reciprocal promises are performed by the opposite party, such an act cannot be construed as an abandonment of contract.

In the present case, the Appellant, Mr. Shripati Lakhu Mane, who was a registered Contractor with the State of Maharashtra, became a successful tenderer, in a tender for execution of work related to Regional Rural Piped Water Supply Scheme for Dabhol-Bhopan and other villages in   Ratnagiri District. The Appellant was issued a Work Order on 03-07-1986, for execution of work at the cost of Rs. 80,45,034/­ (this was 47% above the estimated cost) and also a Contract which stipulated that the time period for the completion of work was 30 months was registered. However, the Respondent No. 3 issued a Letter dated 28-07-1986 to the Appellant and informed that the work order was temporarily suspended. Thereafter, the Respondent No. 3 vide Letter dated 17-12-1986 informed the Appellant to start the work.

The Appellant commenced work from 29-12-1986, however, he was informed about the non-availability of C­1 pipes and cement pipes of the diameter as stipulated in the Contract. Later on, the Respondents wanted a change in the terms of the Work Order by substituting pipes of different diameter, for which the Appellant demanded a modified rate. Meanwhile, the Respondent No. 3 vide Letter dated 02-03-1987 instructed the Appellant to stop the pipeline work and start the construction of another work at a different place namely Panchanadi.  Subsequently, the Respondent No. 2 vide Letter dated 04-03-1987 informed the Appellant about the construction of one head­work at Karjai and another at Panchanadi. In connection with this, a Work Order dated 01-07-1987 was issued.

Since the Bills raised by the Appellant were not honoured due to a shortage of funds, the Appellant refused to proceed with the work. Resultantly, the Respondent No. 2 threatened the Appellant with the withdrawal of the Work Order and further to levy a fine of Rs. 10/­ per day from 01-03-1988. This dispute between the Appellant and the Respondents led to the filing of a Recovery Suit by the Appellant for a sum of Rs. 51,35,289/­- before the Trial Court under several heads such as (i) value of the work done; (ii) release of the security deposit; (iii) compensation; and (iv) damages etc.

The Trial Court vide Judgment and Order dated 02-02-1998 decreed the Suit partially and directed the Respondents to pay the Appellant, a sum of Rs. 24,97,077/­ together with interest at 10% per annum from the date of the Suit till realization.

Aggrieved by the Trial Court Judgment and Order dated 02-02-1998, the Respondents filed a Civil Appeal under Section 96 of the Code of Civil Procedure, 1908 (CPC) before the High Court of Judicature at Bombay (High Court). The High Court vide Judgment and Decree dated 24-04-2009 allowed the Appeal partially and reduced the Decree amount to Rs.7,19,412/- together with interest. Further, the High Court disallowed three out of nine heads of claims.

The Supreme Court made an observation that the High Court rejected these three claims solely on the ground that the Appellant had abandoned its work under the main Contract. In this regard, the Apex Court after carefully perusing the facts of the case and the timeline of the events noted that the Appellant was not guilty of abandonment. While placing reliance on Section 3(a) of the Contract entered into between the parties to the dispute, the Bench noted that this particular Clause enabled the Respondents to rescind the Contract, forfeit the security deposit and entrust the work to another contractor at the risk and costs of the Appellant.   However, this Clause was never invoked by the Respondents.

While referring to Section 67 of the Indian Contract Act, 1872 (Act) i.e. (Effect   of   neglect   of   promise to afford promisor reasonable facilities for performance), the Supreme Court observed that “19. It is fundamental to the Law of Contract that whenever a material alteration takes place in the terms of the original contract, on account of any act of omission or commission on the part of one of the parties to the contract, it is open to the other party not to perform the original contract. This will not amount to abandonment. Moreover, abandonment is normally understood, in the context of a right and not in the context of a liability or obligation. A party to a contract may abandon his rights under the contract leading to a plea of waiver by the other party, but there is no question of abandoning an obligation. In this case, the appellant refused to perform his obligations under the work­order, for reasons stated by him. This refusal to perform the obligations, can perhaps be termed as breach of contract and not abandonment.”

“22. The refusal of a contractor to continue to execute the work, unless the reciprocal promises are performed by the other party, cannot be termed as abandonment of contract. A refusal by one party to a contract, may entitle the other party either to sue for breach or to rescind the contract and sue on a quantum meruit for the work already done.”

For easy reference, Section 67 of the Act is reproduced below:

A contracts with B to repair B’s house.

B neglects or refuses to point out to A the places in which his house requires repair.

A is excused for the non­performance of the contract, if it is caused by such neglect or refusal.”

Further, the Bench made an observation that the Respondents did not choose to rescind the Contract and sue for damages in terms of Clause 3 (a) and (b) and it was the Respondents who   made it difficult for the Appellant to execute the Contract as per the terms originally agreed between the Parties.