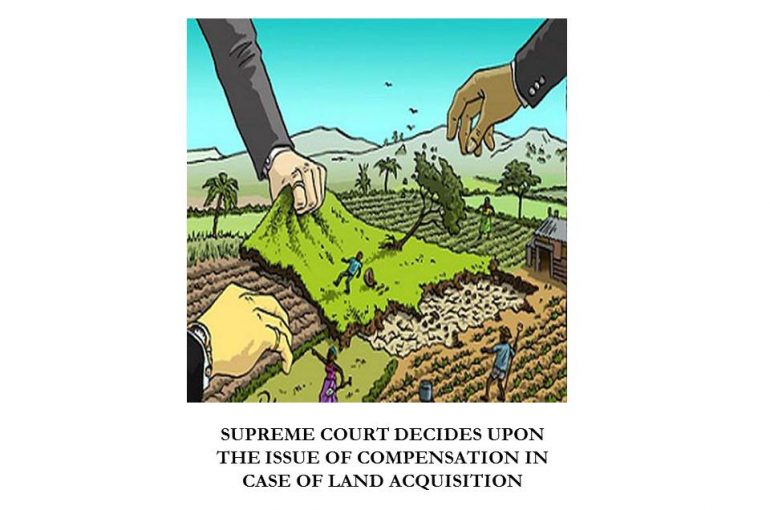 In the present case, one Sagar Maize Products Ltd. (the Company),  in the year 1986-87 purchased an area of 0.361 hectares of Survey Nos.1927/2, 1928/2 and an area of 1.317 hectares of Survey No. 1929 on Ujjain Road in Village Maksi. After the said purchase, the Company got permission to convert the agricultural land to use for industrial purposes and has also started civil work for installation of the factory for which certain pillars were raised.

The land measuring 0.244 hectares owned by the Company was acquired for the Railway Line in Survey No. 192 by the Government 9. Accordingly, the Company laid a Claim against such land acquisition before the Land Acquisition Collector. The Land Acquisition Collector passed an Award on 02-06-1992 thereby awarding a compensation of Rs.30,000/- per hectare i.e., @ Rs.5/- per square feet as the market value of the land acquired. In addition thereto, the Company was awarded a compensation of Rs.72,320/- on account of expenditure incurred on construction of 40 pillars, 19 situated within a periphery of 30 meters from the proposed Railway Line and other 21 pillars lying outside the 30 meters periphery, apart from the statutory benefits.

Aggrieved by the factors used for determining the market value of the land acquired, the land owners and the Company sought reference under Section 18 of the Act (Reference to Court). The Reference Court awarded a compensation of Rs.40/- per square feet for the land acquired and also for the entire land of the Company admeasuring 2.038 hectares on the ground that the unacquired land cannot be utilized for the purpose intended to be used by the Company. In respect of 26,325 square feet land to be used for laying of the Railway Line, the Reference Court awarded a compensation of Rs.10,53,000/-.

Thus, compensation @ Rs.40/- per square feet was awarded for the entire land purchased by the Company, apart from the statutory benefits awarded to the Company and to the other land owners.

The Supreme Court after perusing the facts of the case and the submissions made by the Parties to the dispute, placed reliance on Indian Railways Way and Works Manual (Para 827) and also on the Circular dated 08-09-1988 and observed that

“30 meters of land on both sides of Railway Line can be said to be restricted area but it does not mean that the land cannot be utilized for any purpose. The communication dated 19-12-1991 on behalf of the Urban and Rural Department of the State is to the effect that distance of 30 meters of land is to be kept. Firstly, the distance norms are of the Railways and not of the State. Still further, the distance of 30 meters from the railway track can be left unoccupied but not 15 + 30 meters. However, since the land was purchased by the Company for the purpose of setting up of an industrial unit, therefore land to the extent of 30 meters on both sides cannot be put to effective use by the Company. Therefore, we deem it appropriate to grant compensation to the Company for the land on both sides of railway track to the extent of 30 meters from middle of the railway track”

The Apex Court while referring to the case of Lal Chand v. Union of India & Anr (2009) 15 SCC 769 wherein it was held that the Brochure issued by the Development Authority pertaining to fully developed plots cannot form basis for award of compensation for acquisition of undeveloped lands and further made the following observation:

“23. Matters to be considered in determining compensation.—

(1) In determining the amount of compensation to be awarded for land acquired under this Act, the Court shall take into consideration— first, the market-value of the land at the date of the publication of the notification under Section 4, sub-section (1);

secondly, the damage sustained by the person interested, by reason of the taking of any standing crops or trees which may be on the land at the time of the Collector’s taking possession thereof;

thirdly, the damage (if any) sustained by the person interested, at the time of the Collector’s taking possession of the land, by reason of severing such land from his other land;

fourthly, the damage (if any) sustained by the person interested, at the time of the Collector’s taking possession of the land, by reason of the acquisition injuriously affecting his other property, movable or immovable, in any other manner, or his earnings;

fifthly, if, in consequence of the acquisition of the land by the Collector, the person interested is compelled to change his residence or place of business, the reasonable expenses (if any) incidental to such change; and

Thus, the Supreme Court while relying upon the aforementioned Judgments and provisions held that the process of determining compensation by the Reference Court was wholly fallacious and the Appeal of the Company claiming enhancement of the compensation @ Rs.40/- per square feet was untenable. The Bench dismissed the Civil Appeal No. 5031 of 2022 filed by the Company and allowed the Civil Appeal Nos. 5006-5010 of 2022 filed by the Union of India.

The Apex Court while allowing compensation for acquisition of land passed the following directions: