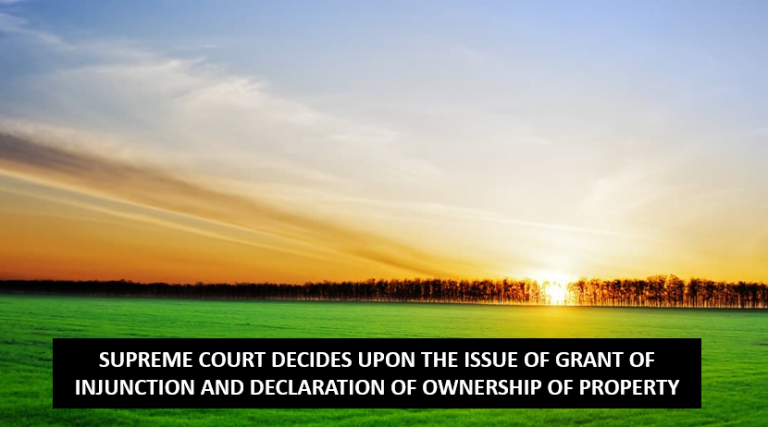 A Two -Judge Bench of the #SupremeCourt comprising of J. L. Nageswara Rao and J. Aniruddha Bose has in the matter of Akkamma & Ors vs Vemavathi & Ors Civil Appeal No. 5884 of 2009, passed a Judgment dated 25-11-2021 and decided upon the issue of grant of #injunction and #declaration of ownership of a #property.

In this case, the Plaintiff, Mr. Arakeri Abbaiah filed a Suit for Perpetual Injunction in the Court of XVIII Additional City Civil Judge at Bangalore City (Trial Court) in 1982 (1982 Suit), seeking injunction against Defendants in respect of an immovable property comprising of 10.54 Guntas situated in Vibhuthipura Village, Krishnarajapura Hobli, Bangalore South Taluk (Property). The Property is said to have been purchased by the Plaintiff vide Sale Dee dated 29-05-1972. After the Plaintiff’s death, his Legal Representatives were brought on record. Similarly, after the Defendant’s death, his Legal Representatives were brought on record. However, the Trial Court dismissed the Suit on the ground that the Plaintiff could not prove his lawful possession of the said Property.

Aggrieved, the Legal Representatives of the Plaintiff filed an Appeal before the Karnataka High Court, vide Order dated 25-11-1986.

Thereafter, the Legal Representatives of the Plaintiff filed another Suit in 1987 (1987 Suit) seeking injunction against Defendants from interfering with their peaceful possession of the Property and seeking a comprehensive relief of declaration that the Plaintiff was the absolute owner of the Property. However, the Trial Court passed an Order dated 07-11-1997 and dismissed the 1987 Suit in view of the dismissal of the 1982 Suit. Aggrieved, an Appeal was filed before the High Court, which allowed the Appeal vide Order dated 19-08-2004 and remitted the case to Trial Court.

Thereafter, the Trial Court passed an Order dated 18-12-2004 and held that although the Plaintiffs have proved their ownership / title to the Property, but they could not prove that they have been in possession of the said Property. In fact, the Defendants had been in possession of the Property for the purpose of cultivation. Hence, in absence of declaration of relief of possession by the Plaintiff, the relief of declaration of title cannot be granted. Further, the Suit is barred by limitation and hence, the Suit was dismissed.

Aggrieved, the Plaintiffs filed Appeal before the High Court with an Application seeking Amendment of the Plaint for alternative relief for recovery of possession of the Property, which was dismissed vide Order dated 21-07-2008 for the reasons given below:

Further the dispute of title is confirmed by filing the Written Statement by the Defendant No. 1 on 28/01/1983 but the Plaintiff filed the present suit on 02/03/1987 after lapses of 4 years 2 months. The Plaintiff had to file this suit within 3 years from the date of filing the written statement by the present Defendant in O.S 3029/82. But filed after 4 years two months. So, the Suit filed by the Plaintiff for declaration of title is barred by time. Accordingly I answer Issue No. 5 in affirmative.”

Aggrieved, the Plaintiffs filed Appeal before the Supreme Court. The Apex Court passed a Judgment dated 25-11-2021 and made the following observations:

1) That the Plaintiffs have admitted in the 1982 Suit that the Defendants were in possession of the Property for the purpose of cultivation.

2) Further, the Plaintiffs could not prove repossession of Property because of which injunctive relief was not granted by the Trial Court.

3) That Section 34 of the Specific Relief Act 1963 (1963 Act) creates a bar on declaration of any status or right over a property, if the plaintiff does not seek for such relief. The provision is reproduced below for easy reference:

Section 34. Discretion of court as to declaration of status or right.—

Any person entitled to any legal character, or to any right as to any property, may institute a suit against any person denying, or interested to deny, his title to such character or right, and the court may in its discretion make therein a declaration that he is so entitled, and the plaintiff need not in such suit ask for any further relief:

Provided that no court shall make any such declaration where the plaintiff, being able to seek further relief than a mere declaration of title, omits to do so

Explanation.—A trustee of property is a “person interested to deny” a title adverse to the title of someone who is not inexistence, and for whom, if in existence, he would be a trustee.

4) However, the said bar under Section 34 of the 1963 Act won’t apply in this case, as the Plaintiffs had sought for injunctive relief in the 1987 Suit. The prohibition contained in the proviso to Section 34 would operate only if the sole relief is for declaration without any consequential relief.

5) But as the Suit was barred by limitation, the injunctive relief was not granted by the Trial Court.

6) However, such factor should not have been a ground for denying declaration of ownership / title to the Property. There is no bar in the Specific Relief Act, 1963 in granting standalone declaratory decree.

Thus, based on the aforesaid grounds, the Supreme Court held that the Plaintiff was entitled to declaration that he was the absolute owner of the suit Property and there should be a decree to that effect. However, the injunctive relief being barred by limitation was not allowed by the Apex Court as well.