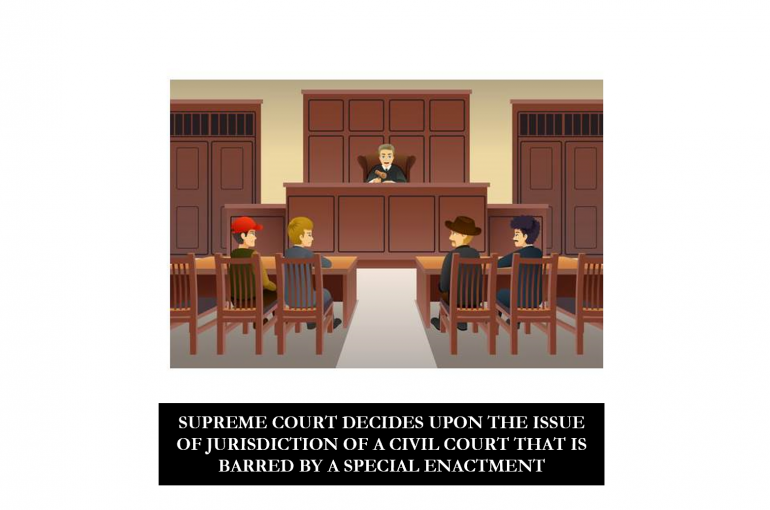 A two Judge Bench of the Hon’ble Supreme Court of India comprising of Justice Dr Dhananjaya Y Chandrachud and Justice A S Bopanna passed a Judgment dated 08-08-2022 in the case of Sau Rajani v. Sau Smita & Anr [Civil Appeal No 5216 of 2022 (Arising out of SLP(C) No 1580 of 2021)] and decided upon the issue of jurisdiction of a civil court, when such jurisdiction is barred by a special enactment.

In the present case, the Plaintiff/Appellant had instituted a Regular Civil Suit No 775 of 1993 (Suit) before the Court of the Civil Judge (Junior Division), Amravati, (Trial Court). The Appellant contended that Amravati Housing and Area Development Board (Defendant No. 2/Second Respondent) allotted Block No 4/6 situated on the first floor at Tope Nagar, Amravati to her on 16-07-1986 and that the Plaintiff/Appellant was in possession of the Residential Tenement.  The Defendant No. 1/First Respondent was in occupation of the ground floor tenement in the same building bearing Block No 4/2.

According to the Plaintiff/Appellant, the Defendant No.1/First Respondent made an illegal and unauthorized construction in an open vacant site situated in the northern and eastern side of the Block. Allegedly, the Defendant No.1/First Respondent constructed four rooms, as a consequence of which the Plaintiff/Appellant claimed in the Suit that her easements were being affected.

The Plaintiff/Appellant alleged that the following disturbances were caused to her easements:

Accordingly, the Plaintiff/Appellant instituted a Suit before the Trial Court.

The Defendant No.1/First Respondent filed a written statement and contended that the Civil Court did not have the jurisdiction to entertain the Suit under the provisions Section 71 (Bar of jurisdiction of civil courts) read with Section 177 (Bar of jurisdiction) of the Maharashtra Housing and Area Development Act 1976 (Act).

Section 71 and Section 177 of the Act are reproduced below for quick reference:

71. Bar of jurisdiction of civil courts.—No civil court shall have jurisdiction to entertain any suit or proceeding in respect of the eviction of any person from any Authority premises under this Chapter, or the recovery of the arrears of rent, compensation, amount or damages for use and occupation of such premises, or in respect of any order made or to be made or any action taken or to be taken by the Competent Authority or the appellate officer in the exercise of any power conferred by or under this Chapter, or to grant any injunction in respect of such order or action.

177. Bar of jurisdiction.—Save as otherwise expressly provided in this Act, no civil court shall have jurisdiction in respect of any matter which the Authority or the Tribunal is empowered by or under this Act, to determine; and no injunction or stay shall be granted by any court or other authority in respect of any action taken or to be taken in pursuance of any power conferred or duty imposed by or under this Act.

The Civil Judge (Junior Division), Amravati made the following observations:

Based on the aforesaid observations, the Trial Court directed the Defendants/Respondents to remove the illegal and unauthorized construction made by the Defendant No.1/Respondent No. 1 on the open space towards the eastern and northern side of Block No.4/2; Both the Respondents were directed to restore the water connection to the Plaintiff/Appellant’s house by removing the obstructions which are made in the service line; the Defendant No.1/Respondent No. 1 or anybody on her behalf was permanently restrained from making encroachment as well as making any construction on the open site causing any nuisance to the Plaintiff/Appellant’s Tenement.

Assailing the Judgment passed by the Trial Court, the Defendant No.1/First Respondent filed an Appeal being Regular Civil Appeal No 37 of 1999, under Section 96 of the Code of Civil Procedure, 1908 (CPC) (Appeal from Original Decree). This Appeal was dismissed vide Order dated 21-11-2003. The District Court affirmed the finding of the Trial Judge that it had the jurisdiction to entertain the Suit.

The District Judge held that the “Appellant – who is the Plaintiff in the Suit – is affected by the encroachment which has been made by the First Respondent on premises belonging to the Authority. In the view of the District Judge, since the individual rights of the Appellant were affected by the unauthorized construction, the Suit was maintainable and was not barred by the provisions of Section 71.”

The Single Judge of the Nagpur Bench of the High Court of Judicature at Bombay (High Court) vide Judgment 11-12-2019 allowed the Second Appeal No 111 of 2004 filed under Section 100 of the CPC (Second Appeal) against the Judgment of the District Judge holding that the Suit was barred in terms of the provisions of Sections 71 and 177 of the Act. Referring to Section 66(1)(a)(iv) (Power to evict certain persons from Authority premises) of the Act, the High Court observed “that the Competent Authority has the power to evict persons from Authority premises if it is satisfied that material alterations have been made without its previous permission. The High Court held that since the remedy of eviction is provided for in the Act, the Civil Court does not have jurisdiction to entertain a suit on a cause of action on which the Competent Authority is empowered to take action.”

The Apex Court after perusing the facts of the case, observed that under Section 9 (Courts to try all civil suits unless barred) of the CPC, the Civil Court has the jurisdiction to try all suits of a civil nature, except those in respect of which the jurisdiction is barred either expressly or impliedly by a specific provision of law.

The Bench placed reliance on the case of Ramesh Gobindram v. Sugra Humayun Mirza (2010) 8 SCC 726 and observed as follows:

The Supreme Court held that the Act is intended “to unify, consolidate and amend the laws relating to housing, repairing and reconstructing dangerous buildings and carrying out improvement works in slum areas. The objective of the bodies and authorities constituted under the Act is to ensure repairing and reconstructing buildings to provide housing. The Appellant instituted the Suit for injunction because her easements were infringed by the illegal construction which the First Respondent had erected on the open space. The reliefs claimed by the Appellant are beyond the scope of the Act. A suit of this nature will be maintainable before the Civil Court and would not be barred by Section 71 or Section 177 of the Act.”

Based on the aforementioned observations and findings, the Apex Court held that the Single Judge of the High Court erred in upholding the plea that there was a bar on the jurisdiction of the Civil Court and further erred in reversing the findings of the Trial Court and the First Appellate Court. The Supreme Court thereby restored the Second Appeal to the file of the High Court for consideration on merits.

The Bench allowed the Appeal and set aside the Impugned Judgment and Order passed by the High Court dated 11-12-2019 in Second Appeal No 111 of 2004. Further, the Supreme Court directed that since the Appeal pertains to the year 2004, the High Court has to take up the matter for admission expeditiously and dispose of the matter within a period of three months from the date on which a certified copy of the Order of the Apex Court is produced before the High Court.