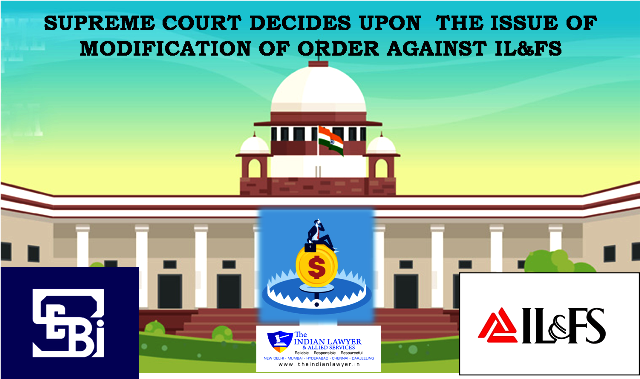 SUPREME COURT DECIDES UPON THE ISSUE OF MODIFICATION OF ORDER AGAINST IL&FS SECURITIES SERVICES LTD.

A Two Judge Bench of the Supreme Court comprising of Justice Vineet Saran and Justice J.K. Maheshwari passed a Judgment dated 11.04.2022 in SEBI vs IL&FS Services Ltd and ORS, C.A. No.-005395-005398/2019 and decided upon the issue whether the operative part of its earlier Order dated 21.09.2021 deserves to be modified in a dispute pertaining to release of mutual funds in favor of the Respondent.

Facts of the Case:

Therefore, the Apex Court held, “the subsequent supplementary charge sheet submitted by the EOW, and relied upon by the learned counsel for the petitioner, ought not to be ignored while considering this matter. In its earlier orders, this Court has clearly found that the securities need to be released in favour of the applicant/Respondent No.5. The only question is with regard to the mode and manner of the securities to be furnished by the applicant/Respondent No.5. It is not disputed that the petitioner has, in terms of the order dated 16.03.2021, complied with the condition of furnishing bank guarantee of Rs.344.07 Crores.

In paragraph 20 of this application filed by the applicant/Respondent No.5, it is stated that the applicant is a public limited company, having sound financials with a strong Balance Sheet and other financial statements (assets of INR 18,556 Crores and turnover of INR 8,779 Crores during financial year 202021). The same is not denied by the other parties who have filed their respective replies to this application.”