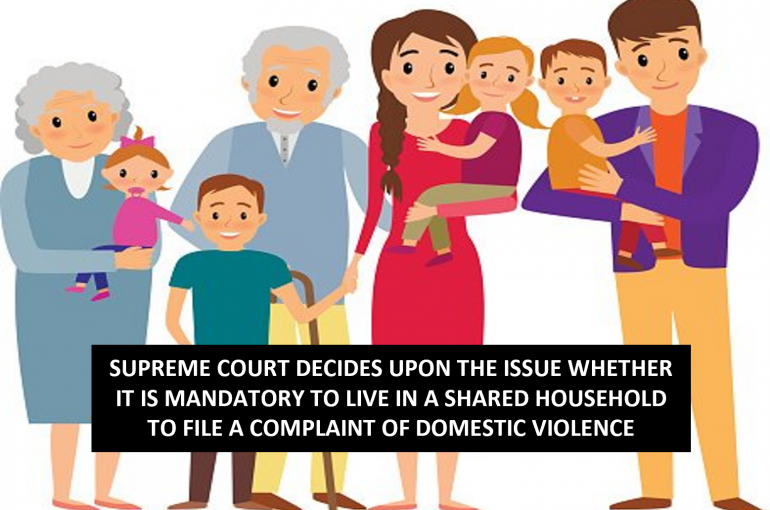 In a recent case of Prabha Tyagi vs Kamlesh Devi Criminal Appeal No. 511 of 2022, a two Judge Bench of the Supreme Court comprising of Justice MR Shah and Justice BV Nagarathna passed a Judgment dated 12-05-2022 and decided upon the issue whether it is mandatory to live in a shared household to file a complaint under Protection of Women from Domestic Violence Act, 2005 (DV Act).

In this case, one, Ms Prabha Tyagi (Appellant) married Mr Kuldeep Tyagi (now, Deceased) on 18-06-2005 at Haridwar. During their marriage, the Appellant’s family members had given dowry including an Alto Car to the Deceased’s family and stridhana to the Appellant. Immediately after the Marriage, the Appellant was residing at her Husband’s ancestral home along with her Mother-in-Law (Respondent No. 1), two brothers-in-law, wife of her Husband’s elder brother and six sisters-in-law. Later all of them started living at Jhabreda, Haridwar. Within one month of their Marriage, the Appellant’s Husband passed away in a car accident on 15-07-2005. Thereafter, the Appellant started living at her father’s house in Delhi. As per the Appellant, she had conceived a child by then. A daughter was born out of this wedlock on 30-03-2006 and owing to the mistreatment and torture by her in-laws at her matrimonial house, she had to move out with her daughter to Dehradun, where she began teaching in a school. But she left behind her stridhana at her matrimonial house, which was being used by the Respondents. Hence, the Appellant sent a Legal Notice dated 22-11-2006 to the Respondents asking them to return her stridhana. However, there was no response received from the Respondents. Further, the Respondents threatened the Appellant that she would have to face dire consequences if she ever attempted to claim right / title in the Deceased Husband’s property at Jhabreda, Haridwar, etc. They also claimed that the Deceased was not the father of the Appellant’s Daughter.

The Trial Court passed a Judgment dated 12-05-2011 and partly allowed the Application and directed as follows:

i) the Respondents to pay Rs. 10,000/- as monetary compensation for emotional loss suffered by the Appellant as the Respondents insulted and maligned her by claiming that the Deceased was not the father of the Appellant’s Daughter. Such acts amount to domestic violence under Section 3 (d) (iii) of the DV Act (verbal and emotional abuse).

ii) the Respondents to return the stridhana, except the Alto Car, to the Appellant at her Dehradun residence, as the Respondents could not prove that no stridhana was given at the time of marriage.

iii) the Respondents are restrained from obstructing the Appellant and her Daughter from enjoying the Deceased’s property including her matrimonial house, as she had not remarried after her Husband’s death and continued to remain the daughter-in-law of the Respondents’ family. Hence, she would be entitled to enjoy the same facilities as enjoyed by her Deceased Husband during his lifetime.

Aggrieved, the Appellant filed Criminal Revision Petition before the High Court of Uttarakhand at Dehradun, which upheld the Judgment dated 11-07-2014 passed by the Vth Additional Sessions Judge, Dehradun, vide Judgment dated 23-07-2019 on the grounds that (a) as per Section 12 (1) of the DV Act, a domestic incident report is mandatorily required to be filed by a Protection Officer or a service provider before the Magistrate and the Magistrate has to take cognizance of an offence under the DV Act on the basis of such report. In the present case, the Appellant only filed an Application alleging domestic violence without any such domestic incident report. (b) Further, in order to establish commission of domestic violence by the Respondents, it is required that the Appellant shares a household with the Respondents and establish a domestic relationship with them. However, this was not a case of shared household between the Appellant and the Respondents.

Aggrieved, the Appellant filed Criminal Appeal before the Supreme Court, thereby challenging the Judgments of the Vth Additional Sessions Judge, Dehradun and High Court of Uttarakhand at Dehradun dated 11-07-2014 and 23-07-2019 respectively. The Apex Court made the following observations in this case:

1) That Section 2 (f) of the DV Act defines a “domestic relationship” as a relationship between two persons who live or have, at any point of time, lived together in a shared household, when they are related by consanguinity, marriage, or through a relationship in the nature of marriage, adoption or are family members living together as a joint family;

4) Thus, a daughter, sister, wife, mother, grand-mother or great grand-mother, daughter-in-law, mother-in-law or any woman having a relationship in the nature of marriage, an adopted daughter or any member of joint family has the right to reside in a shared household.

5) Further, the right of residence of the aforesaid categories of women including a daughter-in-law and a mother-in-law and such other categories of women in a domestic relationship is guaranteed under Section 17 (1) of the DV Act. Further, as per Section 17 (2), a woman subjected to domestic violence cannot be evicted or excluded from the shared household or any part of it.

7) Thus, if a woman has the right to reside in the shared household under Section 17 of the DV Act and such a woman becomes an aggrieved person or victim of domestic violence, she can seek reliefs under the provisions of DV Act including enforcement of her right to live in a shared household, irrespective of whether she has resided therein at all or not.