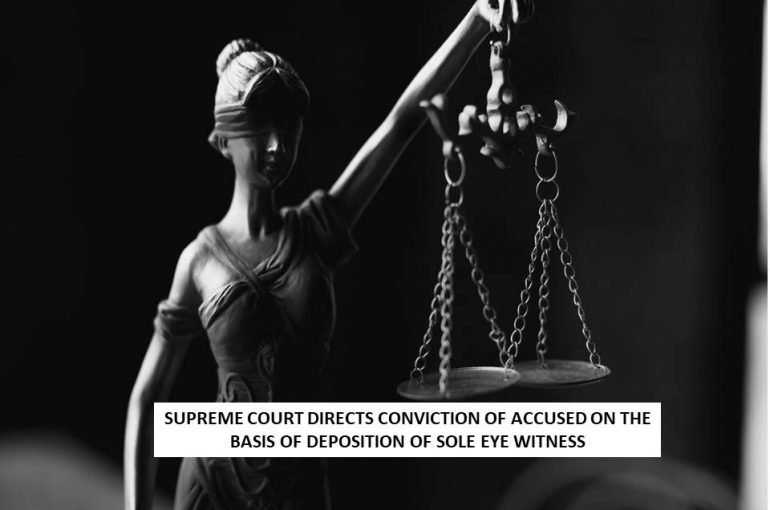 A two Judge Bench of the Supreme Court comprising of Justice M.R. Shah and Justice Krishna Murari, passed a Judgment dated 14.10.2022 in the case titled as State through the Inspector of Police v. Laly @ Manikandan & Another Etc. in Criminal Appeal No. 1750-1751 Of 2022 and held that the accused can be convicted if there is a direct evidence in the form of an eye witness, even in the absence of examination of original complainant or recovery of weapon.

In this case, there was an enmity between one, Periyavan @ Murugan and Selvakumar who was the friend of the Accused-Laly @ Manikandan (Respondent). On 31.07.2013 Selvakumar was murdered because of his enmity with Periyavan @ Murugan. Presuming that the information regarding the location of Selvakumar was shared by one, Saravanan (Deceased), the Accused-Respondent, on a two-wheeler armed with weapons obstructed and attacked the car in which the Deceased, Prosecution Witness (PW) 1 (Sole Eye Witness) and Mahendran were travelling. The Deceased tried to escape, but the Respondent chased him and thereafter caused the injuries which ultimately resulted in death of Saravanan on the spot somewhere in Madras, Tamil Nadu.

Thereafter, Mahendran (Original Complainant) filed a Complaint before e the Sub Inspector of Police, Thiruvidaimarudu Police Station on 31.07.2013 based on which FIR was registered in Crime No. 236 of 2013 under Section 341 (Punishment for wrongful restraint) and 302 (Punishment for Murder) of the Indian Penal Code, 1860 (IPC). Sometime between 02.08.2013 – 17.08.2013, all the Accused persons were arrested. Based on the findings of the Police, a Charge Sheet was filed against all the Accused persons for commission of offences under Sections 341 (Punishment for wrongful restraint), 506(2) (Punishment for Criminal Intimidation), 302 Punishment for Murder) IPC r/w 3(1) of Tamil Nadu Property (Prevention of Damage and Loss) Act, 1992 (Punishment for committing mischief in respect of [property]) and S.C. No. 254 of 2014 was committed to the II Additional District and Sessions Judge, Thanjavur for trial of the case (Trial Court).

On the Deposition of PW1, PW4 and PW6, the learned Trial Court vide Judgment dated 19.01.2016 convicted the Accused and sentenced him to undergo life imprisonment. However, it must be noted that during the trial, PW2, PW3 and PW5 did not support the Prosecution case and were declared hostile.

Aggrieved by the High Court Judgment dated 12.06.2018, the State preferred the present Appeal before the Supreme Court. Dr. Joseph Aristotle S, Learned Counsel on behalf of the State appeared and stated that PW1 is the eye witness of the happening of the event and he has fully supported the case of the Prosecution. Further the Prosecution has proved the case against the Accused beyond reasonable doubts by examining the relevant witnesses.  Learned Counsel Shri Rao Ranjit on behalf of the Respondent submitted that the Judgment and Order of Trial Court was impugned as there were material contradictions in the deposition of witnesses. Further he submits that Original Complainant was never examined during the Trial and relying on sole deposition of eye witness is not safe to convict the Accused.

The Apex Court vide Judgment dated 14.10.2022 held that the deposition of PW1 is reliable and there is no reason to doubt his credibility and reliability. The facts that the Original Complainant and other independent witnesses were never examined and the weapon was not recovered, are not enough grounds for the acquittal of the Accused. As per settled position of law, if the sole eye witness is found to be trustworthy and/or reliable, then there can be a conviction on the said witness deposition. There is no ground of doubt for the credibility and/or reliability of PW1. Thus, it will be safe to convict the Accused on the sole reliance of deposition of PW1.

As a result, the present Appeal was allowed and accordingly the Judgment and Order of the High Court dated 12.06.2018 acquitting the Accused was quashed and set aside. The Accused would thereupon have to undergo the sentence imposed by the learned Trial Court, within a period of six weeks from the date of the Judgment dated 14.10.2022.