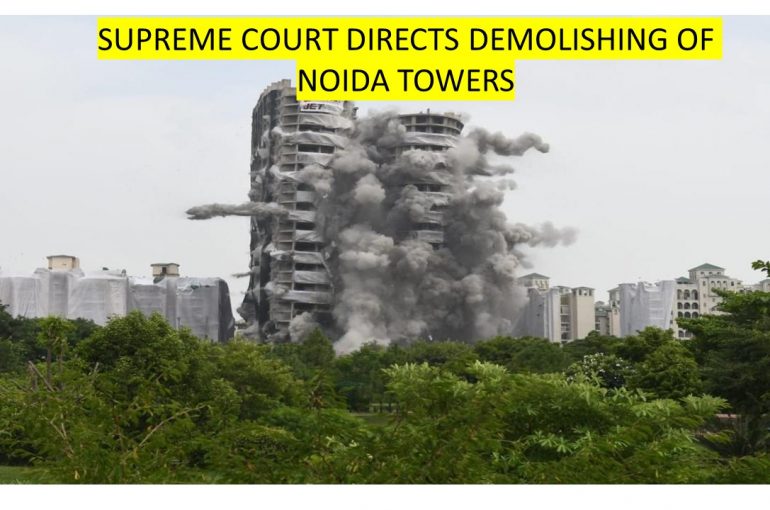 The Supreme Court of India came down heavily on Supertech Limited (Builder) that had illegally built the Twin Towers on the project called Emerald Court. The Judgement titled ‘Supertech Limited v. Emerald Court Owner Resident Welfare Association’ was decided on 31.08.2021 by a Division Bench of Justice Dr. Dhananjaya Chandrachud and Justice M.R. Shah.

Supertech Limited was the builder of the project called Emerald Court in Sector 93-A Noida. The Noida Authority had sanctioned a plot of land admeasuring 42,263 square meters on 23.11.2004 in Sector 93-A for development of a group housing society by the name of Emerald Group. The builder was given sanction for constructing 14 towers with 9 floors. Subsequently, the plan was revised to build 2 additional floors, thereby, making it 11 floors. Additionally, two Towers, T-16 and T-17 (Twin Towers) were also sanctioned, along with a shopping complex.

The construction plan for the Twin Towers were in violation of multiple regulations regarding construction. As per the building plan floated by Supertech during the initial phase, a green patch was supposed to be developed by Supertech as part of the project and land was earmarked for it near Tower 1. But, after the revision of plans in 2012, the same land was allocated for the construction of the Noida Twin Towers. Furthermore, the height of the Towers was also increased significantly from 24 floors to 40 floors. They kept changing the plans from time to time to bring in new developments and modifications.

In 19.03.2010, the UP Apartments Act 2010 came into force. Section 4(4) and Section 5 of this Act provide for the consent of the owners of flats before any change in the sanctioned plans is effected and also envisage that the percentage of undivided common interest of the owners of the flats cannot be changed without their consent. On 30.11.2010, the New Okhla Industrial Development Area Building Regulations 2010 came into force. Regulation 24.2.1.(6) contains the following stipulations:

Distance between two adjacent building blocks shall be minimum 6 mtrs. to 16 mtrs, depending on the height of blocks. For building height up to 18 mts., the spacing shall be increased by 1 metre for every addition of 3 mtrs. as per National Building Code 2005. If the blocks have dead-end sides facing each other, than the spacing shall be maximum 9 mtrs. instead of 16 mtrs. Moreover, the allottee may provide or propose more than 16 mtrs space between two blocks.”

The Resident Welfare Association of the Emerald Court (Respondent), which was a group of residents of the Emerald project, filed a Writ Petition before the High Court of Allahabad on 10.12.2012. It was alleged by the Respondents that the UP Apartment Owners Act, 2010 was breached during the construction of the towers. The residents claimed that the two towers had less than 16 metres of distance between them which was in violation of the the New Okhla Industrial Development Area Building Regulations 2010.

The Supertech-Appellant contended that T-16 and T-17 were sanctioned on 26.11.2009, and hence the requirement of prior consent did not arise, since the UP Apartment Owners Act was not in force then. The High Court of Allahabad in April, 2014 ordered in favor of the Respondents and directed Supertech to demolish the towers at its own expense.

The Appellants, aggrieved by this Judgement of the Allahabad High Court filed a Special Leave Petition (SLP) before the Supreme Court. On 05.05.2014, the Supreme Court directed the maintenance of status quo in respect of T-16 and T-17, directing that neither the builder nor the purchaser shall alienate the property or create third party rights.

The Apex Court vide Judgement dated 31.08.2021, upheld the High Court verdict ordering the demolition of the illegal twin towers. The Supreme Court, in its final order, stated that the Noida Authority and Supertech had engaged in “nefarious complicity” and ordered the builder to bear the cost of demolition of the buildings. The Apex Court has said that the date of demolition may be confirmed as 28.08.2022, with a “bandwidth of seven days” between 29.08.2022 to 04.09.2022, to take into account any marginal delay on account of technical reasons or weather conditions.

The Appellant filed a Review Petition before the Apex Court to modify its Judgement dated 31.08.2021, stating that demolition of entire buildings would not be needed to remove illegality on the issue of maintaining minimum distance between building and encroachment of green area. However this Review Petition was rejected by the Supreme Court on 04.10.2021.

Thus on 28.08.2022, the Twin Towers were demolished to grounds in accordance with the Order of the Supreme Court.

The Supreme Court by ordering the demolition of the Twin Towers has sent very strong signals to the builder lobby that they cannot willfully and knowingly flout the laws and bye-laws with impunity and expect the authorities to look the other way. Till date the builder lobby has always showed it’s supremacy over the buyers, by forcing buyers to sign on unfair contract terms, taking advance payments and not delivering possession of the flats and using all types of unfair trade practices to subdue and harass the buyer. Even though the Real Estate Regulatory Authority (RERA) Act, 2016 favors the buyer, the builder lobby even after losing a case before the RERA Authority, ensures delay in giving possession or refund by going into appeal after appeal and eventually losing the appeal. Hence the Supertech Judgement comes as a big relief to all buyers that there is hope despite the corruption and mismanagement of the builder lobby.