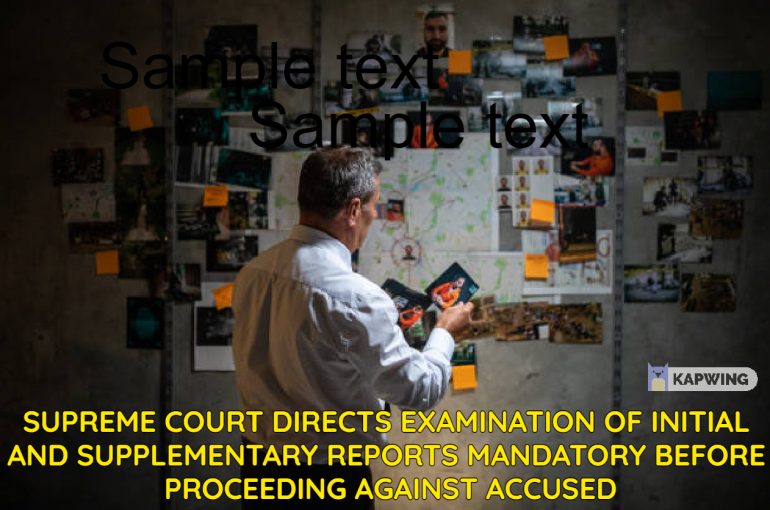 In a recent Criminal Appeal, the Apex Court in – ‘Luckose Zachariah vs Joseph Joseph’ (Criminal Appeal No 256 of 2022) Order dated 03.03.2021 reversed the Kerala High Court Judgement and held that it is imperative that the Court must examine initial and supplementary reports before proceeding against the Accused.

The facts are that  F.I.R 205 of 2016 was registered before the Police Station in Alappuzha North, dated 03.02.2016 against the Appellants for an alleged commission of offences under Sections 294 (b), 323 and 324 read with Section 34 of the Indian Penal Code (IPC), 1806. After conducting the due investigation the Sub- Inspector on 26.09.2016 , submitted a report under Section 173 (2), of the Code of Criminal Procedure (CrPC), 1973 implicating all the Appellants in the commission of the alleged offences.

Aggrieved by the Report, the First Appellant (Luckose Zachariah) moved a Complaint before the Superintendent of Police (SP) and Inspector General of Police (IGP) complaining of false registration of the case and prayed for further investigation in the aforesaid matter. On 21.02.2017, the Deputy Superintendent of Police (Administration) Alappuzha submitted a report, thereby recording that there were serious flaws in the earlier Investigation.

Subsequently on 06.12.2017, Deputy SP Crime Branch submitted a Supplementary Report before the Court of Judicial Magistrate of First Class- 1 (JFCM), Alappuzha. The Report recommended that the proceedings against the Appellants be dropped as no offence has been established during the course of the further investigation.

The Respondent (Joseph Joseph) filed a Protest Petition. On 30.05.2018, the Magistrate accepted the Final Report (FR), observing that the Protest Petition lodged by the Complainant has been dismissed for non-prosecution.

Aggrieved by the Order of Sessions Judge, the Appellants moved the Hon’ble High Court under Section 482 of Code of Criminal Procedure. The Hon’ble High Court of Kerala vide its impugned Judgement dated 03.03.2021 dismissed the Petition while observing that, there was no scope for filing of a Protest Petition against a Report under Section 173(2) or Section 173(8) of CrPC and that the Protest Petition and its dismissal for non-prosecution does not have any legal impact.

Referring to the Landmark Judgement passed by the Hon’ble Supreme Court of India titled ’Vinay Tyagi vs Irshad Ali (2013) 5 SCC 762’, the High Court observed that the positive and the negative reports submitted under Sub-Sections (2) and (8) of Section 173 CrPC respectively must be read conjointly to determine if there is a prima facie ground for believing that Accused has committed the offense or not.

Aggrieved by the impugned Judgement passed by the Hon’ble High Court, the Appellants approached the Hon’ble Supreme Court of India by way of SLP (Crl) No. 9556 of 2021.

The Court then referred to Vinay Tyagi vs Irshad Ali (2013 5 SCC 762) wherein it was held that, a further investigation conducted under the orders of the Court or by the Police on its own accord would lead to filing of a Supplementary Report. The Court also observed that Supplementary Report should be dealt ‘as a part of Primary Report’ in view of the provisions of Section 173 (3) and (6) CrPC.

The Hon’ble Supreme Court also relied on the Judgement passed by a three-judge Bench in Vinubhai Haribhai Malaviya vs State of Gujarat (2019) 17 SCC 1  and  held the Magistrate was under a duty to consider both the Reports before determining the steps that have to be taken further in accordance with law.

The Supreme Court vide its impugned Order dated 18.02.2022, directed that, the Court of Judicial Magistrate of First Class- 1 (JFCM), Alappuzha shall re-examine both the Reports. The Magistrate  was also directed to give a decision expeditiously within a period of one month from the date of the present order.

In this Judgment has upheld the significance of considering all reports be it preliminary or final before proceeding against the accused. This is probably as in Criminal Law it is mandatory that any one accused of a crime must be given the benefit of doubt and can only be deemed to be an accused if, the prosecution is able to prove the case “beyond reasonable doubt”.