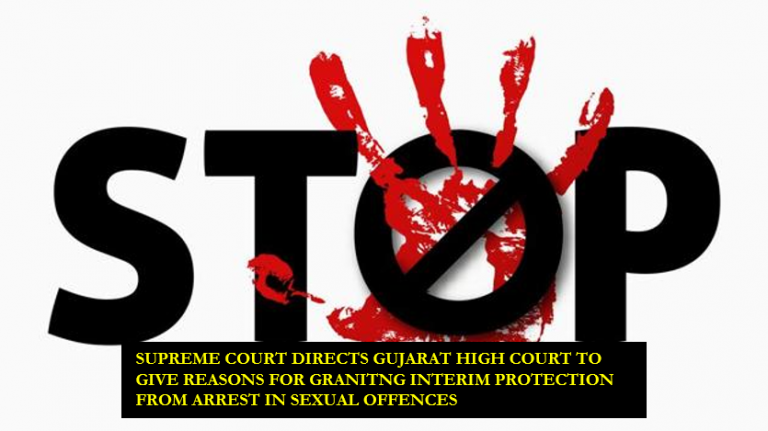 The Two Judge Bench of the Hon’ble #SupremeCourt comprising of Justices B R Gavai and Krishna Murari passed an Order dated 01-06-2021 in the case of Sorathia Bindi v. State of Gujarat {2021 SCC OnLine SC 419} and observed that reasons have to be cited in order to grant #interimprotection from #arrest in #sexualoffence cases.

In the present case, the Petitioner lodged a First Information Report (FIR) against the Respondent No. 2 for various sexual offences including rape under the Indian Penal Code, 1860 (IPC) and Sections 66(E) and 67(A) of the Information Technology Act, 2000 (IT Act) which pertain to punishment for violation of right to privacy and punishment for publishing material containing sexually explicit acts, etc respectively. Consequently, the Respondent No. 2 applied for anticipatory bail before the Gujarat High Court. The Single Judge Bench of the High Court passed an Order dated 16-03-2021 and issued a notice on the said Application for Anticipatory Bail and directed that the Applicant shall not be arrested in the meanwhile.

Aggrieved by the said Order of the High Court dated 16-03-2021, the Petitioner filed a Special Leave Petition before the Supreme Court. However, the Apex Court, vide Order dated 01-06-2021, remitted the matter to the High Court and directed the High Court to hear both the parties and then record the reasons for grant or rejection of anticipatory bail.

The Supreme Court further made the following observations in this case:

“In such serious matter, when the High Court exercised its power of granting ad interim protection from arrest to the respondent no.2 herein, the least that is expected by the High Court is to record some reasons as to why it chooses to exercise its extra-ordinary jurisdiction. From the perusal of the impugned order, it could clearly be seen, that no reason even for namesake has been recorded in the impugned order.”

The Apex Court concluded the proceedings with the aforesaid observations.