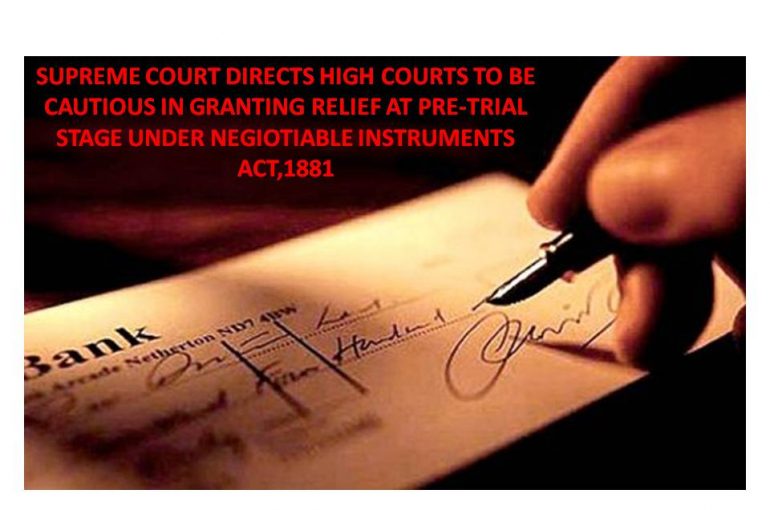 In recent two Criminal Appeals, a two Judge Bench of the Supreme Court comprising of Justice K.M. Joseph and Justice Hrishikesh Roy passed an Order and Judgement dated 26.04.2022 in ‘Rathish Babu Unnikrishnan vs. The State (Govt. of NCT of Delhi) & Anr’ (Criminal Appeals No. 694-695 of 2022) and  upheld the Order dated 02.08.2019 passed by the High Court of Delhi (Impugned Order) and held that High Courts should be very cautious in granting the relief of quashing of complaints under Section 138 of the Negotiable Instruments Act, 1881 (N.I Act) at a pre-trial stage.

Feeing dissatisfied and aggrieved by the Orders of the Trial Court dated 01.06.2018 and 03.11.2018, the Appellant filed Criminal Miscellaneous Appeals (Cr. M.C) No. 414 of 2019 and 1754 of 2019 under Section 482 (Saving of inherent powers of High Court) of Code of Criminal Procedure, 1973 (CrPC) before the Hon’ble High Court of Delhi praying for setting aside of Orders dated 01.06.2018 and 03.11.2018. The Counsel for the Appellant raised the contentions that, without satisfying the essential ingredients for offence under Section 138 N.I Act to the effect that the dishonoured cheque received by the Respondent is against ‘legally enforceable debt or liability’, the criminal process could not have been issued. On account of which the Appellant cannot be prosecuted for the offence under the said provision. The Counsel for the Appellant also added that the concerned post dated cheques issued in the favour of the Respondent, were security cheques for buyback of shares of AAT Academy (Appellant’s Company) from the Respondent.

The Counsel for the Respondent stated that, the Appellant has already admitted to the extent that the cheques were issued by him and the signature on the same belonged to him. The Counsel for the Respondent further added that as per Section 118 of N.I Act (Presumptions as to negotiable instruments), it is obligatory for the Court to raise the legal presumption against the accused if the cheque is dishonoured on presentation. It was specifically contended by the Respondent, that in a share purchase transaction, the consideration is first paid to the seller as per the customary practice, and then only the formalities with respect to the share transfer is completed, as per Section 56 (1) of Companies Act, 2013 (Transfer and transmission of securities).

The High Court after considering all the contentions raised by both the parties, passed an Order dated 02.08.2019 dismissing the Petition preferred by the Appellant for Quashing of Proceedings under Section 482 CrPC, on the ground that it would otherwise negate the Respondent’s case as it would not give him an opportunity to lead the evidence.

Feeling aggrieved by the Impugned Order dated 02.08.2019 passed by the High Court, the Appellant preferred the present Criminal Appeals before the Supreme Court. After considering all due contentions and averments, the Apex Court came to a conclusion that the legal presumption of the cheque having been issued in the discharge of liability must also receive due weightage. In a situation where the accused moves Court for quashing even before trial has commenced, the Court’s approach should be careful enough to not to prematurely extinguish the case by disregarding the legal presumption which supports the complaint.

The Supreme Court further observed that where there exists legal presumption, it would not be judicious for the quashing court to carry out the detailed enquiry of the facts alleged, without giving a fair chance to the first court (Trial Court) to evaluate the evidences placed on record by the parties. The quashing Court should not take upon itself, the burden of separating the wheat from the chaff where facts are contested.

The Apex Court concluded its observation and held that in the present case since the Appellant-Accused has not disputed the cheques and the signatures, the balance of convenience at this stage lies in the favour of the Respondent-Complainant. Based on the prima facie impression, an element of criminality cannot be entirely ruled out here, subject to determination by the Trial Court. Thus the Supreme Court held that the Impugned Order dated 02.08.2019 of the High Court has been correctly passed by applying proper legal principles and that the High Court has rightly declined the relief to the Appellant-Accused. Hence, the present Appeals have been dismissed.