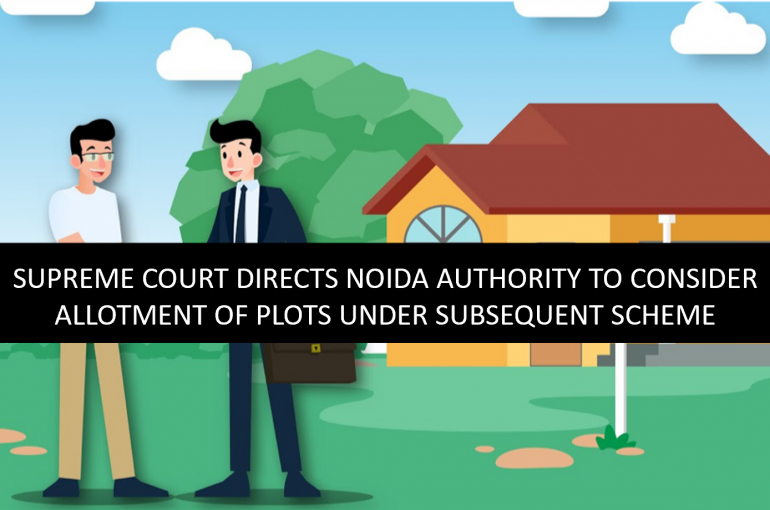 A Three Judge Bench of the Hon’ble Supreme Court of India comprising of Justice Uday Umesh Lalit, Justice S. Ravindra Bhat and Justice Pamidighantam Sri Narasimha in the matter of Ritu Maheshwari vs. M/S Promotional Club Civil Appeal No. 3616-3618 of 2022, passed a Judgment dated 05th May,2022 and decided upon the issue of allotment of plots by Noida Authority under a subsequent scheme introduced after the Respondent/Club applied for registration.

The Noida Authority, the Appellant herein ( Noida) published a scheme in 2010 (hereafter “the Old Scheme) for allotment of industrial plots larger than 2000 sq. meters in Phases II and III of its industrial area. In Phase II, the indicative price for plots upto 4000 sq. metre was Rs. 5550/sq. metre, and in Phase III, it was Rs.5750 /sq. metre. A processing fee of Rs. 20,000/- and registration money of Rs. 8 Lakhs for Phase II plots and Rs. 10 Lakhs for Phase III plots were required from the applicants and allotment was to be based on interviews of registered applicants by a screening committee.

The M/S Promotional Club (Club) applied to the Noida Authority for two plots. In its meeting on July 5, 2012, Noida apparently decided to terminate the Old Scheme based on its assessment of its feasibility. On July 12, 2012, this decision was made public and made available to all parties involved, including the Club. Following that, Noida sought to have the Club’s deposit returned to it.

The Club was aggrieved and filed a Writ Petition before the Allahabad High Court, claiming that, according to its information, Noida received 95 applications, 65 of which were rejected, and 15 allotments were made. The Club claimed that it had met all of the Old Scheme’s requirements, including payment of the processing fee and registration fee, as well as submission of all required documents. The Club claimed that Noida ignored the terms and conditions of its allotment Scheme, and that the non-consideration was arbitrary. The Club claiming several other directions, including one, to cancel all existing allotments and another, to consider the Petitioner Club’s Application for Allotment.

Noida had resisted the Petition, arguing that once the Old Scheme was discontinued, the Club had no basis to claim allotment even if some plots were still available. It was also urged that the Club was aware of the same. On November 9, 2013, the Club applied under a Scheme ( 2013 Scheme) while a Writ Petition before the High Court was pending. On July 17, 2014, Noida allotted a plot of 4000 sq. meter at Rs. 8060 per sq. ft. The Club had deposited Rs. 1,91,83,700/- towards this Allotment, and it requested a change in the Allotment to M/s. Maria Exim Pvt. Ltd. The High Court was not informed of the subsequent allotment of a plot under the 2013 Scheme.

The High Court vide its first Impugned Judgement dated 31-07-2019 held that Noida’s failure to call the Club’s representative for an interview was unjustified. The High Court directed that the Club had to re-deposit the registration amount of Rs. 8 Lakhs each in respect of its two applications with Noida within a month, and the applications were to be revived upon deposit of such registration amount.

Noida had filed an Application for Clarification bearing Civil Misc. Modification/Clarification Application No. 17/ 2020 before the High Court contending that no plots were available under the Old Scheme and that the 27 plots that were available under the Old Scheme were later allotted. The Application  was dismissed on 01.10.2020, and Noida preferred a review proceeding. The High Court by its second Impugned Order dated 13.04.2021 rejected the Review Petition.

The Club filed a Contempt Complaint before the High Court alleging non-compliance of  the Original Judgement dated 31-07-2019 by the Noida Authority. Notice was issued in the contempt proceedings, and the High Court recorded on 12.02.2020 that the Club’s Application was deemed eligible and was taken on record.

Counsel  for the Noida Authority argued that the Impugned Judgement dated 31.07.2019 was based on a false factual statement made by a NOIDA Officer on Special Duty (OSD) in his Affidavit dated 10.03.2019 to the effect that eight plots remained unallotted in the Old Scheme, which statement caused grave prejudice to NOIDA. When a scheme is discontinued, the land available with Noida is never set aside and is instead used in other, newer schemes, according to counsel. It was argued that the Club did not object to the Scheme’s closure in 2009-2010. It rather claimed that  Noida acted arbitrarily in not calling its representative for an interview and possible allotment. In fact, all registrants were aware that, under the terms of the Scheme, Noida could cancel it at any time and refund the funds received.

The only way to reasonably comply with the directions was to consider the applications under the 2013 scheme, since the cancellation or closure of the Old Scheme was not adversely commented. No applicant can expect to be selected based on an interview under the subsequent 2020 Scheme. The results of the lotteries are used to assign plots. The Club was taken into consideration but was unsuccessful in the draw of lots.

The Club’s learned Senior Counsel argued that the Impugned Judgment, as well as the High Court in Review Judgment, should not be disturbed. It was argued that Noida did not provide any reason for the Scheme’s closure; Noida’s Affidavit before the High Court did not explain why the Club’s Application was overlooked or why its representative was not called for an interview as other applicants were. Thus the Club’s Application should be processed and evaluated under the old system.

1) That the terms of the Old Scheme stipulated that rates of the plot as indicated by the Noida Authority and the area of the plot could be varied. The relevant clause 2 (i) is reproduced below for easy reference :

“This scheme is an open-ended scheme. However, NOIDA reserves the right to close the scheme at any point of time without any notice and without assigning any reasons.”

2) That an applicant or registrant of a scheme has no right to insist that they should be provided allotment under a scheme and much depends on the scheme’s terms.

In the light of the above position in law, it is clear that the club could not have claimed that its application had to be dealt with in terms of the old scheme, which had ended in 2012. The direction of the High Court, could only have meant that the applications had to be revived, and dealt with the scheme prevailing as on the date of its consideration, i.e. after 31.07.2019. The interpretation placed by the High Court, that there were existing plots, which could have been dealt with under the old scheme is entirely misplaced. In such events, given that the legality of closure of the old scheme attained finality, there was no question of any land or plot being attached or belonging as it were to an old scheme.

Furthermore, whether the grievance was justified and well founded, given that state agencies develop and allot such industrial units at prices which are reasonable, and that an applicant subsequently succeeded in securing a plot, are relevant facts, which a court should be appraised of. The failure by the club, to do so, in this court’s opinion, disentitled it to any relief.

Thus, the Hon’ble Supreme Court held that Noida’s Appeals are allowed and the Impugned Judgment and Orders 31-07-2019 and 28-08-2020 of the High Court are hereby set aside.