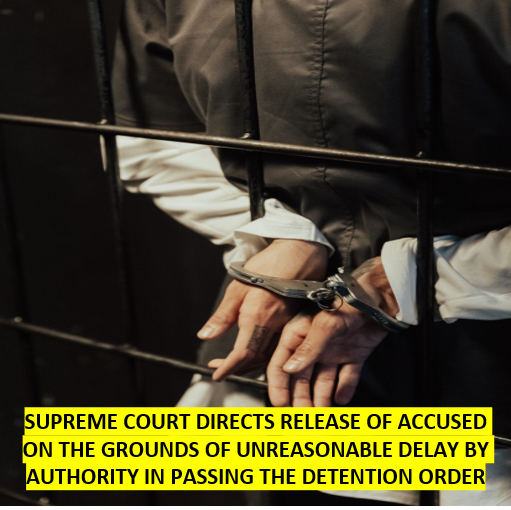 Accentuating that “Preventive Detention is a serious invasion of personal liberty”, a 3 Judge Bench of Supreme Court comprising of Chief Justice of India U. U. Lalit, Justice Ravindra Bhat and Justice J B Pardiwala, passed a Judgment dated 30.09.2022 in the case titled as Sushanta Kumar Banik v. State of Tripura & Ors. in Criminal Appeal No. 1708 Of 2022 and ruled that an unreasonable and unexplained delay in passing the order of detention can vitiate the Detention Order and that there should be “live and proximate link” between the grounds of detention and the purpose of detention.

In the present case, the Secretary (Home Department), Government of Tripura, pursuant to the Proposal dated 14.07.2021 forwarded by the Director General of Police, passed an Order of Preventive Detention against Shri Sushanta Kumar Banik (Appellant) dated 12.11.2021 under Section 3(1) of the Prevention of Illicit Traffic in Narcotic Drugs and Psychotropic Substances Act, 1988 (PIT NDPS Act) (Power to make orders detaining certain persons) on the following grounds:

(i) He was charge sheeted in Amtali PS Case No.2019/AMT/208 dated 05.11.2019 under Section 22(b), 22(c) and 29 of Narcotic Drugs and Psychotropic Substances Act, 1985 (NDPS Act), which was registered following seizure of 92 gm brown sugar (Heroin) and 7600 nos yaba tablets. Investigation of the case has revealed that he was involved in running illegal business of narcotic drugs throughout the State and outside the State.

(iii) He has association with the smugglers of NDPS articles and illicit drug traffickers in connection with the two aforesaid cases. He is a kingpin in illegal trafficking of narcotic drugs inside the State as well as outside the State. Apart from this, he did not stop his illegal activities of narcotic drugs and psychotropic substances even after his arrest in the aforesaid cases.

(iv) He is habitual in smuggling banned NDPS articles. By selling such NDPS articles he is spoiling the future of youths in our society and making them drug addicts. It is a social crime. Therefore, his detention under PIT NDPS Act is required for eradication of the menace of drugs.

Pursuant to the Order dated 12.11.2021, he was detained on 19.11.2021 under Section 3(1) of the PIS NDPS Act. The State Government referred the matter to the State Advisory Board (Board) constituted under Section 9(a) of the NDPS Act which sustained the Detention Order on the ground that he was involved in consistent and continuous criminal activities and thereby he has kept the society around him under threat. Also, despite the fact that the Appellant was given intimation of his right to representation, he did not submit his representation against the said Order. The State Government vide Order dated 28.01.2022 confirmed the Order of the Board.

Aggrieved by the aforesaid Order of the State Government dated 28.01.2022, a Writ Petition (Civil) No. 6 of 2021 in the nature of Habeas Corpus was subsequently filed by the Petitioner-Appellant (Detenue) before the High Court of Tripura at Agartala (High Court), challenging the legality and validity of the Detention Order passed by the State government and seeking his release from detention.

Ms. Madhumita Banerjee, Learned Counsel of the Petitioner-Appellant contended that in the given case the Detenue was not even informed that he has a right to make representation to the Detaining Authority. At no stage he was afforded with an opportunity to make a representation against the Detention Order. Further, the Petitioner-Appellant was never served with a copy of the Proposal of the Director General of Police on the basis of which said Detention Order was issued against him which renders the Order of Detention invalid and illegal. The Counsel further contended that the Detaining Authority at no stage followed the safeguards under Article 22(4) and (5) of the Constitution (Protection against arrest and detention in certain cases), hence the Order is liable to be set aside and quashed.

The High Court vide Impugned Order dated 01.06.2022 dismissed the Writ Petition by observing that the Constitutional safeguards provided under Article 22(5) of the Constitution has been observed by the Detaining Authority by indicating to the Detenue the grounds of his detention and providing him full opportunities of making an effective representation against the Order of Detention. It further stated that unless he can show how he was prejudiced by non-supply of a particular document, he could not gain any benefit merely by agitating that a document mentioned in the Detention Order was not supplied to him.

The Supreme Court made the following observations:

The Apex Court, therefore, vide Judgment dated 30.09.2022 allowed the Appeal filed by the Appellant by setting aside the Impugned Judgment and Order of the High Court dated 01.06.2022 and ordered to release the Appellant forthwith from the police custody.