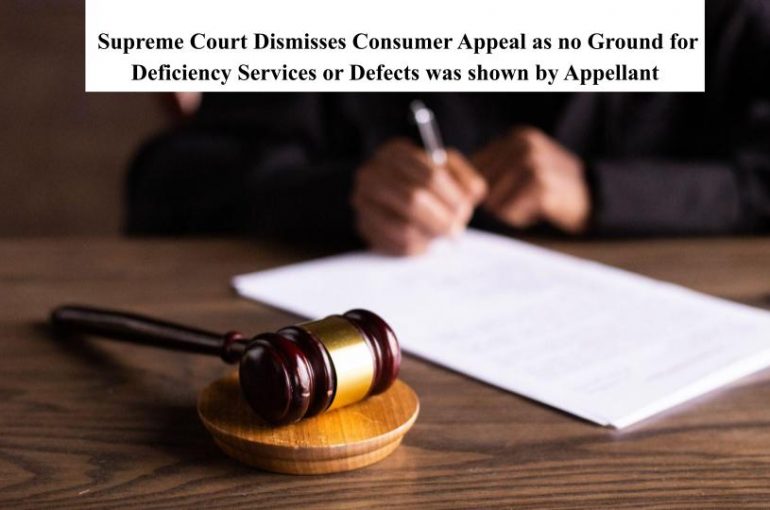 A two Judge Bench of the Supreme Court comprising of Justice Abhay S. Oka and Justice Surya Kant, in the matter of Sudha & Ors. vs.  Jaiprakash Associates Limited Civil Appeal No. 6439 of 2021 passed a Judgment dated 16-09-2022. The said Judgment dealt with definitions of ‘defect’ and ‘deficiency’ in Sections 2 (f) and (g) of the Consumer Protection Act, 1986.

On 27.01.2013, the Complainant No. 3 Sh. Naren Nath Sarvaria booked a two bedroom flat in the Project i.e. Garden Isles (Project) of Respondent Company.  As mentioned in the Complaint, the Project got extra-ordinarily delayed without any reasonable cause. On January 2015, when the Complainant visited the office of the Respondent, the Executive suggested canceling the present booking and booking an apartment in Imperial Court- Tower 1 in the Project known as Jaypee Greens Noida. The Executive also said the amount of consideration paid by the Appellant in booking the earlier flat can be adjusted towards the consideration of a flat in Jaypee Greens. It must be noted that Flats in Jaypee Greens were much more expensive. The Complainant accepted the advice of executive and proceeded with the same. Accordingly, an Allotment Letter was issued by the Respondent Company dated 11.07.2015 and the Respondent promised to hand over the possession within 24 months from the date of the Allotment Letter.

The consideration amount for the above-mentioned transaction was Rs. 2,77,91,313 (Rupees Two Crore Seventy Seven Lakhs Ninety-One Thousand Three Hundred and Thirteen only) for which the Complainant had to take a loan from ICICI Bank (hereinafter referred as ‘Bank’). Apart from other documents, the Bank also executed a Quadripartite Agreement (Agreement between four parties namely the Complainant, Respondent Company, Bank, and Jaypee Infra-tech Limited) dated 9.12.2016. The loan amount was to be disbursed directly towards the consideration payable in respect of the said Apartment by the Bank to the Respondent Company.

The Respondent Company pressurized the Complainant to get the flat registered, subscribe to social club membership, and pay maintenance costs for one year. The Complainant half-heartedly complied with all such requirements. However, despite making full payment for the Apartment, the Respondent Company did not hand over the said Apartment. On 21.09.2017 the Complainant filed a Consumer Complaint before National Consumer Dispute Redressal Commission, New Delhi (hereinafter referred to as ‘National Commission’).

The basis of said Complaint was that the Respondent has not provided the Apartment as per the Agreement and that there were several defects in the said Apartment. It was further contended that the Apartment is not as per the design and specifications in the Agreement and as such the Agreement, therefore, stands breached and deserves to be cancelled. Based on these contentions, the following prayers were made by the Complainant, i.e. (a) refund of full consideration, (b) compensation at the rate of 18% on the entire amount paid by the Complainants till the date of realizing of the refund (c) all losses that have been incurred like the cancellation fee of stamp paper, the late payment charges, legal expenses incurred, and mental harassment caused for misleading and defrauding the Complainant.

The Respondent Company defended itself by stating that immediately after obtaining the Completion Certificate dated 24.10.2016, the Complainant was called upon to complete pre-possession formalities and pay the remaining amount. The said entire consideration was not paid by the Complainant within 45 days of the receipt of the Letter dated 24.10.2016. Clause 9 of the general terms and conditions of the Allotment Letter which was signed and executed by the Complainant clearly states that the right to claim a refund will only exist if the possession was not handed over within three months from completion of the period of 24 months from the date of Allotment Letter. However, it must be noted that the Complainant is seeking a refund even before the expiry of the said grace period of three months.

The Respondent Company in their Reply pointed out non-compliance by the Appellant with the Interim Order which was issued by National Commission on 17.10.2017. Clause 9.5(a) of the Agreement enables the allottee to have a refund of the deposited amount only if the Respondent Company fails to deliver possession of the said Apartment within 27 weeks from the date of the Allotment Letter. The Respondent stated that it must be noted that the Complaint was filed by Complainant before the above-mentioned period in the National Commission.

The main question before the Supreme Court is whether there was any deficiency in the services rendered by the Respondent Company. For this, the Apex Court referred to Section 2 Clause (f) and (g) of the Consumer Protection Act, 1986 and held that there is absence of fault, shortcoming, or inadequacy in quality, nature, and manner of the performance on the terms and conditions on which allotment of the said Apartment was offered to the Appellants. With this observation, the Apex Court held there no merit in the said Appeal and hence, the same was dismissed.