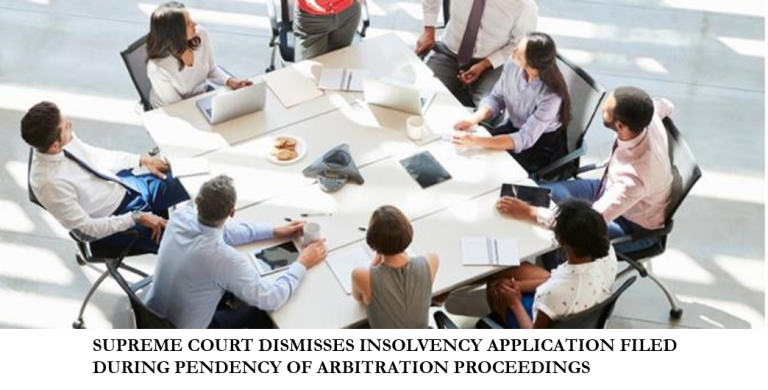 The 3 Judge Bench of the #SupremeCourt has recently passed a Judgment dated 26-03-2021 in Indus Biotech Private Limited vs Kotak India Venture and Others, where the Apex Court decided upon the issue that whether during the pendency of #arbitration proceedings, a petition under Section 7 of the Insolvency and Bankruptcy Code 2016 (#IBC) is maintainable.

In this case, Kotak India Venture, a Mauritius Company, and its sister ventures (Respondents) subscribed to the Equity Shares and Optionally Convertible Redeemable Preference Shares (Shares) in the Petitioner Company, Indus Biotech Pvt. Ltd (Petitioner) by executing Share Subscription and Shareholders’ Agreements dated 20-07-2007, 12-07-2007, 09-01-2008 and various Supplemental Agreements dated 22-03-2013 and 19-07-2017 [Agreement(s)]. Thereafter, disputes arose between the Petitioner and the Respondents regarding the proportion of paid up share capital that the Respondents would receive upon conversion of Optionally Convertible Redeemable Preference Shares into Equity Shares. Hence, the Petitioner and the Respondents (Parties) resorted to international arbitration to resolve their disputes.

Meanwhile, the Respondents filed an Application under Section 7 IBC before the National Company Law Tribunal, Mumbai Bench (NCLT) to initiate corporate insolvency resolution process (CIRP) against the Petitioner on the ground that the Petitioner has not paid the Respondents the amount of Rs. 3,67,08,56,503/­- due and payable upon redemption of Optionally Convertible Redeemable Preference Shares. On the other hand, the Petitioner contended that until an amicable decision is taken in this regard, the debt/default or the liability to pay the said amount does not arise.

The NCLT passed an Order dated 09-06-2020 and dismissed the Section 7 Application and allowed the Application filed by the Petitioner under Section 8 of the Arbitration and Conciliation Act 1996 (Arbitration Act) seeking directions from NCLT to refer parties to arbitration, as Parties had agreed to resolve disputes through arbitration under the said Agreements.

Aggrieved by the NCLT Order dated 09-06-2020, the Respondents filed a Special Leave Petition before the Supreme Court, as a separate Petition filed by the Petitioner under Section 11 of the Arbitration Act was already pending before the Apex Court, where the Petitioner sought for appointment of arbitrator to adjudicate upon the disputes that arose between the Parties.

The Supreme Court passed a Common Judgment dated 26-03-2021 in both the Petitions and made the following observations in this case:

1- That the Parties have agreed to resolve their disputes arising from the Agreements through arbitration.

2- That the Respondents should have availed their alternate remedy of filing an appeal before the National Company Law Appellate Tribunal (NCLAT) under Section 61 IBC. However, the Apex Court decided to hear the said Appeal in the special circumstance that the Arbitration Petition filed by the Petitioner was already pending before the Court and the Court decided to hear both the matters.

3- That in order to initiate CIRP under Section 7 IBC, the following criteria must be met:

4- That a dispute becomes non-arbitrable, when CIRP is initiated and it becomes a proceeding in rem. But in this case, the NCLT had not determined the existence of default and has not admitted the Section 7 Petition yet, and thus CIRP is not deemed to have been initiated.

5- Further, the discussion between the Parties regarding the percentage of paid up share capital payable to Respondents has not yet concluded. So merely by filing Section 7 Petition and making a claim against the Petitioner, does not prove the existence of default and thus, does not deem to have initiated CIRP proceedings in rem. Hence, on the aforesaid grounds, the dispute cannot be held non-arbitrable at this stage.

6- Therefore, the Application under Section 8 of the Arbitration Act is maintainable, as it has been filed before the NCLT passed any order for admission of CIRP.

Therefore, based on the aforesaid grounds, the Supreme Court upheld the NCLT Order dated 09-06-2020, and allowed the Arbitration Petition filed by the Petitioner and dismissed the Appeal filed by the Respondents. The Apex Court further constituted the Arbitral Tribunal to adjudicate the disputes between the Parties.