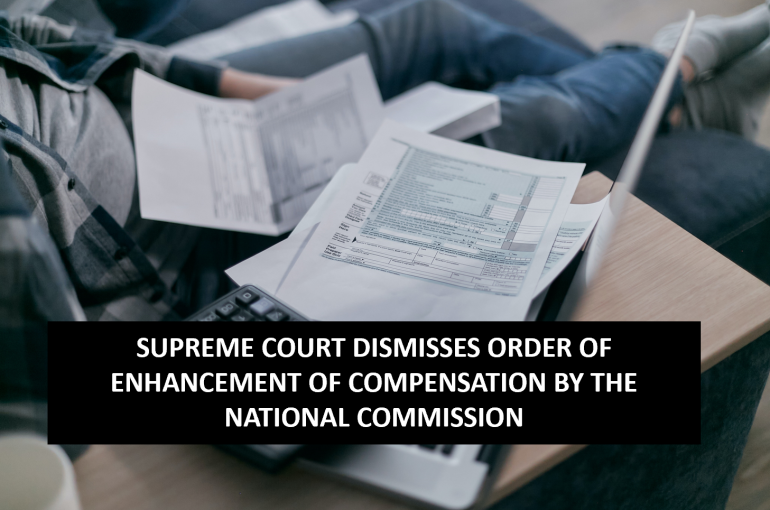 A two-Judge Bench of the Hon’ble Supreme Court of India comprising of Justice M.R. Shah and Krishna Murari passed a Judgment dated 09-09-2022 in Chandigarh Nursing Home and Anr. v. Sukhdeep Kaur (CIVIL APPEAL NO. 5931 OF 2022) and dismissed the Order of the National Consumer Disputes Redressal Commission (National Commission) that increased the amount of compensation without any prayer sought by the Complainant in that regard.

A Minor (hereinafter referred to as “Original Complainant/Respondent“) through her father filed a Consumer Complaint before the District Consumer Forum alleging medical negligence against her Doctor (hereinafter referred to as “Appellant“). The contention made by the Original Complainant is based upon rashes that she developed on her body due to the wrong diagnosis and wrong treatment by the Appellant-Doctor. She also alleged that the said Doctor, who treated her, was an Ayurveda Doctor and was not competent to prescribe allopathic medicines and thus, it amounts to medical negligence.

The District Forum vide Order dated 11-03-2020 directed the Appellant-Doctor to pay the Original Complainant an amount of Rs. 1 Lakh along with interest @ 9% from the date of Order.

Aggrieved by the Order dated 11-03-2020 of the District Forum, the Doctor filed an Appeal before the State Consumer Disputes Redressal Commission, Punjab (hereinafter referred to as “State Commission”). The State Commission dismissed the appeal with a cost of Rs. 10,000/-. It is relevant to note here that the Complainant was satisfied with the compensation amount which was granted by the District Forum and that she did not seek enhancement of said amount in Appeal.

Aggrieved by the Judgment and Order dated 03-01-2022 of the National Commission, the Appellant preferred an appeal to the Supreme Court. The Apex Court passed a Judgment dated 09-09-2022 and made the following observations:

3) That as the Appellant-Doctor was not given an opportunity for hearing in this regard, the National Commission could have only dismissed the Revision Application without enhancing the compensation, which was not even sought by the Original Complainant.

Therefore, based on the aforesaid observations, the Supreme Court held the Judgment and Order dated 03-01-2022 of the National Commission as unsustainable. Further, to balance the rights of parties and to ensure proper delivery of justice, the Apex Court by exercising power under Article 142 of the Constitution of India, enhanced the compensation amount from Rs. 1 Lakh to Rs 4 Lakhs in consideration of the medical expenses that the Complainant had to incur. As a result, the Appeal was disposed off.