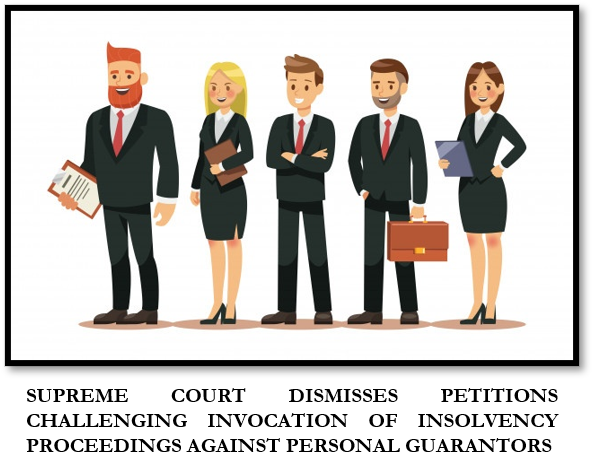 A two-Judge Bench of the #SupremeCourt comprising of J. L. Nageswara Rao and J. S. Ravindra Bhat, has in a recent case of Lalit Kumar Jain vs Union of India and Others Transferred Case (Civil) No. 245/2020 passed a #Judgment dated 21-05-2021 and upheld the #validity of the Impugned #Notification dated 15-11-2019 issued by the Ministry of Corporate Affairs (#MCA) under the Insolvency and Bankruptcy Code 2016 (#IBC), which brings into force, the provisions pertaining to #personalguarantors of #corporatedebtors.

For the convenience of the readers, the link to the said Notification dated 15-11-2019 is given below:

Meanwhile, during the pendency of such legal proceedings, the personal guarantors of such companies filed Writ Petitions under Article 32 of the Constitution of India 1950 before the Supreme Court (Petitioners) and thereby challenged the Impugned Notification dated 15-11-2019 for being ultra vires the provisions of IBC on the ground that it extends the provisions of Part III of IBC only to personal guarantors of corporate debtors and not to other individuals and partnership firms.

The Apex Court made the following observations with regard to the validity of the Impugned Notification in this case:

1) That the aim of IBC is to promote entrepreneurship, availability of credit and time-bound resolution of insolvency in case of corporate persons, partnership firms and individuals and to ensure balanced interests of all such stakeholders.

2) That various provisions under IBC have been brought into force on various dates to fulfil the objectives of IBC, having regard to priorities. For instance, the provisions related to setting up of regulatory bodies under IBC were notified at the earliest, i.e. on 05-08-2016, to enable the regulatory bodies to commence the task of examining relevant issues and evolve standards to be embodied in the rules and regulations. Eventually, various other provisions have been notified based on priorities and similarities and dissimilarities of subject matter.

4) That IBC has further distinguished and classified personal guarantors from other individuals on the following grounds:

i) An individual/personal guarantor of a corporate person would stand on a different footing vis-à-vis individuals and partners in a partnership firm because of their distinct economic considerations. Hence, they would require different treatment under law.

ii) Further, a personal guarantor’s assets would be relevant for the insolvency resolution process of the corporate debtor, as assets of the guarantor may be utilised to realise the creditors’ dues, etc. Hence, all matters affecting a corporate debtor’s insolvency process, have been clubbed together and brought before the same forum, i.e. NCLT, as opposed to DRT in the case of other individuals.

Therefore, based on the aforesaid grounds, the Supreme Court allowed the classification of personal guarantors of corporate debtors under IBC and upheld the validity of the Impugned Notification and thereby, dismissed the Writ Petitions.