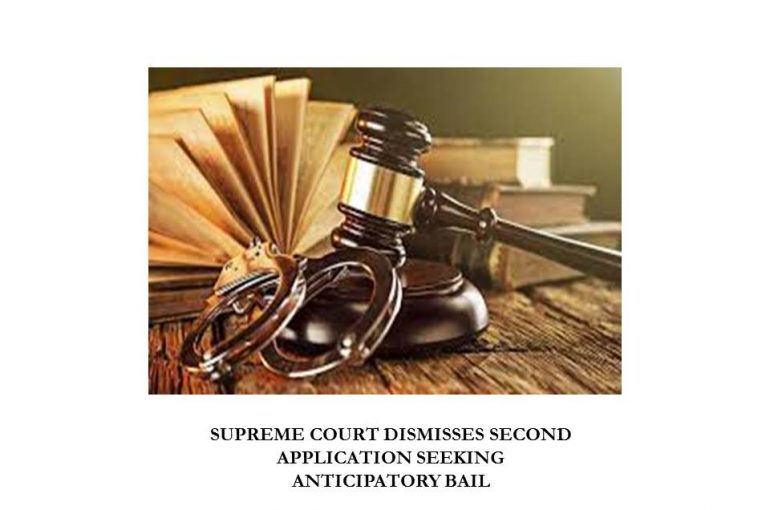 The Division Bench of the Hon’ble #SupremeCourt of India comprising of Justices Ajay Rastogi and AS Oka passed an Order dated 16-12-2021 in the case of Md. Shamim Khan v. The State of Jharkhand {Special Leave to Appeal (Crl.) No(s). 9449/2021} and held that filing a Second Application for #AnticipatoryBail under Section 438 of the Code of Criminal Procedure, 1973 (#CrPC) after the rejection of the First Application is not good in law.

In the instant case, the Petitioner herein was arrested in connection with a case instituted under Sections 279 (Rash driving or riding on a public way), 307 (Attempt to Murder), 308 (Attempt to commit culpable homicide), 511 (Punishment for attempting to commit offences punishable with imprisonment for life or other imprisonment), 427 (Mischief causing damage to the amount of fifty rupees), 353 (Assault or criminal force to deter public servant from discharge of his duty) of the Indian Penal Code (IPC), Section 12 of Prevention of Slaughter of Bovine Animals Act, 2005 and Section 11 of Prevention of Cruelty to Animals Act. Thereafter, the Petitioner had approached the High Court of Jharkhand (High Court) for grant of privileges of Anticipatory Bail.

The First Application filed by the Petitioner under Section 438 of the Cr.P.C for grant of Anticipatory Bail was rejected by the High Court, vide Order dated 10-11-2020. Subsequently, the Petitioner sought for a Pre-Arrest Bail and in connection thereto, moved a Second Application under Section 438 Cr.P.C which was also rejected by the High Court vide Impugned Order dated 02-08-2021.

Assailing the Impugned Order dated 02-08-2021, the Petitioner filed a Special Leave Petition (SLP) in the Hon’ble Supreme Court of India. The Apex Court after perusing the facts of the case and arguments advanced by the Parties, observed that there was no substantial change of circumstances placed on record while filing the Second Application. The Petitioner was unable to satisfactorily show any change of circumstances to invoke the jurisdiction of filing Second Application under Section 438 Cr.P.C.

Therefore, while dismissing the SLP, vide Order dated 16-12-2021, the Supreme Court observed that: