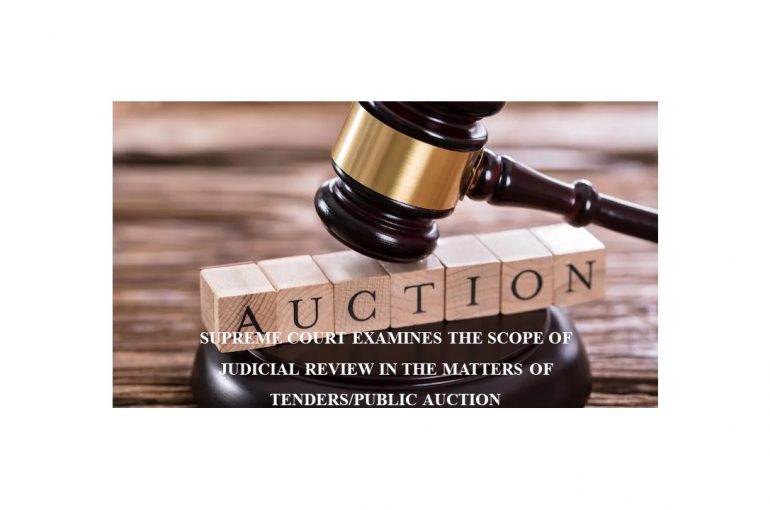 Judicial review of administrative action is intended to prevent arbitrariness, irrationality, unreasonableness, bias and mala fides. A two-judge bench of the Supreme Court, comprising of Justice Ajay Rastogi and Justice Abhay S. Oka, in the case of State of Punjab and others v. Mehar Din, on 02.03.2022, explored the scope of judicial review in the matters of tenders/public auction, in depth and held that Superior Courts should not interfere in the matters of tenders, unless substantial public interest is involved or the transaction is malafide.

The brief facts of this case that led to the dispute was that the sub-urban properties in Punjab were to be disposed of by public auction as per the Punjab Package Deal Properties (Disposal) 2 Rules, 1976 (the Rules, 1976). The Appellants, who were the custodian of the subject property, initiated the process of public auction by publishing a notice in a newspaper on 17.05.1993. The public auction was held on 04.06.1993, in which only three bidders participated and the bid of the Respondent being the highest bid was accepted. The Respondent then deposited 1/5 of the bid amount with the Competent Authority in accordance with the Rules, 1976. The Competent Authority, by Order dated 02.07.1993, cancelled the bid and ordered for re-auction, on the ground that the auction was not given proper and wide publicity. The Chief Sales Commissioner, on 24.10.1994, on an appeal preferred by the Respondent, confirmed the previous Order of 02.07.1993. This Order was further challenged by the Respondent before the Divisional Commissioner, who by an Order dated 17.09.2003, cancelled the Order of Chief Sales Commissioner on the ground that the Respondent was not given the proper opportunity to be heard. This Order was further challenged before the Financial Commissioner Revenue and the subject property was ordered to be put for re-auction.

The Respondent filed a Writ Petition before the High Court, against this Order. The High Court, on 13.08.2008, set aside the order of Financial Commissioner Revenue, stating that since there were no irregularities in the auction process, there is no reason to vitiate it. This Order was challenged before the Supreme Court.

The Hon’ble Supreme Court, after perusal of the Rules 1976, observed that as per the Rules, the public auction has to be given wide publicity to fetch the right price for the property and the acceptance of bid during the auction is provisional, subject to the confirmation by the Sales Commissioner. No right is accrued in the highest bidder till the confirmation letter is issued to him by the Competent Authority. The Apex Court observed “This Court has examined right of the highest bidder at public auctions in umpteen number of cases and it was repeatedly pointed out that the State or authority which can be held to be State within the meaning of Article 12 of the Constitution, is not bound to accept the highest tender of bid.”

The Supreme Court, then went on to examine the scope of Judicial Review in the matters of Tenders/ Public Auction. The Court referred to the judgement in case of Tata Cellular v. Union of India, (1994) 6 SCC 651 in which it was held that judicial review of government contracts is permissible in order to prevent arbitrariness or favouritism. The Court then referred to the recent judgement in the case of Silppi Constructions Contractors v. Union of India and another (2020) 16 SCC 489, in which it was held that, “The authority which floats the contract or tender, and has authored the tender documents is the best judge as to how the documents have to be interpreted. If two interpretations are possible then the interpretation of the author must be accepted. The courts will only interfere to prevent arbitrariness, irrationality, bias, mala fides or perversity.”

The Apex Court, after referring to a catena of judgements, observed that, “The law on the subject is settled that the Courts being the custodian of fundamental rights are under an obligation to interfere where there is arbitrariness, irrationality, unreasonableness, malafides and bias, if any, but at the same time, the Courts should exercise the power of judicial review with a lot of restraint, particularly in contractual and commercial matters.”

The Hon’ble Supreme Court held in para 26 of the judgement that “ This being a settled law that the highest bidder has no vested right to have the auction concluded in his favour and in the given circumstances under the limited scope of judicial review under Article 226 of the Constitution, the High Court was not supposed to interfere in the opinion of the executive who were dealing on the subject, unless the decision is totally arbitrary or unreasonable, and it was not open for the High Court to sit like a Court of Appeal over the decision of the competent authority and particularly in the matters where the authority competent of floating the tender is the best judge of its requirements, therefore, the interference otherwise has to be very minimal.”

The scope of judicial review is limited in the matters of tender/ public auction and is permissible only to prevent arbitrariness. The Supreme Court observed that the approach of the authority while dealing with the auction proceedings, was never the case of the Respondent at any stage and held that the recordings of the High Court to be unsustainable by law. Therefore, the Order of the High Court was set aside by the Apex Court.

While the Supreme Court of India has always upheld the rights of contracting parties and believes that the commercial wisdom of contracts is best left to the concerned contracting parties, it does interfere if the said contract is against public policy. Judicial review is a special power that courts have to examine the allotment of public contracts when the said allotment is arbitrary, irrational and biased. Courts have regularly interfered in public tenders and auctions when the same is deemed to be allotted with malafide intentions and will continue to do so in the larger public interest.