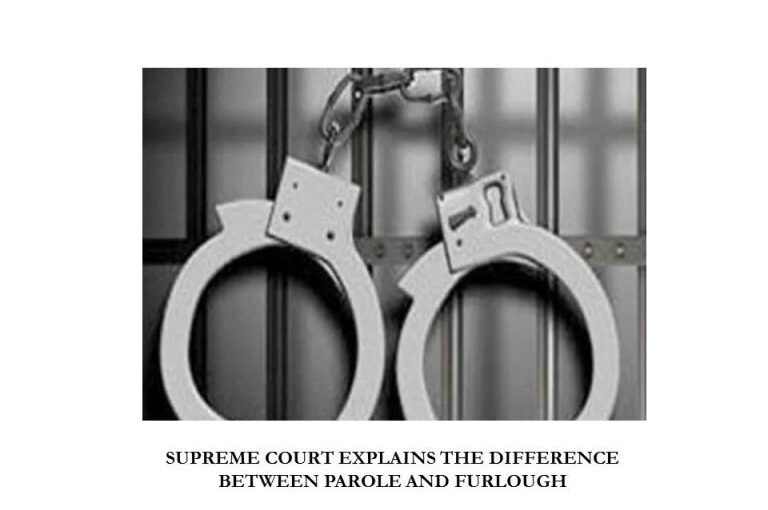 SUPREME COURT EXPLAINS THE DIFFERENCE BETWEEN PAROLE AND FURLOUGH

A Two Judge Bench of the Hon’ble #SupremeCourt of India comprising of Justices Dr Dhananjaya Y Chandrachud and B V Nagarathna passed a #Judgment dated 20-10-2021 in the case of State of Gujarat & Anr.v. Narayan @ Narayan Sai @ Mota Bhagwan Asaram @ Asumal Harpalani 2021 SCC Online SC 949 and held that the release of a #prisoner on #furlough is not a legal right.

The Supreme Court has explained the difference between #parole and #furlough as follows:

i) Furlough and parole envisage a short-term temporary release from custody;

ii) While parole is granted for the prisoner to meet a specific exigency, furlough may be granted after a stipulated number of years have been served without any reason;

iii) The grant of furlough is to break the monotony of imprisonment and to enable the convict to maintain continuity with family life and integration with society;

iv) Although furlough can be claimed without a reason, the prisoner does not have an absolute legal right to claim furlough;

v) The grant of furlough must be balanced against the public interest and can be refused to certain categories of prisoners.

On 17-03-2021, the Respondent filed an Application for furlough through the Surat Lajpore Central Jail. However, on 08-05-2021 the Director General of Police, Jail and Reformative Administration rejected the Application on the following grounds:

Aggrieved, the Respondent moved the High Court against the Order dated 08-05-2021 under Section 482 of the Criminal Procedure Code, 1973 (CrPC), for setting aside the said Order. The Respondent while relying upon the proviso to Rule 3(2) of Prisons (Bombay Furlough and Parole) Rules 1959 (Rules) made an averment that a Prisoner who has been sentenced to life imprisonment may be released on furlough every year instead of every two years, after he completes seven years of imprisonment. Further, it was also submitted that furlough leave is granted as a matter of right.

The Single Judge of the High Court vide Order dated 24-06-2021 allowed the Application of the Respondent thereby releasing the Respondent on furlough leave for a period of fourteen days from the date of his release on the execution of a personal bond of Rs. 1,00,000/-.

The Respondent was supposed to reside at the residence of his mother in Ahmedabad and was directed to surrender on the expiry of the leave. On the request of the Additional Public Prosecutor, the Single Judge of the High Court stayed the Impugned Order dated 24-06-2021 for a period of three weeks. By an Order dated 06-08-2021, the implementation of the Impugned Order was stayed until 13-08-2021.

Thereafter, a Special Leave Petition was filed by the State of Gujarat against the Impugned Order dated 24-06-2021 in the Hon’ble Supreme Court of India. The Apex Court stayed the implementation of the Impugned Order.

After taking into consideration the facts of the case and the arguments advanced by the Parties to the dispute, the Bench while placing reliance on the Rules observed that these Rules were made in pursuance to Section 59 of the Prisons Act 1894 (Act) and are applicable in the State of Gujarat. Under Section 59(5) of the Act, the State Government is empowered to make rules for the award of marks and shortening of sentences.

The Apex Court while referring to the decisions in the case of State of Maharashtra v. Suresh Pandurang Darvakar (2006) 4 SCC 776; State of Haryana v. Mohinder Singh 1 (2000) 3 SCC 394 and Asfaq v. State of Rajasthan 2 (2017) 15 SCC 55 held that a balance has to be maintained between two competing interests while granting parole or furlough- that of reforming the convict on one hand and the public purpose and interests of society on the other.

Thus while allowing the Appeal and setting aside the Impugned Judgment and Order of the High Court dated 24-06-2021, the Bench observed as following:

“The Order dated 8 May 2021 has adduced a number of circumstances which cumulatively indicate that the release of the Respondent on furlough may lead to a violation of public peace. The Order refers specifically to the threat he and his followers pose to the complainant and other persons who deposed at the trial. An attempt has been made to threaten and suborn the investigating team and the witnesses. The Respondent and his father have a mass following of persons who owe loyalty to them and there is a reasonable apprehension of a disruption of public peace and tranquillity. During the trial, attempts have been made to bribe public officials. The conduct after the trial, in jail, has not been shown to be above reproach. The Respondent was released earlier this year to accommodate a genuine need to attend to his mother’s health at the relevant time. Based on this, we are unable to agree with the line of reasoning of the High Court.”