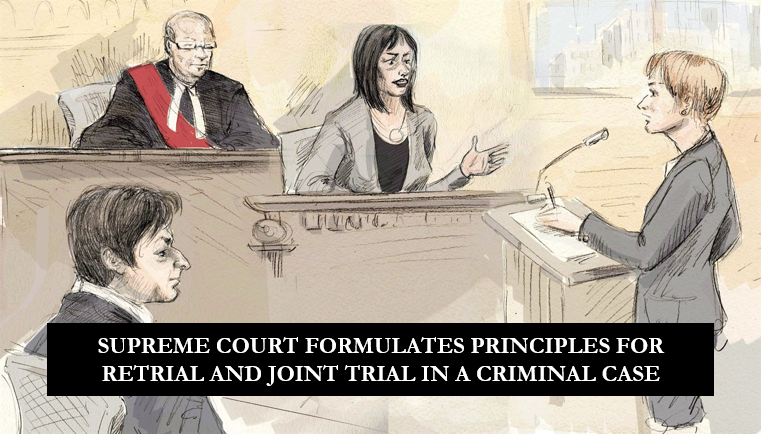 A three Judges Bench of the Hon’ble #SupremeCourt of India comprising of Justices Dr. DY Chandrachud, Vikram Nath and BV Nagarathna, in the matter of Nasib Singh vs State of Punjab and Another [2021 SCC Online SC 924] vide its #Judgment dated 08-10-2021 formulated #principles governing the power of #Courts to direct #retrial, joint trial, and separate trial in a #criminal case.

In this case, an First Information Report (‘FIR’) No. 96/2012 under Sections 363, 366A, 376, 328 and 34 of the Penal Code, 1860 was registered by one, Mr. Nasib Singh, Sub-Inspector (SI), in charge of the Police Station at Ghagga, Badshahpur (the ‘Appellant’) against Mr. Balwinder Singh, Mr. Gurpreet Singh alias Aman and Mr. Sandeep Singh (‘Accused’) on 26-11-2012 for committing sexual assault on the Prosecutrix. On 26-12-2012, the Prosecutrix committed suicide leaving behind a suicide note and named the Accused to be responsible for her decision to end her life. As a result, the Appellant immediately arrested the Accused.

On the other hand, on 26-12-2012, another FIR No. 100/2012 was registered at the same Police Station against the Appellant (Nasib Singh, SI) implicating him with the other Accused in FIR No. 96/2012 for abetting the suicide of the Prosecutrix. It was alleged that though the Appellant received information from the Prosecutrix, no arrest was made and a proper investigation was not conducted. On 31-12-2012, another FIR No. 187/2012 was registered against the Accused for an offence punishable under Section 306 read with Section 34 of the Indian Penal Code (IPC) at Police Station Samana having jurisdiction over the matter.

The Additional Sessions Judge, Patiala, convicted the Accused in the trial and acquitted the Appellant on the ground that there was nothing on record to prove that he had conducted a tainted investigation under FIR No. 96/2012 and FIR No. 187/2012 vide its Judgments dated 29-11-2014 and 29-01-2015, respectively.

The Respondent had filed Appeals against the Judgments dated 29-11-2014 and 29-01-2015 passed by the Additional Sessions Judge, Patiala before the High Court of Punjab and Haryana (‘High Court’). The acquittal of the Appellant was challenged under these Appeals by the Respondent. The High Court vide its common Judgment dated 20-12-2019 disposed off the Appeals. The High Court directed and remitted the matters to the Additional Sessions Judge, Patiala to be tried together, as provided under Section 223 of the Code of Criminal Procedure 1973 (‘CrPC’) (What persons may be charged jointly). The High Court observed that there was apparent failure of justice in this case and hence, there is a necessity to remit back the case for retrial.

Aggrieved, the Appellant filed an Appeal before the Supreme Court of India against the common Judgment dated 20-12-2019 passed by the High Court. The Apex Court discussed the power to direct retrial under Section 386 of CrPC (Power of the Appellate Court). As per Section 386 (a), the Appellate Court may in an appeal from an order or acquittal, reverse such order and direct that further inquiry be made, or that the accused be re- tried or committed for trial, as the case may be, or find him guilty and pass sentence on him according to law.

The Supreme Court discussed several cases on the point and formulated the principles on retrial, which are as follows:

The Apex Court also pointed that the High Court in the impugned Judgment observed that the separate trials in FIR No 96/2012 and FIR No. 187/2012 led to a miscarriage of justice, but no analysis has been undertaken to explain the finding. Moreover, the High Court has only observed that there ‘may’ be a miscarriage of justice. In this regard, the Supreme Court observed and held that it is evident that a retrial would be a matter of serious prejudice since vital evidence which has been recorded during the course of the trials would be obliterated.

Therefore, the Apex Court set aside the High Court Judgment dated 20-12-2019 and as a result, the Criminal Appeals which have been disposed off by the High Court shall stand restored for fresh disposal on merits.