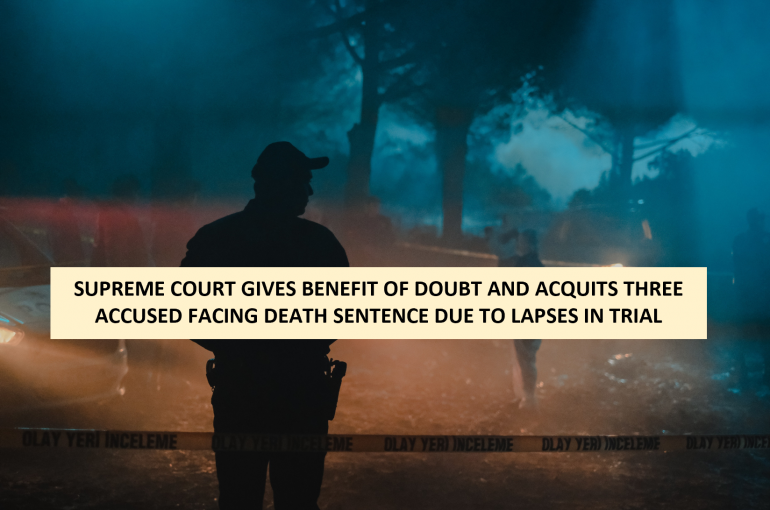 In a recent case of Rahul vs State of Delhi, Ministry of Home Affairs and Anr. Criminal Appeal No. 611 of 2022 and two other connected matters, a three Judge Bench of the Supreme Court comprising of the then Chief Justice of India (CJI) Uday Umesh Lalit, Justice Ravindra Bhat and Justice Bela M. Trivedi passed a Judgment dated 07-11-2022 and gave the benefit of doubt and acquitted the Accused-Appellants, who were facing death penalty for committing the heinous offence of gangrape and murder of a 19-year old woman in Delhi in 2012, due to lapses in trial, etc.

1) Report of Incident to Police- In this case, the Police Station, Chhawla received an information from the Police Control Room on 09-09-2012 at 9.18 pm that a woman was kidnapped in a red-coloured Tata Indica Car near Chhawla area. The said information was recorded as DD No. 27 A.

2) Witness Statement- One, SI Prakash Chand, along with his team immediately reached the spot, and recorded the statement of one, Saraswati, who was present with the Victim at the time of the incident. She stated that around 8.45 pm on 09-09-2012, when she was returning from her job at DLF Gurgaon along with the Victim and her other friends, a red-coloured Tata Indica Car came from behind and one man forcibly pulled the Victim inside the Car. There were 4-5 other boys also present in the Car. On the basis of her Statement, a First Information Report (FIR) was registered under Section 363 of the Indian Penal Code 1860 (IPC) (Punishment for kidnapping).

i) ASI, Rajender Singh produced the Accused-Rahul, who was apprehended near Sector-9 Dwarka area in a red- coloured Tata Indica Car on 13-02-2012, before Inspector Sandeep Gupta.

ii) During the interrogation, the Accused confessed that he along with his brother Ravi and one, Vinod had kidnapped the Victim from Qutub Vihar, then committed rape on her, killed her and then threw the dead body in the fields near Jhajjar, Haryana. Thereafter, all the three Accused-Appellants were arrested. The statements of the other two Accused were also recorded, wherein they admitted to the aforesaid offences. The Accused were later sent for medical examination in Delhi.

iii) The Police also seized (a) the Tata Indica Car, (b) the Accused’s and the Victim’s mobile phone, (c) the Victim’s innerwear which she was wearing at the time of the incident and (d) the platter in which the Accused had burnt the articles belonging to the Deceased.

iv) The Police then recovered the body of the Deceased Victim near Rodai area and informed the P.S. Rodai, Rewari District. The Crime Team of P.S. Rodai then reached the spot and lifted (a) some hair strands from the Deceased’s body, (b) two plastic glasses, (c) one empty pouch of snacks, (d) a piece of earthenware pot, (e) a broken piece of red colored plastic bumper and (f) one wallet near the Victim’s body. Thereafter, the Deceased’s body was sent to Civil Hospital, Rewari for post-mortem examination.

v) The investigation was further transferred to Inspector Ranjeet Singh on 15-12-2012, who then sent (a) the Tata Indica Car, (b) the hair strands and seat covers found in the Car and (c) the other articles lifted from and near the Victim’s body and also (d) the DNA reports on the seized articles, to the Central Forensic Science Laboratory (CFSL) for their examination.

1) Upon completion of investigation, a Charge Sheet was filed before the concerned Court which was then committed to the Additional Sessions Judge, Special Fast Track Court, Dwarka Courts, New Delhi (Trial Court) in Sessions Case No. 91/2013 and the following charges were framed against the Accused:

i) Section 365 IPC (Kidnapping or abducting with intent secretly and wrongfully to confine person) read with Section 34 IPC (Acts done by several persons in furtherance of common intention),

3) The Trial Court relying upon the evidence placed by Prosecution and by the Accused-Appellants, passed an Order dated 19-02-2014 and convicted all three Accused-Appellants for the aforesaid charges except Section 377 / 34 IPC and sentenced them as follows:

Aggrieved, the Accused-Appellants filed Appeals before the Supreme Court. The Apex Court vide Judgment dated 07-11-2022 made the following observations in this case:

i) the circumstances from which an inference of guilt is sought to be drawn, must be cogently and firmly established,

ii) those circumstances should be of a definite tendency unerringly pointing towards guilt of the accused,

iii) the circumstances, taken cumulatively, should form a chain so complete that there is no escape from the conclusion that within all human probability the crime was committed by the accused and none else; and

2) But in view of the aforesaid principles, the Prosecution in the present case has not been able to establish the guilt of the Accused-Appellants based on the circumstantial evidence:

(i) That although the Witness Statements corroborated the incident of kidnap, but the Prosecution Witnesses who were present at the time of the incident, did not identify the Accused during the course of their respective depositions before the Trial Court. One of the Witnesses claimed that there was darkness and the others claimed that the Accused had covered their faces. Further the I.O.s had also not conducted any Test Identification (T.I.) Parade during the course of their respective investigations. Thus, the very identity of the Accused-Appellants was itself not duly established.

(ii) That the Prosecution Witnesses also could not identify whether the Car being driven by Accused-Rahul at the time he was apprehended by the Police on 13-02-2012, was the same red-coloured Tata Indica Car in which the Victim was kidnapped. They had not even seen the Car registration number at the time of the incident. Thus, the circumstances under which the Accused-Rahul was apprehended created a cloud of doubt in the story put forth by the Prosecution.

(iv) Further, there was no clarity regarding the time of the Police reaching the spot where the Victim’s body was found lying and as to who reached the place first. The depositions of the ASI, Head Constable, SHO P.S. Chhawla, P.S. Rodai, Dist. Rewari, etc are all contradictory as to how and when they reached the said spot.

(v) Furthermore, the Trial Court committed grave error in allowing the confessions made by the Accused before the Police to be admitted as evidence, although the same was hit by Section 25 of the Evidence Act (Confession to police-officer not to be proved).

(vi) Moreover, the articles that were said to be recovered from and near the Deceased’s body as per the Prosecution, was not corroborated by other Prosecution Witnesses and the photographer and there was no mention in the seizure memo as well. Further, there was no conclusive opinion provided by the Central Forensic Science Laboratory (CFSL) regarding connection of the seized articles with the Accused. Hence, those articles could not be said to be connected with the Accused.

(vii) The phone call details were also not proved by the Prosecution in terms of Section 65 B of the Evidence Act (Admissibility of electronic records).

(viii) The incident of kidnapping happened on 09-02-2012 and the body was recovered on 13-02-2012. Hence, the time of death was highly crucial, but the Post Mortem Report was not clear on the time of death.

(ix) The DNA forensic evidence was also not scientifically or legally proved and hence, it cannot be used as a circumstance against the Accused.

Thus, based on the aforesaid observations, the Supreme Court observed that (a) various material prosecution witnesses were not cross-examined or were not adequately examined, (b) cogent or clinching evidence was not brought on record to prove the guilt of the Accused and (c) the circumstantial evidence placed on record by Prosecution could not establish the guilt of the Accused beyond reasonable doubt.

The Supreme Court also observed that there were many lapses during the course of trial, as a result of which the Accused-Appellants were deprived of their right to have a fair trial. The Trial Court also did not exercise its discretionary power under Section 165 of the Indian Evidence Act 1872 (Judge’s power to put questions or order production) to elicit the truth of the material witnesses during their cross examination.

Thus, the Apex Court allowed the Appeals and set aside the Trial Court and High Court Orders and thereby, acquitted the Accused-Appellants by giving them a benefit of doubt. Further, the Bench held that the Victim’s parents would be entitled to compensation under Section 357 A CrPC (Victim compensation scheme).

Under the criminal law, the golden rule is that the accused must be proved guilty beyond reasonable doubt. By and large, it is often noticed that due to lapses and gaps in the investigation, the accused’s guilt is not proved beyond reasonable doubt. This, sadly, allows the accused to escape punishment thereby encouraging them to do further criminal acts. It also encourages the accused who have been caught committing a crime to bribe the police to leave loose ends. The net result is that there is an increase in crime rate and of late, in heinous crimes, which as in the present case, the Accused have been acquitted for want of proper and correct investigation.