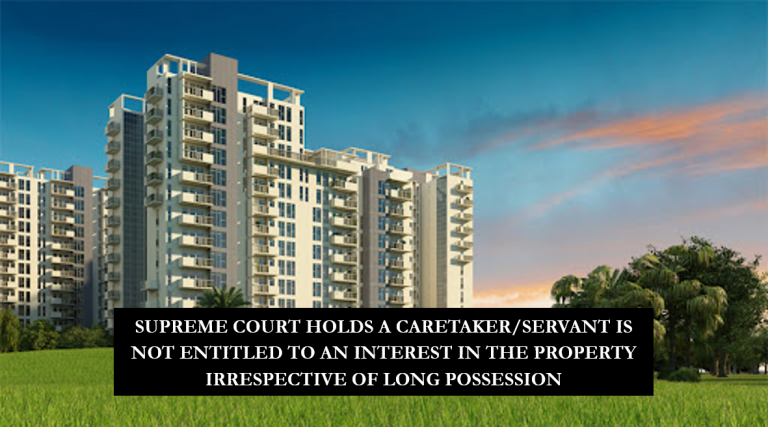 A Two Judge Bench of the Hon’ble #SupremeCourt of India of Justices Ajay Rastogi and Abhay S. Oka passed an Order dated 16-09-2021 in the case of Himalaya Vintrade Pvt. Ltd. v. MD. Zahid & Anr. Civil Appeal No. 5779 of 2021 arising out of SLP(C)No.5730 of 2021 and observed that despite of long #possession, a #Caretaker/servant can never acquire #interest in the #Property.

The case of the Plaintiff- Respondent No. 1 was that he was in the possession of the subject property as a caretaker/servant. The Plaintiff was a servant/caretaker of “A” schedule property and the sole owners of the said property allowed the Plaintiff to use and reside in all the three rooms and one godown along with some vacant land described in the “B” schedule. Thereafter, the Defendant tried to dispossess from his lawful occupation as servant/caretaker with a view to grab the occupation/residence.

The Plaintiff- Respondent No. 1 filed a suit asking for the following reliefs:

Subsequently, the Notice was served. The Appellant-Defendant filed an Application under Order VII Rule 11, Code of Civil Procedure, 1908 (CPC) with an objection that the Suit filed by the Plaintiff- Respondent No. 1 who pleaded himself as caretaker/servant, acquires no interest in the subject property irrespective of his long possession, is not maintainable under the law. As far as the plea of adverse possession is concerned, it lacked material particulars.

The said Application was dismissed by the Trial Judge on the premise that the dispute can be examined only after the written statement is filed by the Appellant-Defendant and is not within the scope of Order VII Rule 11, CPC. This view was confirmed by the High Court.

Aggrieved, an Appeal was filed in the Hon’ble Supreme Court of India. After taking into consideration the facts and material placed on record, the Hon’ble Supreme Court of India observed that the Trial Court erred in taking into consideration the pleadings on record from the plaint filed at the instance of Respondent no.1-Plaintiff who as a caretaker/servant can never acquire interest in the property irrespective of his long possession and the caretaker/servant has to give possession on demand.

In this regard, the Bench observed as follows:

“In our considered view, the order of the Ld. Trial Judge which has been confirmed by the High Court impugned in the instant proceeding is not sustainable on the first principles of law.”

Thus, the Apex Court while allowing the Appeal quashed and set aside the Order of the High Court. Furthermore, the Plaint was rejected and the Plaintiff/Respondent No.1 has been directed to handover, vacant and peaceful possession of the subject property in question free from all encumbrances within three months.