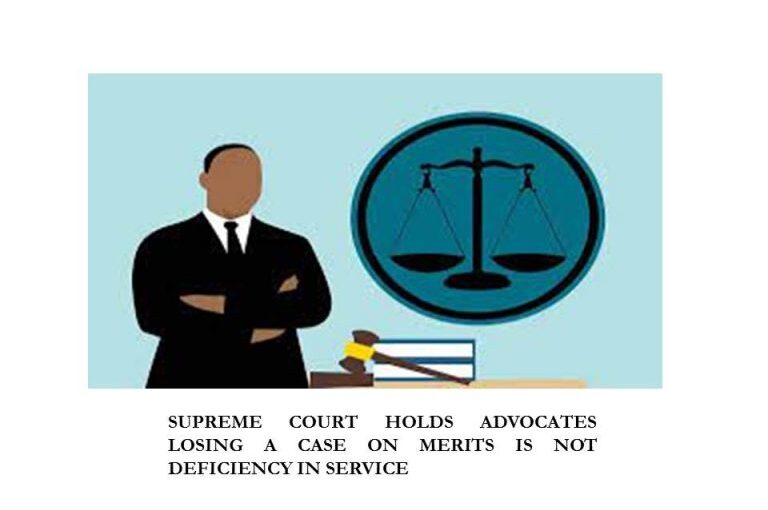 A Two Judge Bench of the Hon’ble #SupremeCourt of India comprising of Justices M.R. Shah and B.V. Nagarathna vide an Order dated 08-11-2021 in the case of Nandlal Lohariya v. Jagdish Chand Purohit and others {Special Leave Petition(C) Diary No.24842 Of 2021} held that an #advocate #losing a case after arguing is not a ground for filing a #Consumer #Complaint as the same does not amount to ‘#Deficiency in Service’.

Subsequently, the Petitioner filed an Appeal before the Rajasthan State Consumer Disputes Redressal Commission (SCDRC) which was also dismissed. Aggrieved, the Petitioner preferred a Revision Petition No. 380/2019 and Review Application No. 348/2019 in Revision Petition No. 380/2019 before the National Consumer Disputes Redressal Commission (NCDRC).

By virtue of Judgment and Order(s) dated 25-11-2019 and 07-01-2020 the learned National Commission dismissed the said Revision Petition and the Review Application respectively and confirmed the Orders passed by the SCDRC.

Aggrieved and dissatisfied by the Impugned Judgment and Order(s) dated 25-11-2019 and 07-01-2020 passed by the NCDRC, the Petitioner approached the Hon’ble Supreme Court of India. After taking into consideration, the facts of the case and the arguments advanced by the Parties, the Apex Court held that the District Forum, the State Commission and the National Commission were right in dismissing the Complaints filed by the Petitioner against the three Advocates. The District Forum did not find any deficiency in service or negligence on the part of the Advocates in prosecuting and/or conducting the complaints. “Once the complaints came to be dismissed on merits and there was no negligence on the part of the Advocates at all, it cannot be said that there was any deficiency in service on the part of the Advocates who appeared on behalf of the Complainant and lost on merits…..the complaint filed by the petitioner – complainant against the three Advocates was liable to be dismissed and is rightly dismissed by the District Forum and the same has been rightly confirmed by the State Commission and thereafter by the National Commission.”

Therefore, the Apex Court observed that there is no substance in the Special Leave Petitions and dismissed the same on the ground of delay as well as on merits.

Editor’s Comments: The Apex Court has by rejecting the Appellant’s Plea, that if a lawyer loses a case, he is deemed to be deficient in services, is a big relief for the legal community as had the Court accepted the Appellant’s plea it would have opened flood gates of meaningless litigation. No lawyer can assure a Client of the certainty of winning a case. The Appellants approach in asserting that as the lawyers had lost the case, they were deemed to be deficient in services is flawed thinking.