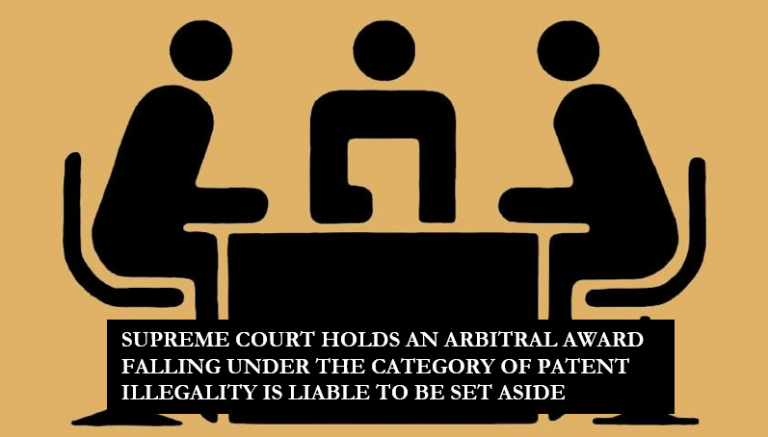 A Two Judge Bench of the Hon’ble #SupremeCourt of India comprising of Justices RF Nariman and B.R. Gavai passed a Judgment dated 28-07-2021 in the case of PSA SICAL Terminals (P) Ltd. v. V.O. Chidambranar Port Trust, Civil Appeal Nos. 3699-3700 of 2018 and held that the Arbitral Tribunal cannot rewrite the #Contract for the Parties to the dispute and an #ArbitralAward which is based on no evidence or is in ignorance of vital #evidence falls within the category of “#patentillegality”.

In the present case, the Respondent No. 1 ­The Board of Trustees of V.O. Chidambranar Port Trust, Tuticorin (“TPT”) had issued a global tender on 09-04-1997 for inviting bids for development of the Seventh Berth at V.O. Chidambranar Port, Tuticorin as a Container Terminal and for operating and maintaining the same for 30 years on a Build, Operate and Transfer basis (“BOT”). In the year 1998, the Trust awarded a tender to the Appellant− PSA Sical Terminals Pvt. Ltd. (SICAL). Thereafter, a Letter of Intent (LoI) was issued on 29-01-1998 and a License Agreement (Agreement) dated 15-07-1998 was entered into between the Parties.

In 2012, the Appellant invoked the Arbitration Clause in the Agreement. The Arbitral Tribunal vide Order dated 14-02-2014 passed an award in favour of the Appellant and directed the conversion of royalty model to revenue sharing model. Subsequently, the Respondent No. 1 filed a Petition under Section 34 of the Arbitration and Conciliation Act, 1996 (Act) for setting aside of the Arbitral Award. However, this Petition was rejected by the District Judge, Tuticorin vide Order dated 25-02-2016. Against this, the Respondent No. 1 filed an Appeal in the High Court of Madras (High Court) and the Division Bench of the Madras High Court vide Order dated 01-11-2017 in C.M.A. (MD) No. 345 of 2016 and C.M.P. (MD) No. 4867 of 2016, allowed the Appeal of the Respondent No. 1 under Section 37(1)(c) of the Act and set aside the award made by the Arbitral Tribunal.

Aggrieved, the Appellant-Company approached the Hon’ble Supreme Court of India by filing a Civil Appeal. After taking into consideration the arguments advanced by the Parties to the dispute and placing reliance upon plethora of judgments including MMTC Ltd. v. Vedanta Ltd., (2019) 4 SCC 163 and SsangYong Engg. & Construction Co. Ltd. v. NHAI, (2019) 15 SCC 131, the Apex Court observed that it is a well settled legal position that in an application for setting aside an Arbitral Award filed under Section 34 of the Act, the Court does not act as an Appellate Court and reappreciate the evidence. Under Section 34 of the Act, the scope of interference is limited to the grounds as prescribed under the section/provision. Interference would be warranted when the award is in violation of public policy of India and a judicial intervention that eventually interferes with the merits of the award would not be permissible. Awards that are against the conscience of the Court can be set aside for being in conflict with justice or morality. Principles of natural justice as enshrined under Sections 18 and 34(2)(a)(iii) of the Act are the grounds of the challenge of an award. Also, an award can be set aside on the ground of “patent illegality”.

On the issue of whether the Arbitral Tribunal was justified in substituting royalty payment model to revenue sharing model, the Court opined that:

“A contract duly entered into between the parties cannot be substituted unilaterally without the consent of the parties.”

After examining the documents on record, the Bench noted that the Appellant wanted the License Agreement to be amended to change royalty payment method to revenue sharing method. The Respondent No. 1 opposed it and did not agree to any such an amendment. The Court while noting that Arbitral Tribunal ignored the stand of the Respondent No. 1 to thrust upon a new term in the License Agreement, the Apex Court observed as follows:

Furthermore, the Court reiterated that a party to the Agreement cannot be made liable to perform something for which it has not entered into a contract, the Court concluded that:

“In our view, rewriting a contract for the parties would be breach of fundamental principles of justice entitling a Court to interfere since such case would be one which shocks the conscience of the Court and as such, would fall in the exceptional category.”

Thus, while dismissing the Appeal, the Supreme Court opined that the impugned Order dated 01-11-2017, passed by the Arbitral Tribunal would fall under the category of “patent illegality” and therefore, the High Court committed no error in setting aside the same.