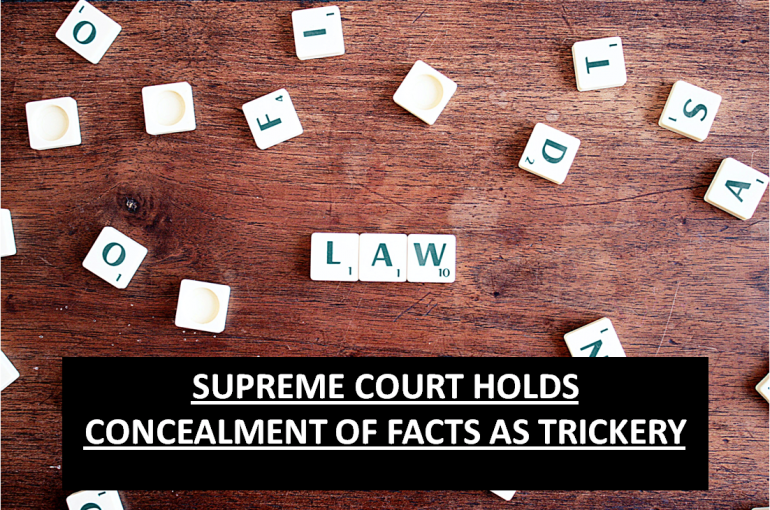 A two Judge Bench comprising of Justice BR Gavai and Justice CT Ravikumar decided on 12.09.2022 in the matter titled as Yashoda vs Sukhwinder Singh & Others that suppression of a material fact i.e.,filing and withdrawal of a suit for declaration , in a suit for specific performance was correctly decided by the Trial Court while  dismissing the said suit.

The Supreme Court quashed the judgment passed by a Single Judge Bench of the Punjab and Haryana High Court and held that “there is an essential distinction between mistake and trickery. In the present case, it is sought to be argued on behalf of the respondents­ plaintiffs that the averment in paragraph (15) of the plaint was with regard to a lis on the basis of the agreement. It is submitted that the earlier suit was not based on the agreement and as such, there was no suppression. We find the argument to be unsustainable. We are of the view that such a statement was made as a trickery so as to obtain the judgment by misleading the court.”

The Original Plaintiff had entered into an Agreement to Sell the agricultural lands on 10.01.1993 with the Appellant defendant in furtherance to which a Sale Deed was to be executed before 15.03.1994 as per the Plaintiff. The Plaintiff also filed a suit for declaration initially against the Appellant Defendant on the basis of the family settlement that had taken place however, it was withdrawn by the Plaintiff itself. Subsequently, the Plaintiff filed before the trial court seeking specific performance of the Agreement to Sell which was also dismissed. The Court of the ADJ allowed the appeal and decreed the suit of the plaintiff for specific performance of the agreement to sell. Further the Hon’ble High Court of Punjab and Haryana upheld the same. Aggrieved by the Orders, the Appellant Defendant appealed before the Supreme Court.

Senior Counsel Sidharth Luthra appeared on behalf of the Appellant-Defendant and submitted that the Appellate Court   erroneously   accepted   the   stand   of   the   Plaintiff in the Replication which said that the earlier suit was filed only in order to save the stamp duty and registration charges and allowed the appeal. The act of the Respondents­Plaintiff   of   suppression   of   material   facts i.e. non disclosure of the earlier declaration suit amounted to fraud.

Supreme Court Senior Counsels Narender Hooda and Gagan Gupta appeared on behalf of the Respondents-Plaintiff submitted that the declaratory suit was on the matter of possession and the present suit is on Agreement to Sell, therefore, no fraud has been done by the Respondents-Plaintiff. Mr.Hooda submitted that the alleged concealment is not fraud under Order II Rule 2 of the Civil Procedure Code, 1908.  Mr.Gupta further relied on various judgments including Union of India v. M/s Chaturbhai M. Patel and Co (1976) 1 SCC 747 that holds that fraud needs to be proved beyond reasonable doubt. Relevant parts of the judgment replied upon is reproduced below :

“21. Now, it is well settled principle of law that if any judgment or order is obtained by fraud, it cannot be said to be a judgment or order in law. Before three centuries, Chief Justice Edward Coke proclaimed: “Fraud avoids all judicial acts, ecclesiastical or temporal.”

The Supreme Court after hearing both the parties observed that there was no dispute with respect to filing of an earlier declaratory suit by the Plaintiff and also that the Agreement to Sell was done prior to the declaratory suit, yet the plaint did not mention it anywhere. Hence, the Replication was filed as an afterthought only to cure the lacuna as pointed out in the written statement, when the objection was raised with respect to the earlier suit. Therefore, such an omission is misleading on the part of the Respondents-Plaintiff. The Hon’ble Court further concluded in its judgment that the contention that the earlier suit was not based on the Agreement to Sell and that there was no suppression/concealment was unsustainable and hence unacceptable.

The Apex Court affirmed that the statement was misleading and in the form of trickery to obtain a favorable judgment by relying on catena of judgments including AV Papayya Sastry and Others vs Govt. of AP and Others (2007) 4 SCC 221 wherein it was held that :

“Having regard to the discussion made supra, in our considered opinion, it is a clear case of contempt committed by Respondent 4 by repeatedly approaching the courts of law for almost the same relief which was negatived by the courts for three decades. However, we decline to initiate contempt proceedings and to impose heavy costs, under the peculiar facts and circumstance of this case“, therefore, the Court observed that there is an essential distinction between mistake and trickery.”

The Hon’ble Apex Court upheld the Trial Court’s reasoning that a person cannot be permitted to assume inconsistent positions in a court of law to play fast and loose and to blow hot and cold. Referring to a series of judgments passed by the Trial Court and High Court, the Supreme Court court took the view that “It could thus be seen that there is total non application of mind by the High Court. The High Court did not even care to refer to the grounds raised in the appeal with regard to the effect of non­disclosure of filing and withdrawal of the earlier suit.” The Supreme Court further held that the High Court had passed orders on factually erroneous premises and that the judgment of the High Court was passed without application of mind and further held that “The High Court has gone on a premise that the trial court had decreed the suit and the Appellate Court has dismissed the appeal. This is factually erroneous.”

The Supreme Court allowed the appeal and upheld the judgment passed by the Trial Court and directed to set aside the judgments and orders passed by Appellate Court and the High Court.