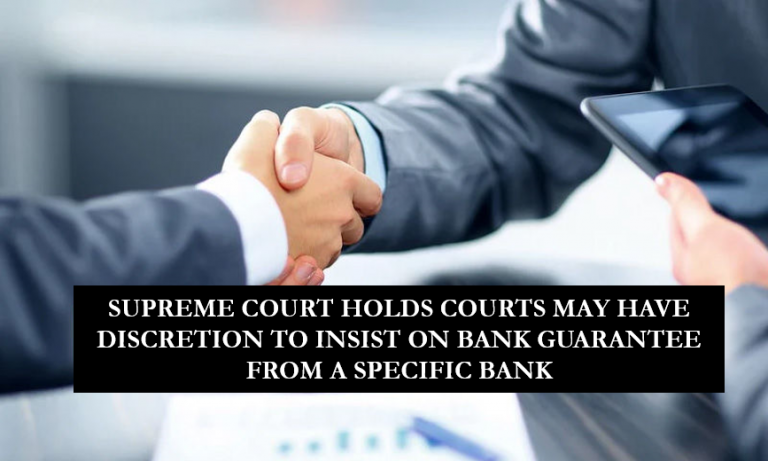 A Two Judge Bench of the Hon’ble #SupremeCourt of India comprising of Justices Indira Banerjee and V. Ramasubramanian passed a #Judgment dated 24-08-2021 in the case of Sepco Electric Power Construction Corporation V. Power Mech Projects Ltd. Civil Appeal Nos.4936-4937 Of 2021 Arising out of SLP (C) NOS. 11476-11477 of 2021 and observed that the Court has a #discretion to insist on a #bankguarantee from any specific bank or class of banks to safeguard the interests of the beneficiary of the bank guarantee.

In the present case, SEPCO Electric Power Construction Corporation (SEPCO) (Appellant) is an entity which was incorporated in China and was awarded contracts in relation to various coal-based power projects in India. Power Mech Projects Limited (Power Mech) (Respondent) is a Company which is incorporated in India and engaged as a sub-contractor of the Appellant. Thereafter, disputes and differences arose between the Appellant and the Respondent and the matter was referred to arbitration. Subsequently, an Award dated 17-10-2017 was passed by the Arbitrator to the tune of approximately Rs. 1,42,00,00,000.00 in favour of the Respondent. Thereafter, on 03.12.2017, the Appellant filed an Application under Section 34 of the Arbitration and Conciliation Act, 1996 (Act), challenging the Arbitral Award dated 17.10.2017 in the Commercial Division of the High Court of Delhi (High Court), which is pending.

Thereafter, the Appellant produced a Bank Guarantee of Industrial and Commercial Bank of China Limited (ICBC) for a sum of Rs. 30 Crores. An Interim Application was filed by the Respondent seeking a bank guarantee of a “Scheduled Indian Bank” rather than ICBC as per the order of the Court. In response to this, another Interim Application was filed by the Appellant before the High Court seeking acceptance of the ICBC Bank Guarantee, however the same was refused. Against this refusal order, the Appellant filed an Appeal under Section 37 of the Act read with Section 13(1A) of the Commercial Courts Act 2015 before the Supreme Court. The Appeal was dismissed vide Order dated 27.11.2020.

Subsequently, a Special Leave Petition was filed in the Hon’ble Supreme Court against the Order dated 27.11.2020. While deciding the maintainability of the Appeal, the Apex Court opined that the High Court Order dated 12.02.2019 was an order granting interim relief under Section 9 of the Act, directing the Appellant to furnish a bank guarantee issued by a Scheduled Indian Bank. The Appellant per se was not aggrieved from the direction of furnishing a bank guarantee but was aggrieved from the direction, that the bank guarantee should be of a Scheduled Indian Bank only.

After taking into consideration the arguments advanced by the Parties to the dispute, the Bench held that Court has a discretion to insist on a Bank Guarantee from any specific bank or class of banks to safeguard the interests of the beneficiary of the Bank Guarantee.

Further, if the Petitioner had any doubts, it should have sought clarification from the High Court itself, before obtaining the Bank Guarantee from ICBC Bank. Failing which, it cannot now raise this issue before the Apex Court.

Lastly, Justice V. Ramasubramanian made the following observations in this case:

“23.In my humble considered view, these special leave petitions do not deserve to be entertained under Article 136 of the Constitution of India in view of the fact (i) that the very same Judge who passed the first Order dated 12.02.2019, clarified the same by his subsequent Order dated 09.04.2019; (ii) that the same learned Judge dismissed on 16.05.2019, the petition to recall the Order dated 09.04.2019; (iii) that the Commercial Division Bench of the High Court dismissed the appeal arising out of the Order dated 16.05.2019; and (iv) that the Commercial Division Bench again reiterated its orders, by dismissing the review petition. We must remember that all this arose out of an interim measure under Section 9 of the Act and the petitioner is seeking to upset all of this in a petition under Article 136 of the Constitution as though there is a substantial question of law of great importance.”

Observation of the Division Bench of the Hon’ble Supreme Court:

Although Justice Indira Banerjee was of the view that that the Appeal should be allowed, but Justice V. Ramasubramanian opined that since there was no substantial question in the Appeal, the Special Leave Petition should be dismissed.

Hence, as Justice Indira Banerjee and Justice V. Ramasubramanian passed different observations, the matter has been placed before the Chief Justice of India for appropriate directions.