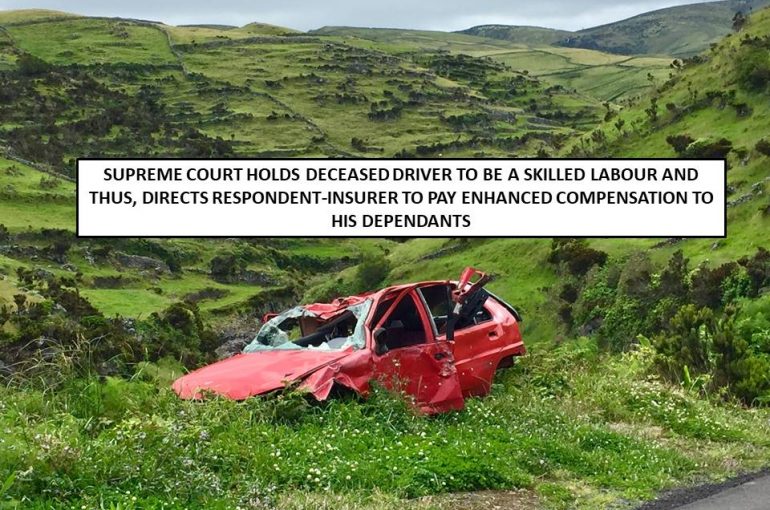 SUPREME COURT HOLDS DECEASED DRIVER TO BE A SKILLED LABOUR AND THUS, DIRECTS RESPONDENT-INSURER TO PAY ENHANCED COMPENSATION TO HIS DEPENDANTS

A two Judge Bench of the Supreme Court comprising of Justice Surya Kant and Justice Aniruddha Bose, passed a Judgment dated 17.10.2022 in the case titled as Manusha Sreekumar & Ors. v. The United India Insurance Co. Ltd. in Civil Appeal No. 7593 Of 2022 and held that drivers can be classified as skilled labor under “Category-III Skilled-B” of the Kerala Motor Transport Workers’ Payment of Fair Wages Act,1971 and hence, upon their death, their dependants are entitled to enhanced compensation.

On the way from Thalayolaparambu to Ernkulam Road, (Kerala), a 32 year old Sreekumar (Deceased) while riding his motorcycle bearing Registration No. KL36C9198 met with a fatal accident dated 21.02.2015. This accident occurred due to the rash and negligent driving of a car by the Accused bearing Registration No. KL07BB5053. The Accused’s car was insured by the United India Insurance Co. Ltd (Respondent). As a result of such accident, the Deceased got multiple serious injuries. Multiple efforts were made to save him but the life of the Deceased could not be saved.

Thereafter, the Deceased’s wife (First Appellant), their minor son (Second Appellant) and his mother (Third Appellant) jointly preferred a Claim Petition before the Motor Vehicle Accidents Claims Tribunal, Pala (“Tribunal”) under Section 166 (Application for compensation) of the Motor Vehicles Act, 1988 (“Act”) seeking compensation of Rs. 64,15,000/-with interest. The said Claim was backed with multiple grounds like loss of dependency, pain and sufferings, transport to hospital, funeral expenses etc. and for each of the aforementioned grounds various documentary pieces of evidence were submitted and proved before the Tribunal. After applying judicial mind, the Tribunal vide Order dated 26.07.2018 awarded total compensation of Rs. 32,39,000/ with interest at the rate of 9% per annum from the date of filing the Petition till realization of awarded compensation.

Aggrieved by the High Court’s Order dated 23.07.2019, the Appellant preferred an Appeal before the Supreme Court.

In the said Appeal, one, Mr. Thomas P. Joseph, Learned Senior Counsel on behalf of the Appellants submitted that the Appellants produced sufficient documentary evidence to prove the income of the Deceased. Further, none of the said evidence was taken into consideration by the High Court while passing the Order. Thus, the Judgment passed by the High Court cannot be considered to be on merits. Further, the Deceased was entitled to be considered as a ‘driver’ as per the Kerala Motor Transport Workers’ Payment of Fair Wages Act, 1971 (hereinafter, “Kerala Fair Wages Act”). Further, vide Notification G.O. (Ms.) No. 123/2015/LBR dated 04.09.2015 issued by the Government of Kerala, the said driver had fixed income which was overlooked by the High Court.

The Learned Senior Counsel on behalf of the Respondents put forth his arguments and reasoning aligning with the High Court Order.

1) That for determining the quantum of Compensation, the Supreme Court relied on the landmark Judgment of Sarla Verma and Ors. v. DTC and Ors. (2009) 6 SCC 121 which laid down three factors for calculating just compensation, namely, (a) age of the deceased; (b) income of the deceased; and (c) number of dependents of the deceased. Moreover, The Act being social welfare legislation operates through economic conception in the form of compensation, which renders way to corrective justice.

2) That on appraisal of evidences including the Deceased’s job training certificate at Sun Generic Cables Pvt. Ltd and Certificate of Kerala Motor Transport Workers Welfare Fund, etc, the Apex Court held that the Deceased was entitled to be considered as a skilled driver as per Kerala Fair Wages Act, which was overlooked by the High Court.

Thus, based on the aforesaid observations, the Supreme Court held that as the Deceased was a skilled driver in terms of the Kerala Fair Wages Act and based on the aforesaid factors to be considered for awarding just compensation, the Apex Court directed the Respondent to pay the enhanced compensation amount of Rs. 29,73,520/- to the Appellants along with interest at the rate of 9% per annum from the date of filing of the Claim Petition till the date of realization. Thus, the Appeal was allowed and High Court Order dated 23.07.2019 was set aside.